Hamas, Fatah no longer the only candidates in Palestinian elections 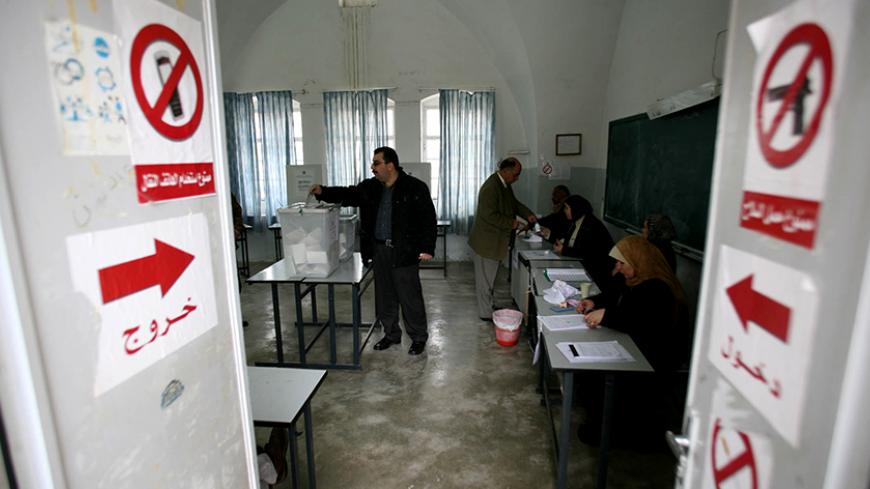 Palestinians cast their vote at a polling station in the West Bank town of Jenin, Jan. 25, 2006. - REUTERS/Ammar Awad

GAZA CITY, Gaza Strip — The Palestinian left-wing forces announced their intention to run in the Palestinian local council (municipal) elections slated for Oct. 8, in a unified list of five parties.

In a July 28, 2015, interview with a PFLP-affiliated website, Kayed al-Ghul, a member of the PFLP's political bureau, said, “The five left-wing factions — the PFLP, DFLP, PPP, FIDA and PNI — agreed to form a unified list consisting of figures affiliated with the democratic current to participate in the Oct. 8 local council elections.”

He explained that the list will include candidates that are competent and qualified to work in municipalities according to a service-based program that reflects the needs of the people and that makes positive and constructive contributions by exploiting all available resource in an optimal way.

Ghul added, “What is required now is to break the acute polarization between Fatah and Hamas plaguing the Palestinian society since the Fatah-Hamas dichotomy. This pushed the left-wing forces to unite and provide a unified vision with social dimensions that serve all Palestinians and not a particular movement.”

In regard to the possibility of an alliance between the left-wing forces and other Palestinian factions such as Islamic Jihad, Hamas or Fatah, Talal Abu Zarifa, a member of the DFLP’s political bureau, told Al-Monitor, “Contacts were made by Palestinian factions to participate [in the list] and form an alliance in the upcoming municipal elections, but the left-wing forces will not support or participate with any of those factions, and will only run in the elections in its unified list.”

On whether the left wing would gain a larger number of the votes through the unified list, Zarifa said, “Every stage has its specific circumstances. The 2006 elections are different from the 2016 elections. Today there is a [sharp internal] division and a deterioration of services provided to the citizens. We should not build on the number of votes obtained by the left-wing parties in the legislative elections in 2006, even if this serves as an indicator. The left-wing factions today are running in the elections in a unified list. There is a positive buzz in the media and the Palestinian street about this list.”

Hanna Nasir, the head of the Palestinian Central Elections Commission had announced that the local council elections in the West Bank, the Gaza Strip and the outskirts of Jerusalem will be held on Oct. 8, and that all requirements necessary to ensure the freedom and independence of elections in the West Bank and Gaza have been met and the Palestinian factions are preparing their electoral lists.

Walid Awad, a member of the political bureau of the PPP, talked to Al-Monitor about the unified list’s electoral program, saying, “We are preparing our lists in the Palestinian cities in Gaza. We will encourage youth and women to assume top decision-making positions, especially since the municipal elections will pave the way for holding legislative and presidential elections at a subsequent phase. We will set up services councils and try to cut taxes. Taxes will be mainly collected from large companies and allocated to implement development programs and do justice to the workers and the poor.”

Saleh Abdel Jawad, a professor of political science at Birzeit University, told Al-Monitor, “No faction alone can achieve a breakthrough in the municipal elections. If the left-wing forces unite they can achieve some [good] results, but on the ground, the supporters of the left-wing constitute a small proportion of society and even if these forces ran in the elections in a unified list, they cannot achieve surprising results. In the legislative elections in 2006, the left-wing forces ran in separate lists and only obtained 8% of the percentage of the votes and 8% of the total of seats in the PLC.”

All Palestinian political parties and factions signed a Charter of Honor on July 24 in regard to the local council elections. According to this charter, the parties shall see to the integrity of the electoral process, avoid all hindrances, respect freedoms and refrain from exerting any form of pressure or intimidation, levelling accusations of treason or atonement or committing violence against any of the lists and candidates, and respect the elections results.

Analyzing whether this unified left-wing list would break the polarization between Fatah and Hamas in Palestinian society, Habib said, “All positions are already taken, since the majority of the votes are distributed between Fatah and Hamas and every citizen in Gaza and the West Bank has well-known political orientations. I doubt the left-wing list will obtain a large number of votes.”

Writer and political analyst Talal Okal told Al-Monitor, “The list will not be able to break the polarization, as hoped by the left-wing leaders, but it might get a larger percentage of the votes in light of the adoption of the full proportional representation system in the West Bank and Gaza according to Law No. 1 of 2007 on general elections. The list would be able to meet the 8% electoral threshold and qualify to enter into genuine partnerships after the results of the local council elections.”

It should be noted that the Palestinian left-wing forces collectively obtained less than 10% of the votes in the second Palestinian legislative elections in January 2006, while some left-wing candidates did not meet the 2.5% threshold for individual candidates, which is the minimum share of the votes required to secure any representation in a legislature.