As electoral lists form in the runup to the local Palestinian elections, various political factions worry that tribal and family loyalties will trump political affiliations. 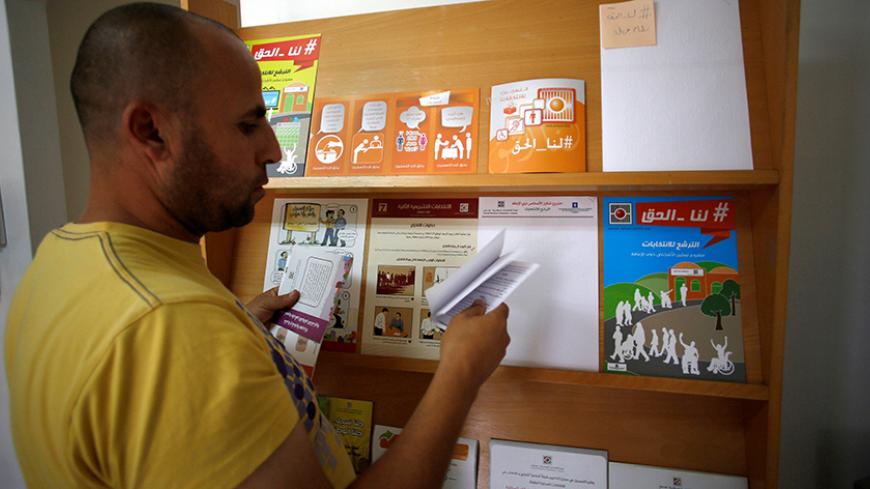 A Palestinian man reads voter pamphlets in the office of the Central Elections Commission in the town of El Bireh, West Bank, Aug. 17, 2016. - REUTERS/Mohamad Torokman

The countdown to the Palestinian local elections has begun. The atmosphere is tense, with remarkable participation by tribes and families in addition to the usual political forces.

Palestinian tribes started mobilizing immediately after the announcement of the electoral process and the major families started to prepare their candidates.

While dialogues and consultations to form electoral lists for the Oct. 8 election of 414 local councils in the West Bank and the Gaza Strip are ongoing, it's clear that families and tribes are asserting themselves in the various Palestinian regions. If this force proves to be the most powerful, the election will not be decided based on the candidates’ competencies and capabilities or on the provision of services and good governance, but rather on family affiliations. Some Palestinians fear that familism in the upcoming elections will break down the local social fabric and weaken the Palestinian national movement in some villages and towns.

The various political factions appear to agree that political affiliations will rule the day.

A source at the Central Elections Commission told Al-Monitor on condition of anonymity, “Since the start of the electoral process July 23, it has become clear that factions and tribes are taking advantage of each other. … A review of the Palestinian political forces’ lists shows that family kinships are accorded more importance than technical expertise. Despite this, tribe members will cast their ballots for the factions they are affiliated with, rather than their families.”

Hamas' representative to the Central Elections Commission, Sami Abu Zuhri, told Al-Monitor, “Hamas will not take part in local elections through partisan lists in the Gaza Strip and the West Bank. Rather, it will support lists consisting of competent and professional candidates and some family figures. Hamas does not overlook family affiliations in local elections, provided that this factor does not overshadow the candidates’ competence, professionalism and political affiliation. This is because local elections concern local councils in each town, village or city. Family and tribal affiliations are strongly present, but should not be a major criterion in the formation of electoral lists.”

Iyad Qarnaz, Fatah’s representative in the Central Elections Commission, told Al-Monitor, “The tribal affiliations were taken into account during the formation of Fatah’s lists — as tribes consist of a key component of Palestinian society — but not at the expense of competency-related criteria. This is because competencies are important for the furthering of the citizens’ interests, and Fatah is striving to form an electoral list guaranteeing fair representation of all Palestinian social groups. On election day, Fatah members will be voting for those candidates selected by the movement, rather than candidates based on tribal affiliation, in a way that is satisfactory to the families and that serves the people’s interests at the same time.”

The Popular Front for the Liberation of Palestine’s representative in the Central Elections Commission, Osama al-Hage Ahmed, told Al-Monitor, “The PFLP is taking into account the candidates’ competence, integrity and history of national struggle, apart from any considerations related to the family. This is because the tribal factor is no longer a reference in Palestinian territories, especially in Gaza, which is dominated by political and factional considerations. The majority of the youths are affiliated with factions, and on election day, our members will be voting for lists representing a civilized civil society that has democratic tendencies, away from any tribal considerations.”

However, analysts of Palestinians' actual behavior suggest that tribal affiliations will trump politics.

Abdel Sattar Qassem, a professor of political science at An-Najah National University, Nablus, told Al-Monitor, “The remarkable presence of Palestinian tribes is clearly seen in Gaza City and Hebron. Although the tribes are a main source of backwardness in Palestinian society, on polling day, Palestinians will vote based on tribal rather than partisan affiliations. This makes sense in light of the Palestinian factions’ declining popularity and a lack of confidence in these factions. It means that clans and tribes will triumph over factions and parties in the upcoming local elections.”

Al-Monitor has learned from a source within a Palestinian faction that declined to be named that said faction had held discussions to select its candidates, but found itself up against the families' and tribes’ choices. Tribes and families have opposed candidates suggested by factions and promoted their own candidates despite their rejection by the parties’ leadership and popular base. Many electoral lists are thus being formed based on familial and tribal factors. In some cases a single family has placed multiple candidates in a single list, and in others, the same family nominated candidates in competing lists to guarantee a win.