Will next Palestinian president be handpicked by Abbas?

Many prominent names are coming up as potential successors to Palestinian President Mahmoud Abbas, who is expected to handpick the candidate himself. 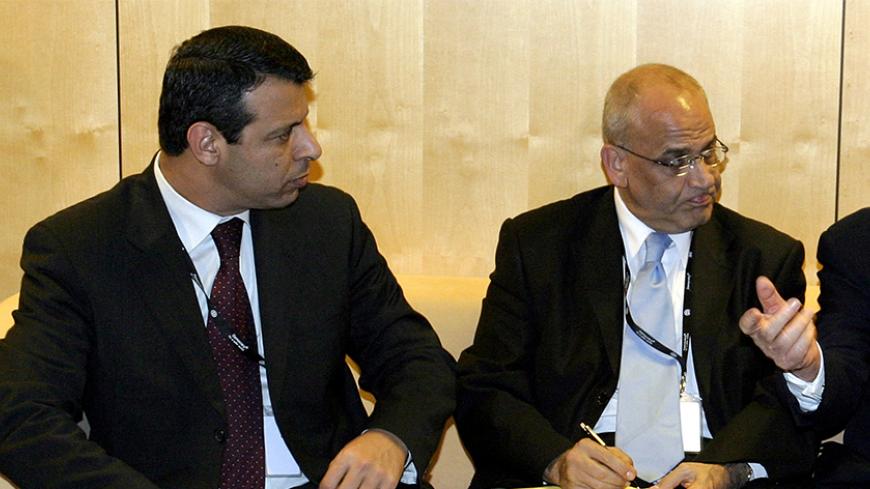 The holy month of Ramadan is an opportunity for people to gather in unison as they break their fast. This year, the key topic among Palestinians has been the issue of the Palestinian presidential succession.

The various post-Mahmoud Abbas scenarios have engulfed talks in almost every home or restaurant that Palestinians have gathered in. While the consensus among Palestinians is that the next Palestinian leader must have impeccable nationalist credentials, most agree that such an individual must also pass through some sort of vetting process by Arab countries and the international community.

While some well-known names, such as former Prime Minister Salam Fayyad, might come up for discussion, most accept that short of a free and fair general election of all Palestinians, this succession process will most certainly take place within the ruling Fatah movement. Within such a scenario, most people naturally expect to see Abbas’ successor come from one of the movement’s 20 Central Committee members.

For Palestinians living in the occupied territories today, part of the qualifications for leadership is often experiencing the tough conditions of living under occupation including paying the sacrifice of being in prison. This puts individuals such as Marwan Barghouti — who has been serving multi-lifetime terms in an Israel jail since 2002 — as the No. 1 candidate. But Barghouti’s imprisonment puts him at a disadvantage in terms of availability and even doubt whether he has the needed support from Arab countries and the United States.

The unwritten conditionality of having been born and suffered under occupation also removes former head of Palestinian intelligence Tawfiq Tirawi, who was among the Palestine Liberation Organization (PLO) leaders who came from abroad with late President Yasser Arafat after the 1993 Oslo process and is seen as one of the strongest members of the PLO group within Fatah’s Central Committee.

By this process of elimination, the two leading candidates from within Fatah’s leadership are head of the Palestinian Football Association Jibril Rajoub, who was the director of the Preventive Security apparatus in the West Bank, and former Gaza strongman Mohammad Dahlan, who headed the Preventive Security branch in the Gaza Strip.

Again, these two might have a strong following within the occupied territories, but they are too controversial in different ways: Both will have a hard time garnering internal, Arab and international support especially from Jordan, which is one of two Arab countries that has a peace treaty with Israel and is considered a major US ally.

A May 27 report in the London-based Middle East Eye suggests the two — especially Dahlan — might act as kingmakers and select an acceptable individual such as Fatah Central Committee member Naser al-Qudwa as their candidate for the Palestinian presidency. Qudwa, the former Palestinian foreign minister and former Palestinian UN representative, has high marks with the Arab League and the international community, after UN Secretary-General Ban Ki-moon and the Arab League had chosen him for sensitive missions as a peace envoy in Syria and Libya in 2015.

For his part, Qudwa has been trying to act as a future leader. He visited Gaza in February where he met with leaders of both Fatah and Hamas and gave an extensive interview to a leading online media outlet, Donia al-Watan. On June 11, he came up with a 10-point plan to bring Palestinians out of the current troubles. The plan talks about internal issues and presents a doable Palestinian strategy for the coming years.

Qudwa hinted in his Donia al-Watan interview that he is willing to accept a possible nomination for the Palestinian presidency.

Qudwa, who is presently in France, has not responded to repeated requests by Al-Monitor for an interview.

Most of the above scenarios require some kind of mechanism such as the convening of Fatah’s seventh conference, which was due to be held in 2015 and has been postponed indefinitely. The Fatah conference could signal who is next in line after Abbas or which is the strong camp within Fatah. Fatah leaders stated on Nov. 16, 2015, that the reason for the postponement was the restrictions by Hamas for Fatah leaders from Gaza to attend.

A faster mechanism for succession might take the same route as the one that brought Abbas himself to the leadership. At the time, Arafat handpicked Abbas as his successor and gave him the important positions of prime minister and deputy chairman of the PLO’s Executive Committee.

Palestinian sources within Fatah told Al-Monitor that there is now strong evidence that Abbas is planning to handpick a successor. Earlier efforts by Abbas to push intelligence chief Majid Faraj were not successful, as the non-English speaking Palestinian who spent years in Israeli prisons has not succeeded in getting a positive media profile. His only interview with the foreign press on Jan. 18 proved disastrous internally; he was attacked for his recklessness in describing how the Palestinian security forces search Palestinian schoolchildren’s backpacks for knives.

Al-Monitor learned from a senior official in Fatah that a more serious effort by Abbas has been focused on chief Palestinian negotiator Saeb Erekat, a well-known figure in Arab and international circles and in the media. The source, who asked to remain anonymous, said that in addition to becoming the secretary-general to the PLO in place of ousted Yasser Abed Rabbo in July 2015, Erekat has been secretly given new responsibilities by Abbas, including influential control over the coveted Amman-based Palestine National Fund, which has since 2005 been headed by former Arafat confidant Ramzi Khoury.

To help enact such a possibility for succession, Abbas created and appointed on April 4 a constitutional court, which is expected to legitimize any succession issue including the possibility of Abbas appointing a vice president who would take over immediately in case of Abbas’ departure. The path seems controversial but could succeed if enough votes can be secured in Fatah’s Central Committee.

The Palestinian Basic Law stipulates that the speaker of the Palestinian Legislative Council (PLC) takes over the presidency for 60 days following the absence (due to death or resignation) of a sitting president. The PLC has not convened since 2007, and the last speaker — Azziz Dweik — is a supporter of Hamas, which means that if implemented, the interim Palestinian president could be from the Hamas leadership. A constitutional court could legitimize a possible vice presidency or can rule that the secretary-general of the PLO’s Executive Committee — which has superiority over the Palestinian Authority — will take over during such a 60-day transitional period.

The issue of Palestinian succession, while consuming Palestinians, will need to be resolved soon. No major decision has been taken of late because of the joking and internal discussions about succession. The sooner that this issue is resolved, the sooner Palestinians can refocus on the more important issues of unity and liberation.