Hopes that Saeb Erekat, the head of the Palestinian negotiating team, would succeed President Mahmoud Abbas have been dashed by news that Erekat has to undergo an urgent lung transplant, thus further complicating the Palestinian political scene. 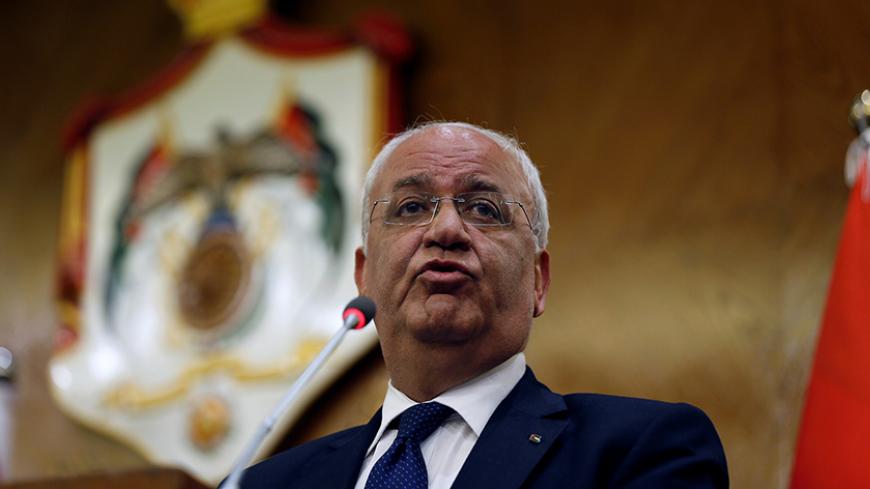 The case of the succession of Palestinian President Mahmoud Abbas has just gotten more complicated with news that PLO Secretary-General Saeb Erekat will undergo risky lung surgery this month. Palestinian officials had made a number of changes, including the creation of a constitutional court in April 2016, to ensure that Erekat would be interim president if Abbas is unable to continue his presidential duties. It is expected that the constitutional court would rule in favor of the PLO’s secretary-general, rather than the speaker of the parliament, to act as interim president in the 60 days leading up to new elections.

Multiple Palestinian sources and Israeli media have confirmed that the PLO's secretary-general and the head of the Palestinian negotiating team will have a lung transplant later this month.

A senior member of the Fatah Central Committee told Al-Monitor that while Erekat has been taking drugs for his lung ailment for nearly 10 years, the situation has recently deteriorated to the point that a transplant is required. “His ability to work well has been affected and his lungs are now operating at 35% capacity,” the Fatah official said on condition of anonymity due the personal and sensitive nature of the case.

A report published on the i24news site claimed that Erekat is likely to travel to the United States for surgery, although a senior Fatah source told Al-Monitor on condition of anonymity that if the right donor is found he might undergo surgery in the region.

Abbas’ most prominent known replacements are unlikely to reach the presidential headquarters. Public opinion polls show Marwan Barghouti — currently serving multiple life sentences in Israeli prison — as the most popular Palestinian to replace Abbas. According to a poll published July 5 by the Ramallah-based Palestine Center for Policy and Survey Research, if elections were held at this time, Barghouti would receive 41% of the vote and Abbas 22%.

Former Fatah leader Mohammed Dahlan — pushed for by the Arab quartet (Jordan, Egypt, Saudi Arabia and the United Arab Emirates) — was rejected by the ruling Fatah movement during its seventh congress held in Ramallah in November 2016.

In the absence of any clear replacement candidate, most of the current attention has now shifted to the mechanism of the transition.

The Palestinian Basic Law states in Article 37 subsection 2 that the speaker of the Palestinian Legislative Council (PLC) will assume the role of president for 60 days if the presidential office is vacant. Multiple Palestinian officials close to the president have argued that a new mechanism must be introduced since the PLC has not been in session for seven years. They also suggested that one way to overcome this problem would be to create the position of vice president.

The argument is that, currently, there is no speaker of the PLC. The last speaker after the Hamas 2007 victory in the parliamentary elections was Abdel Aziz Dweik. While he served for about a year, the PLC has been dormant ever since the split between the Gaza Strip and the West Bank. With the PLC not in session and with the speaker having to be elected anew every session, the position of PLC speaker has been vacant.

Instead, supporters of Abbas call for reverting to the PLO, which had signed the Oslo Accord in 1993 and had approved the setting up of the Palestinian National Authority. In this case, the secretary-general of the PLO could become the interim president. To boost this argument, Abbas set up a constitutional court in April 2016 in the hope that it would agree to this argument if and when such a constitutional decision is needed. The court would only look into the issue once a decision is made as to who will be acting president and only if that decision was contested. The ailment of Erekat complicates this situation.

In addition to his position within the PLO, Erekat holds the important portfolio as the head of the Palestinian negotiating team. The PLO’s negotiating department has been working for years under Erekat’s leadership to prepare for peace talks.

Multiple senior Palestinian officials interviewed for this article agreed that the only person who currently could step in the shoes of Erekat in terms of the negotiations is Maj. Gen. Majid Faraj, the head of the Palestinian intelligence. Because of the sensitivity of the issue, no one agreed to be quoted on the record.

The Palestinian officials contacted by Al-Monitor argued that since Faraj has been present at all meetings taking place in Palestine and Washington, he carries with him the institutional memory that is needed for successful negotiations and in order not to loose on issues that might have been agreed to in past talks.

According to sources close to Abbas, Faraj is also Abbas’ handpicked leader to succeed him. Faraj was born in the Palestinian refugee camp of Dheisheh near Bethlehem and spent years in Israeli prisons. He is generally well-liked by Palestinians but lacks the needed experience to become the next president.

For Fatah, it has been customary that their representative in the PLO’s Executive Committee should come from the Fatah Central Committee. Faraj is not a member of that prestigious committee either.

Speaking to Al-Monitor, Zaki recalled that Ahmed Qurei (Abu Ala), a former Palestinian prime minister and head of the Oslo negotiating team, was appointed to the PLO’s Executive Committee in 2006, even though he had failed to be elected to the Fatah Central Committee.

The legal and political succession issues could be solved if there is a Fatah-Hamas agreement that would usher in legislative and presidential elections. Abbas and his team expected Hamas to surrender to this issue after the Ramallah government stopped subsidizing the electricity costs to the Gaza Strip. But a recent Hamas-Egyptian agreement and the rapprochement between Hamas and their archrival renegade Fatah leader Dahlan have dashed the hopes many had of reconciliation and elections.

Erekat’s ailment has again refocused attention on the difficult Palestinian political landscape. Although he appears to be in good shape, Abbas is in his early 80s and will need to pass the baton to a younger, more energetic leader. It is still unclear whether he will maneuver things so that the head of his intelligence service, Faraj, will be in line for his position or whether it will be a free fall.