How Abbas could end up with three successors

As Fatah’s seventh congress draws near, there is talk of distributing the top three positions within the movement, all currently held by President Mahmoud Abbas, to different individuals. 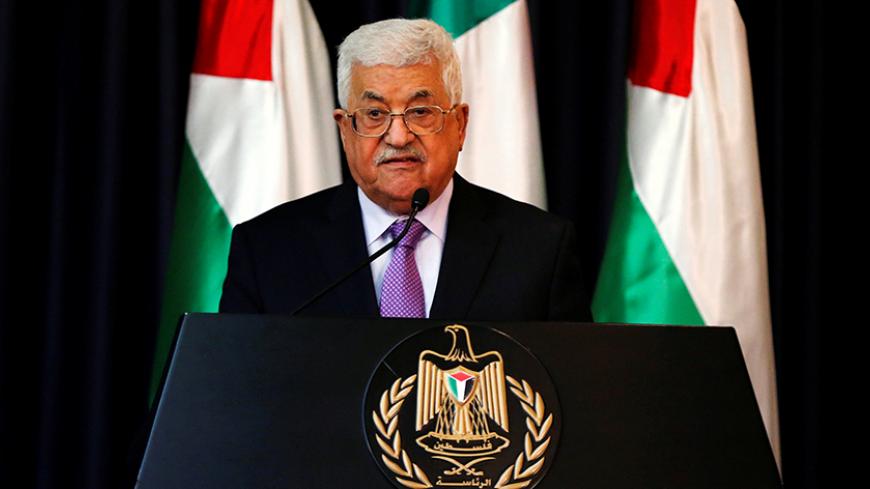 With last-minute preparations underway for the seventh Fatah congress due to be held Nov. 29, the big question on many people’s minds is whether the top three positions presently held by Mahmoud Abbas will be taken up by a single person or three different people.

At present, Abbas is not only the Palestinian president and the head of the Fatah movement, but he is also the chairman of the Palestine Liberation Organization’s Executive Committee. Traditionally, the PLO position is considered the most important one, as the organization represents all Palestinians and is the highest Palestinian political body. But Palestinian analysts say that the PLO has become an empty shell with few financial resources.

A senior Palestinian source privy to discussions within the ruling Fatah movement told Al-Monitor that there are no plans at present to distribute the positions held by Abbas. The source, who asked to remain anonymous due to the sensitivity of the issue, said that the focus of the seventh Fatah congress is to rejuvenate the movement and to bring in new blood, while at the same time putting an end to what he called the Dahlan movement.

Renegade Fatah leader Mohammed Dahlan, who was expelled from the Fatah movement in 2011, is trying to return to its fold with the help of a number of Arab countries, among them Egypt and the United Arab Emirates.

Majed Arruri, executive director of the Palestinian rule-of-law organization Istiqlal, told Al-Monitor that while the idea of splitting the three positions among three different individuals is a good one, such a step will need a lot of planning. “At present, the responsibilities for these three positions are overlapping and lack any written direction as to the limitations of power of each position,” he noted.

Arruri said that if there is not proper planning and definition of the powers of each position, there will be chaos.

Mohammed Daraghmeh, a leading Palestinian analyst with many years of experience covering the Palestinian government for the Associated Press, told Al-Monitor that the idea has merit but would be difficult to implement. “Splitting up the responsibilities increases the sense of partnership, diversity and plurality in Palestinian political life. It will give the political leadership much wider opportunities to maneuver and to avoid the political and financial pressures that a single leader would face,” he said.

While legally and technically the Palestinian Authority (PA) is subordinate to the PLO, the changes on the ground during the past two decades, including the establishment of the Palestinian government, have caused a power reversal. Daraghmeh said that the positions within Fatah and the PLO have eroded while the PA presidency has become much more powerful. The president has money, contacts with world leaders and administrative resources that neither Fatah nor the PLO has ever had.

Daraghmeh said that the money and power connected to the Palestinian presidency have dwarfed the other two positions. “Because all the money is in the PA, both the position of the leader of Fatah and the chairman of the PLO have become obsolete. The only way that these other positions can become important is if they are able to find independent financial resources,” Daraghmeh explained.

Kayyed Miari, the executive director of Witness Center, a nongovernmental organization based in Nablus and committed to freedom and equality, also said he was skeptical about the likely success of splitting up the positions. He told Al-Monitor, “The idea has been discussed before, but for this idea to work, the leaders must be in harmony with each other and this is not so now.”

One of the reasons the idea of distributing the positions is very attractive is that it can resolve a leadership crisis in which the most popular leader, Marwan Barghouti, is in an Israeli jail serving five life sentences and other leaders lack the presence and the respect that the founding leaders had. Appointing Barghouti to one of these positions could eventually help secure his release and allow for a new locally based leadership to take over.

Different Arab leaders also appear to be suggesting individuals that they are close to for the top leadership positions. According to an Oct. 7 Israeli Channel 2 TV report, four Arab countries are pushing for the nomination of Nasser al-Qudwa, the former Palestinian representative to the UN in New York and a nephew of late Yasser Arafat, as the next Palestinian president.

Dahlan himself told the Palestinian news agency Maan Oct. 30 that he is not seeking nomination for the presidency, nor does he aspire to that position.

As the curtains begin to close on the presidency of 81-year-old Abbas, the question of succession is receiving attention both publicly and in Arab and world capitals. This interest is now heightened with the approach of Fatah’s seventh congress, which has traditionally been the venue where activists in Palestine’s leading movement compete for the 100-plus seats of the Revolutionary Council, the 20 seats of the ruling Central Committee and the top position as leader of Fatah, the leading Palestinian liberation movement.

Some of the top leaders that will vie for Abbas’ top three positions include imprisoned leader Barghouti, head of the Palestinian Football Association Jibril Rajoub, head of the Palestinian intelligence service Majid Faraj, Secretary-General of the PLO Saeb Erekat and former UN representative Qudwa. And although Abbas has vowed not to run in the presidential election, he has never ruled out heading Fatah.

There are also rumors that Hamas’ Khaled Meshaal, who is not running for Hamas' top spot, might be awarded a senior position in the Palestinian National Council as part of a major reconciliation deal. Hamas is expected to hold secret elections to be concluded before the end of 2016.

While the elections for Fatah’s Central Committee will be revealing in many ways, there is no doubt that the succession process is marked by the need for a short-term solution that will avoid a collapse of leadership structure. The lack of a clear successor has opened the door for the possibility that a collective leadership of sorts could be the best solution to fill Abbas’ shoes until the dust settles.

In order for such cooperation to succeed and disaster to be avoided, there must be harmony between the leaders. The Palestinian public will be watching closely to see if any potential collective leadership is genuinely committed to work together for the common Palestinian good.