How Palestinian divisions affect the intifada

As the uprising in the Palestinian territories enters its second month, Palestinians have yet to agree on its nature, objectives and repercussions. 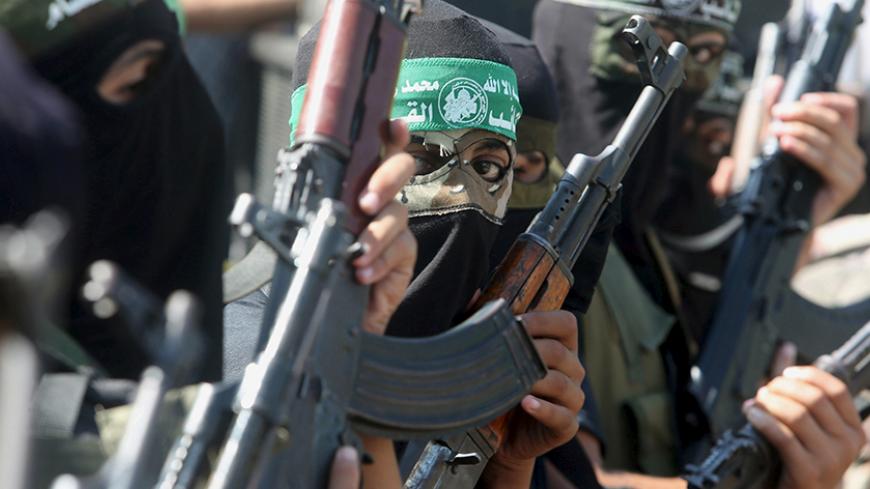 The Palestinian political scene has yet to agree on the nature of the confrontations taking place with the Israelis since early October. Some observers define them as an intifada, while others call them a "peaceful" popular uprising and a third group believes they are protests against Israel’s incursions of Al-Aqsa Mosque.

The majority of Palestinian forces and organizations, such as Hamas, Fatah, Islamic Jihad, the Popular Front for the Liberation of Palestine (PFLP) and the Democratic Front for the Liberation of Palestine, see the need to continue this intifada until it achieves its objectives — which Palestinians have yet to agree on. The choices include putting an end to Israel's restrictive policies regarding Al-Aqsa Mosque, Israel returning to negotiations with the Palestinian Authority (PA) and Israel stopping settlement activities in the West Bank.

Jamal Muheisen, a member of the Fatah Central Committee, told Al-Monitor, “Fatah supports the popular uprising in the Palestinian territories without the use of arms, because their use might make the public reluctant to participate. But the movement does not guarantee any reactions that may occur outside the scope of the PA, due to the Israeli crimes.”

Mahmoud al-Zahar, a member of Hamas’ political bureau, said Oct. 20, “What is happening in Jerusalem and the West Bank is an intifada in every sense of the word. The Zionist project lost to young men carrying stones, bottles and knives. Those calling for the nonmilitarization of the intifada only fear for their personal interests.”

The two previous statements reveal the conflict between Fatah and Hamas in terms of defining the intifada, its repercussions and the means used. Fatah wants a peaceful popular uprising, while Hamas calls for militarization and taking up arms. This is not a conflict over the formal methods, but rather over the intifada’s content and essence.

The conflict among Palestinians is not only limited to characterizing the intifada. On Nov. 2, Hamas announced that in the month of October, the PA arrested 103 Hamas members in the cities of Hebron, Tulkarm, Ramallah, Jenin, Bethlehem, Qalqilya, Nablus, Salfit and Tubas in the West Bank.

At the height of Palestinian confrontations with the Israelis, the PA does not seem to want to break the rules of the game with Israel, and the PA may see in this popular uprising an opportunity to resume negotiations with Israel instead of liberating the occupied territories. There is a fundamental difference between the two goals, which will be followed by a division over what means should be used against the Israelis.

Jamil Mezher, a member of the PFLP political bureau, told Al-Monitor, “The intifada has achieved direct and quick accomplishments, which led to limiting the occupation’s violations of Al-Aqsa Mosque and represented a deterrent to the settlers. However, the political foundation to protect the intifada requires a detachment from the Oslo Accord and its security and economic obligations.”

On Oct. 29, Mohammed al-Hindi, a member of the Islamic Jihad’s political bureau, called on the PA to not compromise on the intifada by entering into negotiations with Israel, adding that the factions need to review their policies away from political opportunism.

A quick look over the stances taken by the Palestinian factions reveals the intifada’s weak points. The Palestinian division since Hamas took over Gaza in 2007 could be the main threat for the intifada. However, the differences among Palestinians are not limited to the factions. In recent days, many well-known Palestinian authors called for not rushing into the intifada before agreeing on its objectives.

Hani al-Masri, head of the Palestinian Center for Policy Research & Strategic Studies — Masarat, published an article Oct. 27 on what he considers a Palestinian debate over a peaceful or militarized intifada, and whether the goal is to activate the peace process or end the occupation.

Mohammed Daraghmeh, a Palestinian journalist, also wrote an article Oct. 17 stirring a fuss among Palestinians. His call for an end to attacks against Israelis prompted mixed reactions.

“The intifada does not have a popular organization or a leadership that organizes, directs it and determines its effectiveness,” Daraghmeh told Al-Monitor. “The Palestinians are not going through with an intifada like the previous ones. They have no hopes of expelling the occupation, and there are no organized parties able to lead the intifada. Hamas wishes to take the lead, but it is drained, while Fatah is capable but unwilling to do so.”

Many Palestinians are convinced that the political situation will not help the intifada succeed, which is why not all of them are involved in its events. These activities are limited to a few West Bank cities such as Ramallah, al-Bireh and Hebron, but they are absent from large cities such as Nablus and Jenin, despite Hamas’ effort to involve more Palestinians in the intifada through increased media coverage.

Hussam Khader, member of the Fatah Revolutionary Council, was bold enough to call on Palestinians to not participate in a third intifada, as Palestinians are not ready to bear the consequences, given their current dire situation. He made the call Oct. 4 on his Facebook page.

The intifada in the West Bank led to research and intellectual activities in Gaza, where a number of seminars and panels were held to discuss the intifada's future. Al-Monitor attended a seminar held Oct. 31 by the Center for Political and Development Studies in Gaza about the intifada’s prospects and challenges.

Ghazi Hamad, a pragmatic figure in Hamas and undersecretary of the Foreign Ministry in Gaza, told Al-Monitor, “There are serious challenges facing the Palestinians in terms of whether they have the political ability to turn the sacrifices made during the intifada into concrete achievements, or whether they will just limit the number of martyrs and monitor the armed attacks against Israelis. What will they do should the intifada last for a long time? Will they manage it with the same means used in previous intifadas or will they let it take its course without objectives?”

These differences among Palestinians may not be the same that were witnessed in the first intifada in 1987 and the second intifada in 2000. This intifada is taking place amid a sharp political and geographical division, which casts a shadow over each faction’s concerns regarding the other's aspirations. This is why allowing it to take its course without a field plan or an agreed-upon political program predicts the outcome.