Lessons from the second intifada: Will they be used in a third?

The West Bank is witnessing events that could lead to a new uprising, using new methods. 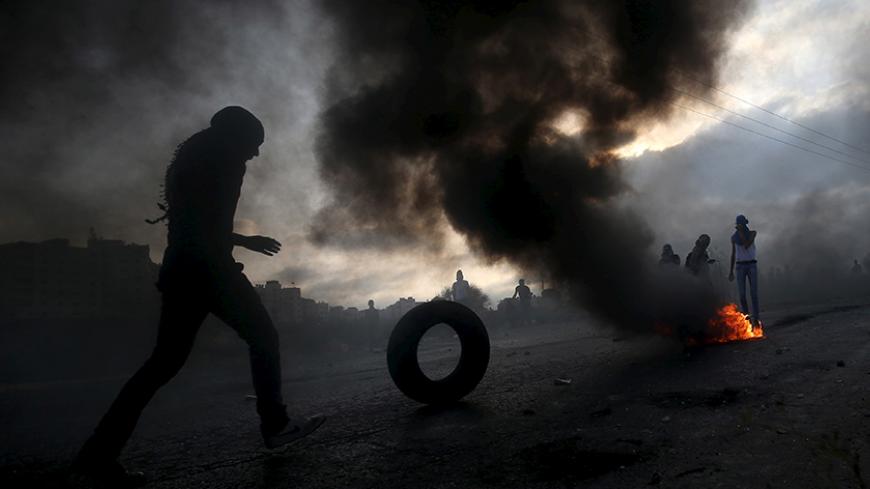 A Palestinian rolls a tire to be burned during clashes with the Israeli army near the Jewish settlement of Beit El, near the occupied West Bank city of Ramallah, Oct. 5, 2015. - REUTERS/Mohamad Torokman

RAMALLAH, West Bank — As Palestinians observe the 15th anniversary of the second intifada, a third intifada appears to be brewing in the West Bank, one that would require new strategies.

An atmosphere recalling the Al-Aqsa intifada (2000-2005) has prevailed in the West Bank since earlier in October, when the Israeli army sent hundreds of troops into Palestinian towns and closed military checkpoints, while settlers also attacked Palestinian villages.

These incidents followed the death of two settlers — an Israeli intelligence officer and his wife — in an Oct. 1 shooting near the settlement of Itamar, near Nablus in the West Bank. Another two settlers were stabbed and shot to death Oct. 3 in Jerusalem, while the Palestinian perpetrator, Muhannad Halabi from al-Bireh, was killed. Officials said Halabi apparently killed the settlers as a response to settlers raiding Al-Aqsa Mosque.

Later, clashes across the West Bank broke out between Palestinians and Israeli forces and settlers. The Oct. 3 clashes led to the death of young Fadi Aloun in Issawiya, who was shot by settlers who claimed Aloun tried to stab one of them, although witnesses denied the settlers’ story.

The killing of the officer and his wife near Itamar recalls the second intifada, which erupted Sept. 28, 2000. Palestinians commemorated that intifada's 15th anniversary Oct. 1 in the 1948 territories, where they placed wreaths on victims’ graves. In the West Bank on Oct. 2, popular marches to commemorate the intifada turned into confrontations with Israeli forces.

The West Bank today appears on the brink of a third intifada. However, field indicators portend that an uprising would be through means different than ones used in previous intifadas, which had a military nature and during which Israel reoccupied the West Bank and assassinated Palestinian political and military leaders.

For 15 years, the Palestinians have been discussing and analyzing the second intifada to assess its achievements and failures, especially with the transition from popular resistance to armed resistance. Previously, intifadas mainly consisted of suicide attacks inside the 1948 territories and shootings against settlers on bypass roads in the West Bank. Would changes that have taken place in the Palestinian and regional arena prevent those same means from being used today? Khaled Oudat Ullah, a social sciences researcher, ruled out the possibility.

“The Palestinian Authority [PA] dismantled the [Palestinian] society and systematically destroyed the resistance structure within it. So it is difficult to talk about the possibility of having a third intifada with the same means," he said in an interview with Al-Monitor.

“The Palestinian society has the power to create new means of struggle different than those used in the second intifada. Those previous means have consumed the people’s energy. Today, [Palestinians] are not required to enter into an open confrontation with Israel, one whose outcomes cannot be predicted,” Oudat Ullah said. “Palestinian society should not remain a prisoner of previous intifadas or reuse the same means. This is why Palestinian forces are required to create new means.”

There are many reasons why a new uprising would not use old methods: the PA’s strong attachment to agreements signed with Israel, the dismantling of the Palestinian factions’ armed cells, President Mahmoud Abbas’ rejection of an armed uprising under his reign and the continuation of security coordination with Israel, in addition to internal division.

The killing of settlers in Nablus came just hours after Abbas’ speech Sept. 30 at the United Nations in which he said, “We therefore declare that we cannot continue to be bound by these agreements and that Israel must assume all of its responsibilities as an occupying power.”

However, Abbas’ speech was not interpreted to mean that “no decision was made to halt security coordination with Israel,” a Palestinian source told Al-Monitor on condition of anonymity. Israel's Channel Ten noted on Oct. 2, “The PA has enhanced security coordination after the Itamar incident.”

Despite this, observers say there is significant mobilization in the West Bank for a struggle with various means and in different forms. They pointed to the more than 160 cases of confrontation and clashes between Palestinians and the occupation that take place each week, in addition to the continuous individual operations.

Writer and political analyst Ahmad Rafiq Awad told Al-Monitor, “The means used in the second intifada cannot be used in any future uprising,” but the people are innovative in creating new means.

“We need a low-scale intifada that would not paralyze social life, but keep the occupation and settlers in a state of tension and insecurity, while clashes should be distributed in all regions,” he added.

“Militarizing the intifada is wrong. By doing so, we would be giving Israel a pretext to push the situation into further violence and escalation, and thus [justifying] its killings before the world, especially since the region and the world do not care about us and do not condemn Israel for its crimes,” Awad said.

Jamil Mezher, a member of the Popular Front for the Liberation of Palestine's political bureau, told Al-Monitor, “The form and means used in an intifada are determined by a unified national leadership able to lead a popular uprising.”

“The incidents occurring in the West Bank and Jerusalem show clear signs of a possible popular uprising that would include all means and forms of struggle. It would start with demonstrations and clashes against the occupation at checkpoints, boycotting Israel, resorting to international courts and finally [launching] an armed struggle. And should it be formed, the unified leadership [will decide] which means to use,” Mezher added.

Abbas Zaki, a member of Fatah’s Central Committee, told Al-Monitor that the Palestinian people reject slavery and continuation of the occupation, so it is difficult to determine the means or features of the next stage, which will require research, awareness and agreement among Palestinians.

“Palestine’s situation has changed today compared to how it was during the outbreak of the Al-Aqsa intifada. It is now a nonmember observer state at the UN and has signed dozens of international treaties and conventions. This is why we are in the process of implementing the ideas proposed by President Abbas at the UN to make Israel assume its responsibility as an occupying power,” Zaki said.

International law and divine laws give an occupied people the right to defend themselves using all tools and means, including armed resistance, Hamas leader Hassan Yousef told Al-Monitor. He believes Palestinians have the right and ability to use these means.

However, Yousef pointed to obstacles to the use of armed resistance in the West Bank, represented by the PA, noting that the situation on the ground should be taken into account before using these means.

The success of a new intifada would require putting an end to internal division and forming a unified national leadership that includes all political forces. However, a lack of those conditions would not preclude an expansion of confrontations with Israeli forces from turning into a popular intifada.