Is third intifada on its way to becoming history?

What has been described as a third intifada now seems to be declining as Palestinian attacks decrease, though Hamas insists otherwise. 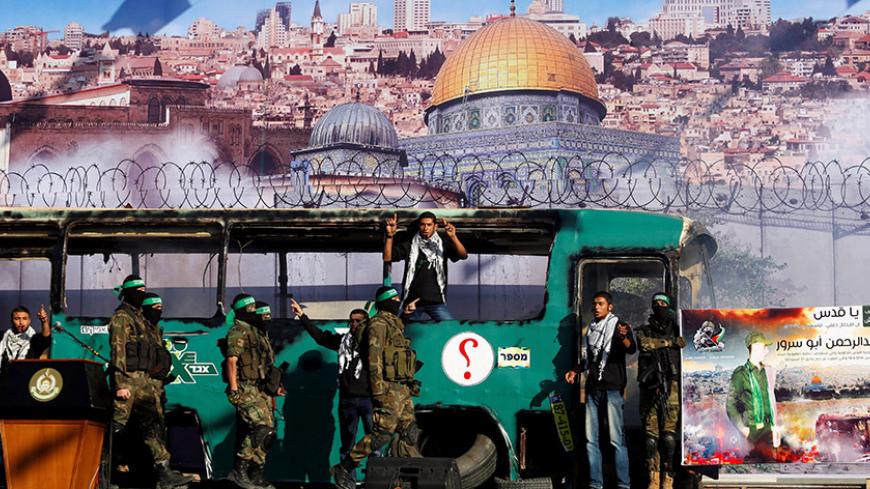 Palestinians now go days between hearing about an armed attack against Israelis. During the first two months of the current unrest, multiple attacks took place every day.

The Shin Bet's latest assessments, as reported by Israeli Channel 10 on May 3, indicate a decline in Palestinian attacks in April. Since October, 282 attacks have been reported, including 166 stabbings, 82 shootings and 29 vehicular incidents as well as stone-throwing attacks. April only saw 16 attacks against Israelis, including one stabbing, two shootings and 13 bombings.

On May 10, two Israelis were stabbed while three others were wounded in an explosion in Jerusalem.

Samira Halayka, a Hamas representative at the Palestinian Legislative Council in Hebron, disagreed, telling Al-Monitor, “The intifada has not been receding, as stabbing incidents have not stopped recently. It seems as though the Palestinian factions wield little influence on the intifada compared to the first one in 1987 and the second in 2000. Moreover, Israeli media coverage of the intifada events has been gradually declining since its outbreak, after Israel shut down several Palestinian media outlets in the past few months while the Palestinian Authority warned against covering news of operations and armed attacks. This is not to mention the Israeli and PA crackdown on the intifada youth through political arrests. All of these factors have contributed to what experts perceived as the decline of the intifada on the ground, which is not the case.”

It could also be argued that the security coordination between the PA and Israel has been an important factor of the possible decline. On May 5, Shin Bet chief Yoram Cohen said that the PA security services have been thwarting attacks soon after receiving intelligence from Israel, praising the security coordination’s role in the efforts. Cohen added that on occasion, the PA fails to take action against militants, and this is where Israeli forces come in, but the PA often takes the lead in crowded Palestinian areas, as it is harder for Israel to intervene there.

On May 4, Haaretz reported that since the outbreak of the violence, the Israel Defense Forces and the PA security services have collaborated to arrest Palestinians suspected of planning or taking part in attacks against Israeli targets, with the PA responsible for 40% of all arrests in the West Bank.

Amin Maqboul, the secretary-general of Fatah's Revolutionary Council, told Al-Monitor, “Fatah has not used the term 'intifada' to refer to the recent attacks in the Palestinian territories. The party considers these attacks part of a popular uprising that constantly peaks and declines, which is typical of any popular movement.”

Maqboul said, “This popular uprising came as an angry response to the firebombing by Israeli settlers against the Dawabsha family's home in the West Bank in July 2015, as well as the ongoing Israeli desecration of Al-Aqsa Mosque. The PA was supportive of the popular aspect of the Palestinian reaction and even called for its continuation. The security coordination is irrelevant to the decline or receding of the uprising.”

It is worth noting that on April 19, Palestinian President Mahmoud Abbas condemned the attacks perpetrated by Palestinian youths against Israeli forces and settlers in the West Bank and Jerusalem. Abbas’ statement met an angry response from Hamas, which accused him of undermining the intifada by coordinating with Israel.

Some Palestinians may argue that the uprising has had no effect on the Israeli public, which remained indifferent to their legitimate calls for independence and the establishment of a state. However, there have been popular Israeli demands that the government take more oppressive actions against Palestinians. The attacks have failed to elicit a positive response from the international community, and the Palestinian media has quieted its incitement.

Nine months into the unrest, Palestinians failed to reach a consensus regarding its nature, ultimate goals and means. As a result, demonstrations were in complete disarray with only dozens or at most hundreds of participants, while tens of thousands took to the streets during the previous two intifadas, indicating that Palestinians are now at odds with the current wave of attacks.

In an interview with Al-Monitor, Khalil Shaheen, the head of the Palestinian Center for Policy Research and Strategic Studies in Ramallah, said, “The decline was expected since the outbreak of the intifada. Some Palestinians rushed into calling it a third intifada because what is happening is a wave of popular uprising, which may evolve or stumble eventually. It may even take a different direction even if it receded at some point. We are now witnessing a Palestinian generation that wishes to resume the Israeli-Palestinian conflict and deal with Israel as a colonial power, adopting a defiant stance against it.”

Shaheen said, “As for the current decline of the intifada, it is due to the absence of an official leadership or organization, as well as of a political agenda. Add to that the waning influence of Palestinian factions, and you have a gap between the Palestinian public and the official stance of these factions.”

Amid what seems to be the receding of the uprising, Hamas is forging ahead with a plan to inflame the West Bank against Israel to the point of bombings and kidnapping of Israeli soldiers, as revealed by the Shin Bet in February. Such actions would necessarily entail another Defensive Shield-type operation, like the one conducted in 2002 in similar circumstances of Palestinian attacks in the West Bank. Such a development could work to the detriment of the PA, which would prompt further efforts on its part to thwart Palestinian attacks against Israelis for fear that Hamas will benefit from them. For the PA, this a red line that shall not be crossed, even if that takes the crushing of the uprising to prevent it.