One year into Palestinian uprising: What’s the status today?

The popular uprising in the West Bank has significantly waned, but not disappeared, in recent months in the absence of organized political support. 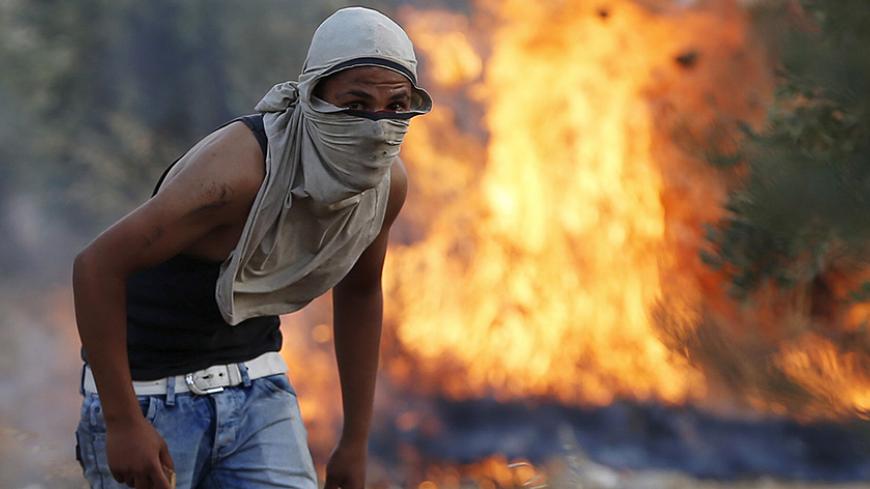 A Palestinian stone thrower looks on as he stands in front of a fire during clashes with Israeli troops following the funeral of Riham Dawabsha at Douma village, near the occupied West Bank city of Nablus, Sept. 7, 2015. Dawabsha died following an arson attack on her home that also killed her husband and one of their two sons. - REUTERS/Ammar Awad

RAMALLAH, West Bank — The Palestinian uprising in the West Bank that began in July 2015 has receded, but because the underlying causes still exist and resentment still smolders, observers say the violence could reignite at any time.

It has been a year since the popular uprising erupted after Israeli settlers were blamed for a July 31 arson attack that killed three of the four members of the Dawabsha family, including an 18-month-old boy, and severely wounded the boy's older brother. Clashes broke out in various parts of the West Bank between Palestinians and Israeli army forces and settlers, continuing for months. The Israeli army deployed hundreds of troops in Palestinian towns and villages.

Some aspects of the popular uprising — such as confrontations at military checkpoints and contact areas — have faded today. The number of individual attacks (stabbings and running people over with cars) carried out against settlers and Israeli soldiers has dropped.

According to statistics published annually by the Shin Bet, the Israeli internal security service, 609 attacks were carried out in October 2015 (including throwing of stones and Molotov cocktails), compared with 155 in March 2016. The monthly figure has continued to fall, to 101 attacks in May 2016 and 103 in June, the Shin Bet reported in additional data on its website. The number of Palestinians killed also has decreased, as 145 deaths were registered in just the last three months of 2015, compared with 92 this year through June.

He said, “Both the leaders and factions were afraid of the popular uprising and decided not to pay close attention to it or provide it with the required support. This led to its regression amid an Israeli oppression exemplified by a vast wave of arrests, daily raids and field executions.”

Yet conditions that contributed to the uprising remain, "notably young people's frustration with the political process and the occupation’s ongoing violations, including the building of settlements, confiscation of lands and field executions,” Mansour said.

“Just like us, the Israelis are aware that the popular uprising, despite its regression, could explode at any moment with more momentum and strength."

Asked what the uprising’s waning could mean for Palestinians, Mansour said, “The Palestinian public is very frustrated due to the intifada’s failure to make any progress amid no political achievements, the continuation of the occupation and the daily aggression against them.”

A poll published by the Arab World for Research and Development on Jan. 9 showed that 90% of respondents believed protests around that time were not being organized by political forces, and 51% said they didn't believe protests would develop into a full-scale intifada. Meanwhile, 97% cited three main reasons for the outbreak of the protests: Israeli threats to holy places in Jerusalem, the expansion of settlements and the blockade.

The Palestinian Center for Policy Research and Strategic Studies (Masarat) issued a paper July 13 estimating that “the uprising in its current form and under the current circumstances cannot continue because uprisings must not remain spontaneous. Otherwise, they lose momentum and die regardless of the occupation’s repression. Uprisings tend to lose their compass in the absence of a 'political plan' that sets an organized framework.”

The popular uprising developed on an individual and unorganized basis away from any political leadership. While this made it difficult for Israel to arrest or assassinate any leaders — as was the case with the two previous intifadas, in 1987 and 2000 — it also meant the uprising "lacked any political vision," writer and political analyst Abdul Rahman al-Tamimi told Al-Monitor.

He said, "No Palestinian political parties or factions participated in it, and the Palestinian Authority [PA] wanted it to end for fear of its development and spinning out of control, and for its failure to reap any fruits a full year into its eruption. This caused frustration for the Palestinians.”

The popular uprising failed to resolve the political deadlock between the Palestinians and Israelis that had arisen when negotiations stopped in April 2014 due to Israel's refusal to release a fourth group of Palestinian prisoners detained before the Oslo Accord.

Tamimi shared his political interpretation of the current situation amid the popular uprising’s failure to develop and the political standstill. “I think that Israel is proceeding with its strategic plans, which consist of separating the Gaza Strip from the West Bank in order for Gaza to become a separate entity and for Israel to annex the Jordan Valley area to become fully Israeli, along with Jerusalem and the settlements.”

Asked about the fate of the PA, Tamimi said, “Israel and the international parties are not seeking to break down, but to weaken the PA. This will be done by activating the Israeli civil administration, which will exert pressure on the heads of Palestinian municipalities to force them to communicate with it by cutting services. This would turn the PA into an inactive entity.”

However, Samira al-Hulaiqa, a Hamas leader in the West Bank, told Al-Monitor the popular uprising has not gone away.

"But it has changed, and it is ongoing in the villages, towns and refugee camps that confront the break-ins of the army occupation on an almost daily basis at night,” Hulaiqa said. “According to our reading, the uprising shifted from confrontation on the points of contact and checkpoints to confrontation with the Israeli army in every region that it raids. This keeps citizens in direct contact with the occupation."

The popular uprising has indeed faded but is still alive and could erupt again for the simplest reason, as the conditions that led to it still exist. Yet still, it will be hard for it to develop into a massive and comprehensive upheaval due to the lack of organized support from faction leaders.