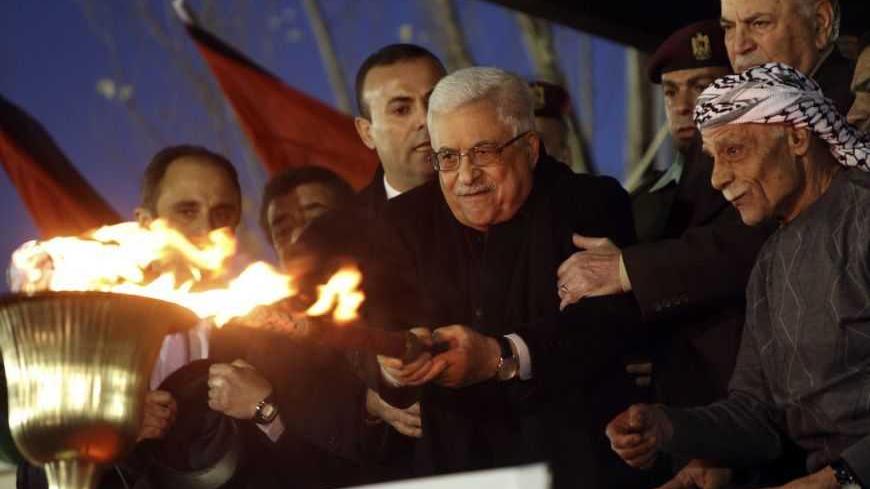 Palestinian President Mahmoud Abbas lights a torch during a rally marking the 48th anniversary of the founding of the Fatah movement in the West Bank city of Ramallah, Dec. 31, 2012. - REUTERS/Mohamad Torokman

By now it is impossible to ignore. Tires are burning. Rocks are being thrown. Tear gas is sprayed, and the term “intifada” is getting tossed around. Everywhere people are saying that the current wave of unrest in the region will lead to a third intifada. They have been saying it — and worrying about it — for months.

Clashed erupted again last weekend throughout the West Bank, just like they did the weekend before. Thousands of Palestinians took to the streets to express their solidarity with Palestinians prisoners on hunger strike in Israeli prisons. But what started as organized demonstrations on Friday [Feb. 22] after the prayer in the mosques, took upon a more significant meaning with the arrival of the news of the death of a Palestinian prisoner, Arafat Jaradat. Jaradat died at the Israeli prison of Megido. He was not a hunger striker, and the reasons for his death are now being investigated. But there is no doubt that this event contributed to further fuel the fire. Hundreds of Palestinians demonstrated by his village Sair near Hebron, and confronted Israeli soldiers. Hebron became a sensitive hotspot mainly due to the ongoing confrontations between the Jewish settlers living in the midst of the Palestinian population. Some of them are ready to employ any possible means to enrage their Palestinian neighbors. For example, at the traditional Purim carnival parade, one of the Jewish settlers disguised himself as a Palestinian prisoner, as if the issue is not but the most sensitive one, as far as Palestinians are concerned.

Another hot spot this weekend, probably the most sensitive of all, is the Temple Mount. This is where the Second Intifada erupted on that fateful Friday more than twelve years ago [September 2000], immediately after the [former Prime Minister] Ariel Sharon, in his role as head of the opposition, made his well-publicized visit to the site. Last Friday, Border Patrol forces burst into the Temple Mount compound to the sound of the muezzin’s call to prayer at the al-Aqsa Mosque. They were trying to stop a hail of stones pummeling Jewish worshippers at the Western Wall below.

There is no question that “the region is seething.” The fate of the hunger strikers in Israeli prisons is now the most volatile issue of all for the Palestinian people, regardless of their political affiliation. It is also the one issue that unites them. Palestinian prisoners are perceived as terrorists by large segments of the Israeli population, regardless of their political affiliations. What these people don’t realize, however, is that Palestinians view these prisoners very differently. As far as they are concerned, all these prisoners, without exception, benefit from having engaged in tadhiya, or “sacrifice.” In other words, they have sacrificed their lives on behalf of the Palestinian people’s struggle. They have abandoned their own, personal interests and volunteered to fight against the Israeli occupation. It is in the name of these prisoners that the people have taken to the street, though to be fair, there are plenty of other reasons that could motivate these thousands of Palestinian demonstrators to set the West Bank on fire. One need only consider the economic situation, staggering unemployment, clashes with settlers, and an assortment of local issues, such as the closure of Shuhada Street in Hebron.

The million-dollar question is: Are we facing a third intifada? It seems that the masses [of demonstrators] are not here yet, but they could accumulate easily over the next few weeks. And in such a case, if an Intifada does erupt, does that mean that Israel and the Palestinians are facing yet a third round of confrontation and violence, which will have an impact on the world at large?

To answer this question we must first reflect on the two previous intifadas.

We have already noted how the West Bank is in a state of unrest. The sense of frustration is huge, especially among the young, who suffer from a lack of jobs (unemployment has surpassed 20%), but also from a lack of hope. Desperation, frustration, and rage are clear precursors of an Intifada. They were the fuel that lit up the first Intifada in the Jabaliya refugee camp in December 1987, and in September 2000, those same precursors, centered on the Temple Mount, set the West Bank aflame too. As its name implies, the first intifada was a popular uprising. When it erupted, it not only surprised the Israeli leadership and former [late] Prime Minister Yitzhak Shamir, but also the local Palestinian leadership in the Occupied Territories and, even more so, [late Palestinian Chairman] Yasser Arafat and the PLO leadership overseas, in Tunis.

That first Intifada was sparked by a traffic accident, which occurred outside Kibbutz Yad Mordechai. When Palestinian laborers returning from work in Israel were run over by a truck, the rumor quickly spread throughout the Jabaliya refugee camp that they were killed intentionally. The rage of the masses, long seething beneath the surface, erupted all at once. But that Intifada would not have lasted five years, until the signing of the Oslo Accords, had Yasser Arafat and Fatah not been behind it. It was an enormous success. Without that Intifada, Arafat would never have been able to rehabilitate himself and win back his prestige in the Palestinian street after his defeat in Lebanon and his escape to Tunis. Without it, he would never have stood on the White House lawn next to President Bill Clinton, he would never have shook [late Prime Minister] Yitzhak Rabin’s cold, reluctant hand, and he would never have established the Palestinian Authority. All that came about because of that very Intifada.

The same thing happened in the second intifada. There was the Temple Mount, a light finger on the trigger, wounded, dead, and a snowball effect that no one could stop. Then too, Arafat exploited the events as they spun out of control, because he felt a need to show that he was the kind of leader who's in control of events, rather than being dragged along by them, as was really the case. That is why Arafat ordered the Tanzim [military branch of the Fatah], headed by Marwan Barghouti (who's also serving time in an Israeli prison) to seize control of events taking place in the street and to direct them. The rest, as they say, is history. This time, however, the consequences were far more lethal than they were during the first intifada. Thousands were left dead and tens of thousands more were wounded on both sides.

Is there anyone guiding events this time? Is anyone attempting to exploit the rage over the hunger strikers for their personal advantage? There can be no doubt that there is some guiding hand or other, as evidence by the fact that the demonstrations are taking place simultaneously in several pre-arranged sites across the West Bank. Meanwhile, Hamas and the Islamic Jihad movement are stirring up the territory and taking advantage of (the lack of) progress in the diplomatic process on the horizon. They are setting the West Bank on fire.

Nevertheless, there is still an enormous difference between what happened in the first two Intifadas and what is happening now. That difference is called Palestinian Chairman Abu Mazen.

Despite all the criticism, some of it justified, that is being leveled against him, the man standing at the helm of the Palestinian Authority today is someone who not only says, but does, everything in his power to ensure that the Palestinian struggle in the West Bank remains nonviolent and is unarmed. Abu Mazen and the Palestinian police are a calming factor in the field. They oversee every demonstration to make sure that they don’t spin out of control, and they receive instructions to maintain order directly from the [Palestinian headquarters] Mukata’a in Ramallah. They bear the brunt of the blows and follow the “spirit of the commander” committed to non-violence. This stands in sharp contrast to the two previous Intifadas, when the commander Abu Ammar, better known as Yasser Arafat, loudly mouthed his bellicose slogans to incite the territory, thereby bringing the Palestinian Authority to the pathetic, divided state that it finds itself in today. The difference now is that today there is also genuine cooperation between Israel and the Palestinian Authority in matters of security. What is most important of all, however, is the fact that both parties share a common interest that will not be another Intifada.

The stormy demonstrations that erupted across the West Bank over the past few weeks in response to the prisoners’ hunger strike could yet get much worse. This time, however, all the heads of the Palestinian Authority, including Fatah’s leadership will do everything they can to ensure that the demonstrations don’t spiral out of control.

After all, we’ve seen this film twice before.