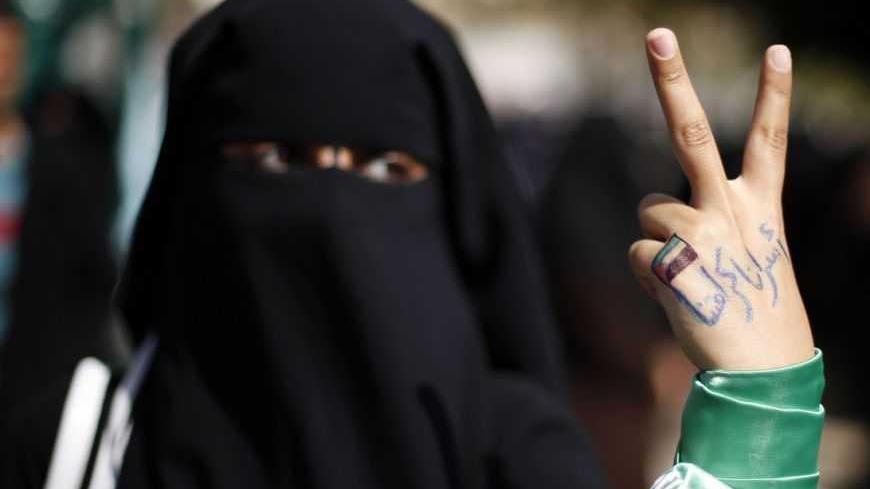 A Palestinian woman raises her hand written with the Arabic words "our prisoners are our dignity" as she takes part in a protest against the death of a Palestinian detainee in an Israeli jail, in Gaza City, Feb. 24, 2013. - REUTERS/Suhaib Salem

According to the blogosphere and media, a third intifada has been just around the corner for a few months now. However, as clashes raged through the West Bank between Palestinians and the Israeli army over the last two days that followed the death of Arafat Jaradat — a 30-year-old Palestinian man held in an Israeli jail — this rhetoric hit new heights. Protests and confrontations continued in the West Bank today, most notably in Jaradat’s hometown of Sa’ir, elsewhere in Hebron, Nablus, and outside of Ofer, the Israeli military prison on the outskirts of Ramallah, where demonstrations had already been taken place almost everyday for the past week in support of four Palestinian hunger strikers, including Samer Issawi.

Israeli news outlets — including Haaretz, The Jerusalem Post and Arutz Sheva — all wondered aloud whether these heightened tensions marked the beginnings of a third intifada, raising many questions: Were these reflections of fears brewing inside Israel, or did they constitute wishful thinking? In other words, would another intifada be beneficial to Israel at a time when it seems to have been losing many PR battles of late? Would an outbreak of hostilities provide Israel with a much-needed justification to the international community to warrant its ongoing military occupation?

Or is a third intifada exactly the last thing Israel wants at the moment? One can argue for this line of thinking when looking at repeated calls by Israeli officials, including Prime Minister Benjamin Netanyahu, for the Palestinian Authority (PA) to stop the demonstrations flooding the streets of the West Bank. In fact, Netanyahu’s envoy Itzhak Molho spoke to Palestinian officials and demanded them to “calm down” the protests. Israel also said it would release some of the tax monies it has been withholding since Palestinians upgraded their status at the UN. Netanyahu’s reasoning for the transfer—which some can interpret as bribery — is “so that [the PA] won’t have an excuse not to enforce calm on the ground.”

Coincidentally, just two days ago, Abbas told Al Arabiya TV, in a message that seems to have been aimed more at Israelis than the Palestinians, that he supported protests against the occupation, but stressed that these should be non-violent in nature. “Armed resistance is banned,” he said. “This is a law and it is forbidden. It is also forbidden in the Gaza Strip.” The reference to Gaza suggests that Abbas has a say over what goes on in the coastal enclave run by Hamas. And though there have been repeated attempts to reconcile Hamas with Abbas’ ruling party, Fatah, nothing fruitful has yet come of them - certainly not anything that would prompt Abbas to suggest that he can control what happens in the Gaza Strip. A telling indication of this is that following Jaradat’s death, Palestinian factions in Gaza held an urgent meeting to discuss a response to the man’s demise.

Meanwhile, more than 4,000 Palestinians held in Israeli prisons went on hunger strike to protest the death of their fellow inmate. Four of these prisoners have been on strike for months now, and fears for their lives have been expressed by their families and human rights groups. According to the Israeli human rights group, B’Tselem, there are more than 4,500 Palestinian detainees, 178 of whom are being held without charge or trial.

In a press conference held on Sunday, Issa Qaraqi, the PA’s minister of detainees, said that Palestinians would continue to protest until Israel responds to the detainees’ demands. Qaraqi called for an international committee to investigate the death of Jaradat, whom he said had no prior health issues. He also warned: “The situation is already explosive because of the four Palestinians on hunger strike. Palestinians on the street and inside the prisons are seething with anger.”

The PA is trying to toe a fine line: using the specter of a third intifada to put pressure on Israel while doing much to placate its fears by reiterating that it will not tolerate any armed methods of resistance. That’s why the PA was quick to dispel rumors – and Israeli allegations – that it was stoking the protests. Senior Fatah official Jibril Rajoub said PA-Israeli security cooperation would continue. “I say on behalf of the entire Palestinian leadership that we won’t initiate any bloodshed,” he told Israel Radio, while echoing Abbas’ statement vis-à-vis Palestinians’ right to “nonviolent resistance.”

While comparisons are being made between the first and second intifadas to draw conclusions about a possible third one, it is worth noting that the frequency of West Bank clashes is a marked reflection of frustration with the PA’s inability to change the status quo. If anything, the PA is being seen as a contributor to the current situation; A few days ago PA forces were deployed (as they have been on and off in recent protests) to act as a buffer between demonstrators and Israeli soldiers in Hebron.

Settler violence has also been playing a central role in the hostilities as the number of incidents of vandalism, tree torching, car destruction and racist graffiti-drawing skyrocketed. On Saturday, many settlers, some armed with guns, attacked Palestinians in Qusra near the northern West Bank city of Nablus, uprooting residents’ trees and torching their cars. Several Palestinians were wounded by live rounds, one of whom is now in critical condition and has been transferred to Israel for further treatment.

In summary, it seems the PA wants to use this new potential intifada to coax conciliation from Israel, such as paying money owed to it from taxes, or to nudge it into some kind of move that would placate its angry streets. It may also be using this as an incentive to U.S. President Barack Obama — visiting the region in March — to push forward his own plan or outline for a permanent peace agreement.

Israel may be fearful that an intifada would take them back in time; Netanyahu has repeatedly proven himself more concerned with maintaining the status quo wherein Palestinians don’t play a major role in the national popular psyche. The last elections proved that Palestinians were barely an afterthought to many Israeli voters and he would much rather keep the focus on Iran (and Syria) any day of the week than have to deal with the Palestinians next door.

Dalia Hatuqa is a contributing writer for Al-Monitor's Palestine Pulse. A print and broadcast journalist specializing in the Middle East, she is based in the West Bank city of Ramallah and writes for several publications about politics, the economy, culture, art and design. On Twitter: @DaliaHatuqa