Jillian Kestler-D'Amours reports from the West Bank that clashes have continued daily between Palestinian youths and Israeli soldiers in Hebron following the death of a Palestinian prisoner in Israeli custody and hunger strikes by others. 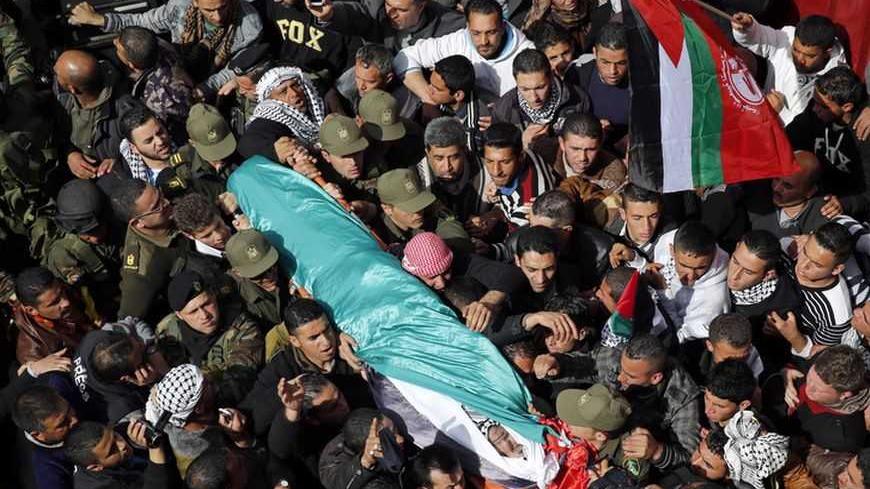 Palestinians carry the body of Arafat Jaradat, who died while in Israeli custody, before his funeral in the West Bank village of Sa'ir, near Hebron, February 25, 2013. - REUTERS/Darren Whiteside

SA’IR, WEST BANK – A widespread sense of anger and frustration was palpable as more than 10,000 people gathered on Feb. 25 in the West Bank town of Sa’ir, near Hebron, for the funeral of 30-year-old Arafat Jaradat, who had died two days earlier in an Israeli prison.

“Everyone is surprised about what happened,” Jaradat’s cousin Aded told Al-Monitor shortly before the funeral procession reached the local cemetery. “All the village is like his family. We are angry. [This shows that] anyone can come back as a martyr.” The father of two young children, Jaradat died on Feb. 23 in Israel’s Megiddo prison after five days behind bars. Israeli authorities arrested him last week on suspicion of stone throwing.

“I thought that it would be like what normally happens: he was arrested, but he would come back,” said 23-year-old Sa’ir resident Faris Qawasme, standing near the town’s central square the morning of the funeral. “Every day the army comes to the village,” Qawasme told Al-Monitor, explaining that Israeli authorities had detained 39 people from the village the same week Jaradat was arrested.

The Israeli security services first said that Jaradat had died from cardiac arrest and that before his imprisonment he suffered from health problems, including back pains and injuries to his stomach and legs. Jaradat’s family has stressed, however, that he was in good health before his arrest. After an autopsy conducted on Feb. 24, the Palestinian Authority (PA) announced that Jaradat had been killed as a result of torture during his interrogation by the Israelis and called for an independent, international investigation into his death. The Israeli Ministry of Health maintains that the exact cause of Jaradat’s death remains unknown.

“It’s not easy. There are 400 martyrs [from Sa’ir] and all of them had wives, children,” said Aded Jaradat. “Arafat was killed in cold blood. We hope for justice, but I believe that there is no justice in this world.”

Protests spread through the area

Youths have taken to the streets throughout Palestine over the past several weeks in support of the more than 4,600 Palestinian prisoners currently held in Israeli jails, including a dozen who are now conducting open-ended hunger strikes to protest their imprisonment and poor treatment.

Several thousand Palestinian prisoners launched a symbolic, one-day hunger strike in solidarity with Jaradat on Feb. 24. In addition, local protests intensified, especially in the southern West Bank, with dozens of people injured. On Feb. 25, Israeli soldiers shot two Palestinian teens in the Bethlehem area. A 13-year-old boy was shot twice with live ammunition in the Aida refugee camp; he underwent surgery and is in critical, but stable condition. Another teenager was reportedly shot in the head with a rubber-coated steel bullet and taken to Jerusalem’s Hadassah hospital for treatment, according to the Ma’an News Agency.

In Hebron, the largest Palestinian city in the occupied West Bank, there has been fighting on a daily basis between Palestinian youths and heavily armed Israeli soldiers. On the morning of Feb. 25, girls in matching school uniforms wore medical masks, elderly women clutched handkerchiefs to their noses and vendors used whatever they had to withstand the putrid odor of the liquid called "Skunk" engulfing Hebron's city center and Old City. The foul-smelling substance is a vomit-inducing, crowd-dispersal agent being used by the Israeli army — along with rubber-coated steel bullets, tear gas, live ammunition and other weapons — to deal with the protests in this densely populated city. It takes days to get rid of the chemical's stench.

Amidst the protests for Palestinian prisoners, residents of Hebron also marked the 19th anniversary of the Ibrahimi Mosque massacre. On Feb. 25, 1994, the Israeli-American settler Baruch Goldstein opened fire at the city’s holiest mosque, killing 29 Palestinians praying during Ramadan and injuring more than 100.

Shortly after the killings, Israel severely restricted Palestinian access to Shuhada Street, which lies at the heart of Hebron, linking its northern and southern parts, and previously had been one of its main thoroughfares.

In 2000, Israel barred Palestinians from walking or driving on the street altogether, while Israeli settler access remained undeterred. Today, the street and surrounding area are home to approximately 600 Israeli settlers, including 150 to 200 religious yeshiva students, who are guarded by more than 2,000 Israeli soldiers and police officers.

“If you yourself lived in a street where you can’t walk or drive to your house, how do you get there? It pushed many of the residents out. The vast majority collected their luggage and left,” said Hisham Sharabati, of the Hebron Defense Committee, in a talk on Feb. 23 at the Alternative Information Center in Beit Sahour.

The Israeli human rights group B'Tselem estimates that 304 Palestinian shops along Shuhada Street closed as a result of the Israeli restrictions. In the center of Hebron, more than 1,000 Palestinian housing units sit vacant, and more than 1,800 commercial shops have been closed, B'Tselem found.

Sharabati said that despite media reports of a third intifada, or uprising, brewing in the West Bank, Palestinian society remains divided and that getting large groups of people to participate in protests and mobilize against the occupation is difficult. “There is no widespread struggle. The political horizon is closed. Lots of people are very desperate,” he told Al-Monitor.

Others agree, including a Palestinian shopkeeper selling clothes on a nearly empty street in Hebron’s Old City a few feet from an Israeli army watchtower and under a looming Israeli settlement building and yeshiva (religious school). He declined to give Al-Monitor his name, but offered, “There are no people. People don’t come because the settlers throw stones. It’s getting more difficult. People left the city,” said the 54-year-old father of four. “But our grandfathers were born here and died here. This is our land, our homeland. We don’t have another home.”

On Feb. 22 during the Open Shuhada Street demonstration, Palestinian Authority (PA) police stood between protesting Palestinian youths and Israeli soldiers. The protesters hurled stones at the Palestinian officers, angered by what they view as PA collaboration with Israel.

“I feel upset by this situation, when the Palestinian policemen are facing their brothers and stopping them [from fighting] against the occupation. We didn’t get anything from the peace process, so how come we give Israel something [security coordination] while we get nothing from Israel?” said Badia Dwaik, a Palestinian activist with the Hebron-based Youth Against Settlements.

Some of the attendants at Arafat Jaradat’s funeral also had harsh words for the PA. “They are keeping the security of Israel. If anyone moves against Israel, they will arrest him,” 66-year-old Ayid Ishqair told Al-Monitor. “Our Authority failed completely. If they want to honor this martyr [Jaradat], stop security coordination with Israel.”

Israeli Prime Minister Benjamin Netanyahu’s envoy to the Palestinian Authority made “an unequivocal demand” on Feb. 25 for the government of PA President Mahmoud Abbas to stem the rising tide of Palestinian protests. As Daoud Kuttab reported, Israel had also just transferred $100 million in Palestinian tax revenues that it had been withholding from the PA.

Dwaik told Al-Monitor that, regardless, Palestinian youths would continue to protest and struggle against Israeli occupation and control of their daily lives. “Palestinians are fighting back against the apartheid of Israel, and we [are talking] about a new generation [that is] growing up under the occupation, under settlers’ violence, and the growth of more settlements,” Dwaik said. 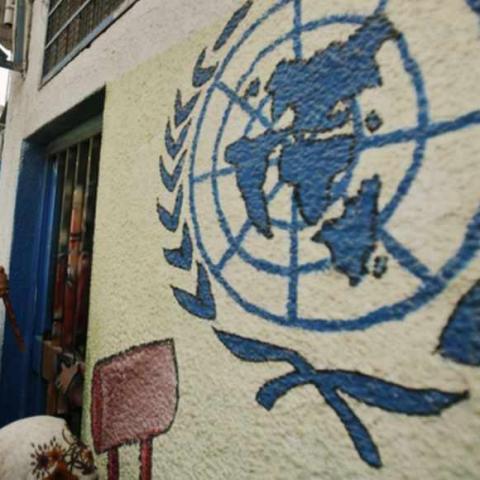