There is sufficient rage and despair in the West Bank to fuel another intifada, but Palestinian Authority Chairman Abu Mazen knows this would be a fatal blow for Fatah. 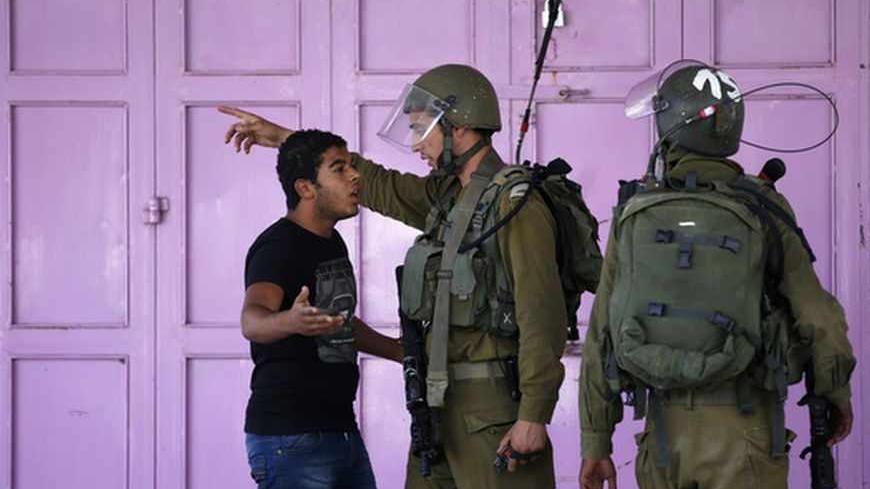 A Palestinian youth argues with Israeli soldiers as he tries to walk through a closed off area during clashes in the West Bank city of Hebron, Sept. 23, 2013. - REUTERS/Darren Whiteside

It was a difficult weekend, which brought back memories of the intifada, of days when report followed report of another terror attack, more dead and more wounded. On Sept. 20, Sgt. Tomer Hazan, an Israeli air force soldier, was abducted and killed. On Sept. 22, Sgt. Gal Kobi was shot to death near the Cave of the Patriarchs in the West Bank town of Hebron.

Mousa Abu Marzouk, a senior Hamas official who has not been heard from for a long time, wrote on his Facebook page: “We are on the verge of a third intifada, and the talks between the [Palestinian] Authority and Israel will blow up in their faces. The $4 billion promised by [US Secretary of State] John Kerry [in economic aid promised to the Palestinian Authority (PA) if it signs an agreement with Israel] will not help save the situation.”

In recent months, several assessments in Israel have predicted that the outbreak of a third intifada is only a matter of time. These concerns, which arose prior to the current round of talks between Israel and the Palestinians and were probably one of the reasons for the renewal of the negotiations, have become tangible.

In an effort to determine whether a violent uprising is — in fact — starting in the occupied territories, one needs to examine several important questions: Are either Hamas or Fatah fanning the flames in the occupied territories? Are activists of these organizations and their junior or senior leaders encouraging young Palestinians to gear up for a struggle? Can the two organizations benefit politically or diplomatically from chaos in the West Bank?

The two recent terror attacks against Israeli soldiers were carried out by a small local group. The activists who planned and carried them out were probably not sent by an organization with a structured command and detailed orders. Hazan was kidnapped and killed by a Palestinian whom he knew from his workplace in the city of Bat Yam, just south of Tel Aviv. The shooting attack in Hebron was executed by a sniper during a demonstration that took place there, and not by an organized terror cell in a planned ambush.

A cell from East Jerusalem that planned to carry out a terror attack at a shopping mall and was caught at the beginning of this month was also a small, amateur grouping. But although there does not appear to have been a guiding hand in any of the three cases, they demonstrate churning below the surface.

The two intifadas in the past broke out at local events that set the streets on fire. The first started in 1987 at the Jabaliya refugee camp in the Gaza Strip, after a traffic accident in which Palestinian laborers returning from Israel were killed. The rage over their deaths and rumors that they were killed intentionally by an Israeli army truck resulted in an eruption of violence that spread to the West Bank and lasted six years, until the signing of the Oslo Accord in 1993.

The second intifada broke out after then-opposition leader Ariel Sharon visited the Temple Mount in 2000. That was the spark that ignited violence by the Palestinian public, who were disappointed by the Oslo Accord — failing to bring about an improvement in the quality of life for residents of the occupied territories.

Neither of the intifadas was premeditated, and initially no organization was involved. It was only after the rioting broke out that Hamas and Fatah activists joined the circle of violence, set up command centers, vied for control and amassed tremendous power over the Palestinian public.

Then-Palestine Liberation Organization (PLO) leader Yasser Arafat was surprised by the outbreak of the first intifada, just as Hamas leaders were surprised when rioting broke out on the Temple Mount and the situation deteriorated into a popular uprising in 2000. The PLO signed the Oslo Accord and was recognized as a legitimate organization that established the PA, whereas Hamas won the 2006 elections against the PA because of the tremendous popularity it gained in Palestinian public opinion as the leader of the second intifada and as a promise for a better future. Both were to disappoint their constituents.

One of the elements responsible for the previous intifadas is still present: the combination of frustration and rage. Chairman Abu Mazen’s PA is in dire shape. Economically, it is dying, and were it not for the renewed negotiations with Israel, it would have expired a long time ago. Most people, even Palestinians with jobs, are seeing their financial situation steadily deteriorating. Many young people including university graduates cannot find work. On the other hand, Israel is continuing its energetic wave of settlement building, and there is no light at the end of the tunnel.

Polls conducted among Palestinians by the Palestinian Institute for Policy Research and its Director Khalil Shkaki indicate that most Palestinians do not believe contacts with Israel will lead to a diplomatic solution. Many stopped believing a long time ago in the legitimacy of the current Palestinian leadership, which, they sense, has led them to a dead end and futile talks with no future.

One thing is different from the days of September 2000, when the second intifada erupted. Arafat and Fatah not only did not try to stop the riots, they took part in them. Whereas now, Palestinian security forces are cooperating effectively with Israel, and most of the Fatah activists recruited in 2000 by violent groups admit that the intifada dealt them a fatal blow and provided Hamas with the opportunity to defeat them. These differences, between then and now, might be able to stop an uprising should one break out. The struggle between Fatah and Hamas still continues and serves as a guarantee against a new wave of violence.

Hamas, too, is in a very bad shape. Leaders of the movement and its activists are trying to find ways to recover, and a new intifada might inject new blood into the movement’s veins. This is perhaps the reason that senior Hamas official Moussa Abu Marzouk broke his lengthy silence and was quick to respond to the terror attacks, in which Hamas was not even involved. Hamas is interested in mass protests that would enlist the Palestinian public against the existing order in the West Bank, but it cannot afford to be the one organizing them.

The Palestinian street is beginning to show signs of restlessness. One spark could tip the balance in the region and neither Palestinian negotiator Saeb Erakat nor Justice Minister Tzipi Livni, Abu Mazen or Israeli Prime Minister Benjamin Netanyahu will be able to put the genie back in the bottle. Everything depends now on the ability and will of the PA to stand guard and prevent additional chaos. A new intifada will strike it a fatal blow and Fatah knows this full well. That is the difference between September 2000 and September 2013.