Five misassumptions about the second intifada

Five assumptions that shaped the Israeli and Palestinian narratives at the time of the second intifada, have been proven wrong by history, but continue to guide the two people's public opinion. 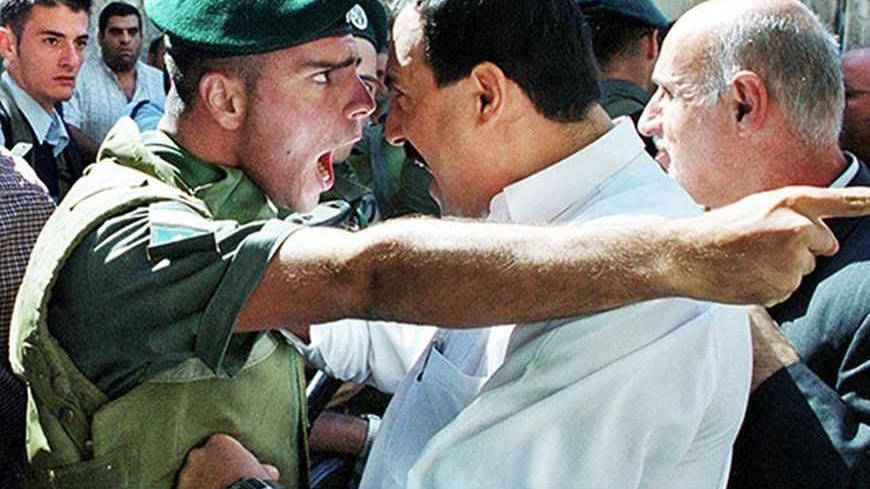 An Israeli Border Policeman and a Palestinian scream at each other face-to-face in the Old City of Jerusalem, Oct. 13, 2000. - REUTERS/Amit Shabi

This week marks thirteen years since the eruption of the Second Intifada, which is often attributed to Ariel Sharon’s visit to the Temple Mount as leader of the Opposition. Riots broke out, leaving four Palestinians dead and hundreds more wounded. The rest is history.

More than 4,000 Palestinians were killed during the course of the Second Intifada. Another 1,100 Israelis died in terrorist attacks. The wounded on both sides numbered in the tens of thousands. If there had been the slightest bit of trust between Israelis and the Palestinian before the embarrassing Camp David debacle, if there had been the slightest hint of hope for coexistence and a resolution to the conflict, it was eliminated in one fell swoop in late September 2000.

Dozens of books were written about these events in the ensuing years, and hundreds of studies were conducted. These raised an endless amount of assumptions as to the cause of the second Intifada, the people responsible for it, and the forces behind it, inciting it over the years.

Obviously, each side prefers to adopt those claims that absolve it of responsibility and present it as a victim. Most of the narratives that were adopted and developed led leaders on both sides to make decisions that proved to be mistaken in so many of the studies. The fact is that instead of stopping the terrible bloodshed, they only made it worse.

Let’s take a look at five of those basic assumptions, which later proved to be mistaken.

Assumption No. 1: If Israel were to use force and nip the uprising in the bud, the forces behind the Intifada would be quelled, and things would return to the way they were. That was a mistake.

Following orders from the political leadership, the IDF expended so much extreme force within a month that it actually fanned the fires of the Intifada, causing most of the population of the West Bank and Gaza to take up the cause. Those one million bullets fired by the IDF in a single month left an indelible mark and determined the future course of events. They eliminated any inhibitions and made all means acceptable.

Assumption No. 2: Palestinian Chairman Yasser Arafat carefully planned the outbreak of this Intifada, so that if he were to be put under siege or eliminated, the Intifada would die with him. This was also a mistake.

Not only did the Israeli approach of fighting against the Palestinian Authority and weakening it until it was crushed, even including placing Arafat under siege in the Mukataa under constant threat that he would be eliminated, fail to restore calm to the Territories. It actually enraged the Palestinians to see their leaders, icons of Palestinian nationalism, degraded like that. They wanted to avenge the humiliation.

Assumption No. 3: Most Fatah activists believed that joining the war against Israeli would improve their personal and national stature, and that they would force Israel to draw the necessary conclusions and come to the negotiating table. That was a mistake too.

Actually, this was the most common mistake among the leadership of the Second Intifada. They believed that the First Intifada led to the Oslo Accords, and that through a second intifada they could bring the Israelis to negotiate a more just peace agreement from a position of power. What actually happened was that the loss of trust and support for a peace agreement with the Palestinians became the central motif of Israeli public opinion. One basic assumption that became the consensus was that the Palestinians could not be trusted, and that they encourage the murder of Israelis.

This approach, which has yet to change, completely shattered the Israeli left and caused some of the most ardent supporters of the Oslo Accords to change their minds. The strengthening of the Israeli right and the breaking of the gridlock that characterized Israeli society during the two decades preceding the Second Intifada are direct consequences of this assumption.

Assumption No. 4: Israel’s policy of assassinations. The basic assumption of Israel’s security establishment was that assassinating the Intifada’s top leadership and activists would clear the ground, resulting in calm and the end of the Intifada. It was also a mistake.

In fact, the assassination policy, which was promoted by the Shin Bet often despite to the opinions of senior IDF officials, soon came to be conducted wholesale. The problem was that for every activist killed, whether he was from Fatah, Hamas, or Islamic Jihad, there was always someone to step into his shoes, and these replacements were more sophisticated and more determined to wreak vengeance and to fight against the Israelis.

What actually happened was that the assassination policy killed any chance to end the Intifada on more than one occasion. Take, for example, the assassination of Ra’ed al-Karmi, an activist in Fatah’s al-Aqsa Martyrs Brigades in Tulkarm, in January 2002. Most researchers and no small number of senior defense officials in Israel, who were serving at the time agree that the assassination of al-Karmi reignited the Intifada after it seemed to be waning, whether this was under orders from Yasser Arafat, who was concerned about President Bush’s response in the wake of the 9/11 attacks, or simply out of exhaustion.

Instead, the Second Intifada gained momentum from the moment al-Karmi was assassinated, and in 2002, suicide attacks throughout Israel became a matter of course.

Assumption No. 5: Shattering the Palestinian Authority. Throughout the Second Intifada, the Israeli narrative was that causing damage to the official institutions of the Palestinian Authority, and especially its security network, would terrify Fatah members, thereby forcing them to come to their senses and stop anyone who tries to launch a terrorist attack in Israel, if only out of fear of reprisal. That was the central mistake in the Israeli approach.

In hindsight, destroying the Palestinian Authority’s security network not only led to the collapse of the Palestinian security forces. From that point on, anyone who tried, or even considered, preventing some armed Palestinian group or other from organizing, regardless of their affiliation, could be considered a collaborator and a traitor.

The Palestinians wanted vengeance. They wanted to fight fire with fire and war with war. That is something the decision makers in Israel failed to understand. The shattering of the Palestinian Authority’s official institutions not only failed to foster the rise of moderate forces. It led to the rise of extremists instead, including Hamas and Islamic Jihad. As they say, the rest is history.

It has been thirteen years since the Second Intifada erupted, and it looks like the parties have only learned from some of their past mistakes. While it is now clear to Israelis and Palestinians alike that breaking all the accepted rules and norms will not necessarily result in some preferential circumstance or other, which they can shape as they will for their own benefit, the two parties are still facing off against each other. They continue to analyze the other’s behavior and intent, and most of all, each other’s capacity, but they are going about it the wrong way.

Both Israel and the Palestinian Authority are convinced that the only way to reach an agreement is to have Prime Minister Benjamin Netanyahu and Palestinian President Abu Mazen make a bold decision. But the situation in the diplomatic arena is just like it was during the Intifada. It is the forces on the ground that drag the leaders along with them and force them to make decisions. If Abu Mazen and Benjamin Netanyahu do not feel that this is what the people want and that they have their backing and support, they will not take the necessary steps needed to compromise.

Peace begins at home. That is why, without making any deep indent or laying the appropriate groundwork, there is no chance that we will see a historic handshake on the White House lawn any time soon.