Israel and the Palestinian Authority share a common interest of fighting emerging al-Qaeda cells in the West Bank and the proliferation of global jihad. 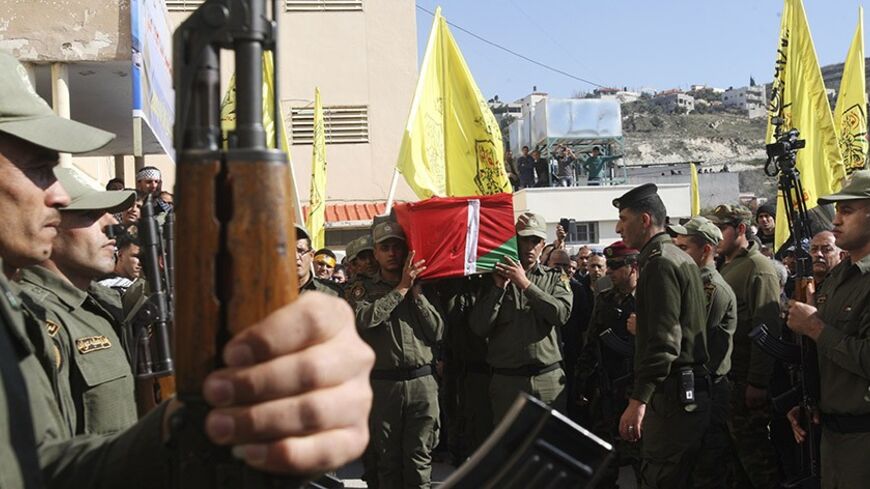 This is the second time within a year that the Israeli Shin Bet has uncovered an al-Qaeda terror cell on the West Bank that planned to execute a terror attack in Israel. News regarding the recent arrest of the cell was released only this week on Jan. 22. According to the Shin Bet, the cell that was captured received orders from Ayman al-Zawahri, Osama bin Laden’s heir as al-Qaeda leader. Two members of the cell are residents of east Jerusalem and the third one lives in Jenin. The three planned attacks on the US Embassy in Tel Aviv, on Israel's Convention Center in Jerusalem and on buses in the area. Members of the earlier al-Qaeda cell organized in the West Bank were killed in a joint Shin Bet-IDF (Israel Defense Forces) operation about a year ago, in the Yatta village in the southern Hebron Hills.

The emergence of world jihad cells in the West Bank is of great concern also to Palestinian security forces, and the battle against them is a joint interest of both parties. The implications of a mega terrorist attack against Israel from the West Bank is clearly apparent to Palestinian President Mahmoud Abbas (Abu Mazen) and his security forces. The authority is fighting with considerable effort to prevent organized terror on the part of known organizations such as Hamas and Islamic Jihad, as well as organizations of world jihad cells that have recently emerged on its territory.

As a result of the Oslo Accords, Israel and the Palestinians cooperate on security issues. This cooperation has known ups and downs through the years, and was completely cut off during the second intifada. After PLO Chairman Yasser Arafat’s death and the election of Abbas to replace him, the new Palestinian Authority chairman instructed his security advisers Mahmoud Dahlan and Jibril Rajoub to gradually restore the security coordination with the Israelis. And this was not an easy decision.

Abbas was strongly criticized by many Fatah members for this move. They viewed — and some still feel this way — this cooperation as one-sided exploitation by Israel, which penetrates Palestinian territories from time to time, in violation of basic understandings between the sides, to arrest suspects. Abbas had advocated ending the armed uprising against the Israelis and preferred the negotiation route, even before he was appointed to the role of chairman. Thus, he did not put a halt to the work of the security teams, which averted in this manner dozens of terrorist acts against Israelis in recent years.

Another player in this security coordination are the Americans, who provide encouragement, professional assistance and actual resources for the training of Palestinian forces in bases in Amman and the Palestinian Authority. Palestinian police units, named “Dayton Forces” after Lt. Gen. Keith Dayton, head of the American security assistance project, beefed up the police forces in the territories about seven years ago. Simultaneously with training policemen, it was decided that to increase the efficiency of the forces on the ground after the second intifada it was also necessary to conduct effective intelligence work to thwart attacks. Dayton initiated renewal of the intelligence cooperation between the sides, at first only partially because of the credibility crisis in the wake of the second intifada. Later on, however, this cooperation became an everyday matter based on common interests.

Throughout the years, the Palestinians had one absolutely necessary condition, the violation of which could destroy the efficacious relationship between the sides. They demanded that security cooperation remained absolutely secret, with an emphasis on exchange of intelligence information that led to the arrest of suspects for activities against Israelis. The authority’s security men did not want to be perceived by the West Bank population as Israeli collaborators — one of the most severe accusations in Palestinian society. The role of Palestinians in the joint operations remained secret. Sometimes, Israel would transfer incriminating information to the Palestinians about a suspect or suspects in terror organizations, and they would perform the arrest. In cases in which suspects were viewed as being “ticking bombs,” the Palestinians stood aside and special IDF forces entered to arrest them.

Occasionally, the Palestinians claimed that Israel’s cooperation with them was not transparent and not fair; they said that in many cases, Israel hid sensitive information from them and surprised them with unilateral actions. Nevertheless, security cooperation between Israel and the Palestinian Authority has been successful since the end of the second intifada. Even during the days when mutual accusations and harsh confrontations are taking place between the political leaderships, and even when accusations are heard in Israel that there is no partner and no one on which to rely on the other side — it emerges that with regard to the security issue, each of the two sides has a partner, and each of them has someone on whom it can rely.

If the Israeli public were aware of even some of the operational successes of the cooperation with the Palestinians — despite the obligatory mantle of secrecy — then public opinion might very well be less skeptical regarding Mahmoud Abbas' diplomatic intentions. Meanwhile, the fact is that Israel does have an appropriate, functioning security partner — while that diplomatic partner is subject to insults, scorn and scathing criticism among the Israeli leadership. Day-to-day follow-up of world jihad cell organizations in the West Bank is a joint interest of Israelis and Palestinians. The security cooperation to date proves that when there is a shared goal, there is someone to talk to and someone to rely on. And perhaps it behooves us to implement this lesson in the diplomatic circuit as well.