The lawyer for veteran jihadist Jamal, who has been linked to the US consulate attack in Benghazi, told Al-Monitor's Mohamed Fadel Fahmy that his client called the Sinai the next frontier in the "conflict with the Zionists and Americans." 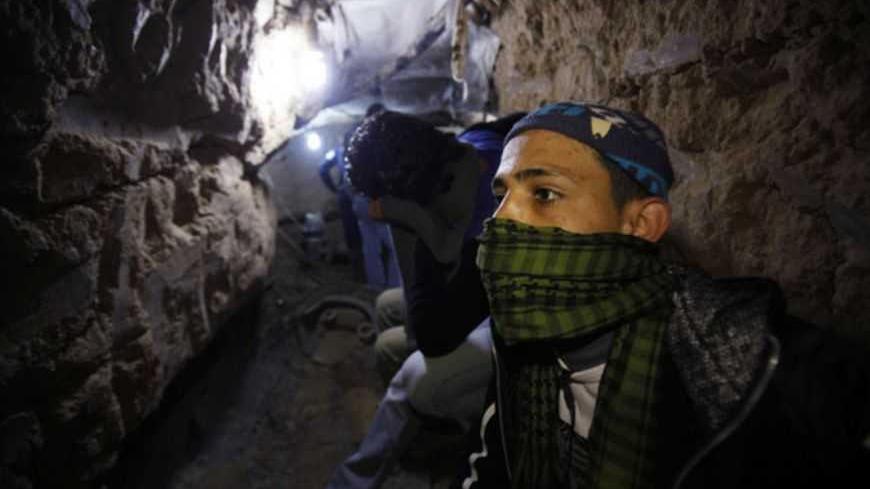 The Egyptian revolution came as a "gift from god," as one of the hundreds of jihadists released from prison after the uprising that toppled former President Hosni Mubarak in 2011 called it. Stockpiles of weapons have made their way into Egypt through the neighboring porous Libyan and Sudanese borders since the region has fallen into a state of lawlessness, which came with the shake-up of the security apparatuses in scarred nations searching for their new identities.

Al-Qaeda inspired groups in the Sinai Peninsula have puzzled the international community with their bold statements and videos posted on the net, but the various Egyptian security branches have not been able to pinpoint their direct involvement in any of the many military operations and kidnappings, or the weapons smuggling to Gaza through an intricate web of tunnels located in North Sinai, close to the Israeli border. The audacity of such militant groups has left Egypt and its neighboring countries with a national security threat that is brewing by the day, as the wave of violence and killing is broadcast on a daily basis on Egypt's dozens of television channels and talk-shows.

Obtaining transparent information, specifically in national security cases, in Egypt has become a challenge, and the terrorism case known in the press as the "Nasr City Cell" is no exception.

The 26 Egyptians and one Tunisian officially accused of plotting attacks against the Egyptian government, leading opposition figures and media personalities have all denied these accusations. A security raid on their safe house in the upper-class neighborhood of Nasr City in Cairo on Oct. 24, 2012, left their financier ringleader Karim El Bedewi, a veteran jihadist, dead after a fierce gun battle. Footage broadcast on local TV channels portrayed security forces confiscating machine guns, rockets and explosives from the charred, damaged apartment and its rooftop, where members of the cell took refuge.

Local press announced that El Bedewi blew himself up during the attack. A forensic report presented to the prosecutor by Magdi Salem, the Islamist lawyer handling the case, proved that the corpse was intact and that he was shot dead. More importantly, National Security leaked news to the press that investigations led to the arrest of Mohamed Jamal al-Kashef (aka, Abu Ahmed), another veteran jihadist who had fought alongside the Egyptian Islamic Jihad and Ayman al-Zawahri, al-Qaeda's chief in Afghanistan in the early 1990s.

The international press took serious interest in the case after news emerged that the terror cell had connections to the Sept. 11, 2012, attack on the US consulate in Benghazi, Libya. The Wall Street Journal was the first to quote unidentified US officials accusing Jamal of establishing training camps in the Libyan Desert for a group of fighters known as the "Jamal Network," which allegedly took part in the attack that left the US ambassador and three of his diplomats dead.

Magdi Salem, the lawyer representing the terror cell and a founding member of the Egyptian Islamic Jihad detained in the 80s for 20 years under the Mubarak regime, was recently released after the revolution alongside hundreds of jihadists _ including Jamal _ who were pardoned by the Supreme Council of the Armed Forces and more recently by President Mohammed Morsi.

"Jamal traveled to Libya alone, and his name was on the blacklist but [he] was eventually allowed to enter and fought alongside the rebels in the city of Ajdabya until Gadhafi was killed. He indeed established training camps for the rebels wishing to fight Gadhafi's forces and depended on local funding from different groups but had no intentions of killing Americans or exporting attacks onto Egyptian soil," said Salem, sifting through the case's thick file, sitting in the modest office of his recently established Islamic Party in Cairo.

According to Salem, Jamal stated in the interrogation sessions he attended with his client that he had "plans to assist in any place where jihad is applicable, such as Iraq, Palestine, Libya and Syria." Salem also confirmed that a presidential decision prevented US officials from attending the interrogations or having access to the file, which was never an obstacle for US authorities during the Mubarak era.

Salem stated that the official charges brought against the cell by the State Security prosecutor are "forming a terrorist organization and plans to conduct military operations in Egypt."

"No official charges are related to Libya, but the interrogator asked him once if he knew anything about the US consulate attack. We proved he was present in Egypt during the bombing of the embassy, completing his master's degree in Islamic Sharia," Salem added.

When the prosecutor pressed Jamal on whether he had intentions to conduct military operations in the Sinai and if he has any connection to the Salafi jihadi groups there, he said, "Yes, we consider Sinai the next frontier of conflict with the Zionists and Americans, and we will be the first line of defense should it be attacked by the invaders," Salem explained, reading the confessions of his client.

Salem reinstated Jamal's dedication to the Palestinian cause and read out loud more of his client's confessions, including, "We have smuggled advanced weapons to Gaza, using the Sinai tunnels, as its our duty to assist our Palestinian brothers."

Jamal was arrested in a train station in the city of Sharqia, where he had moved with his Yemeni wife and his only son, Ahmed, to look for a job and continue his studies, according to his lawyer.

Nine members of the cell are currently at large and the rest of the defendants are imprisoned in Tora Prison in Cairo, awaiting their next court hearing on April 20 at the North Cairo Court. Salem confirmed that they are being treated well and have not been subjected to any torture and that he has identified what he called "embarrassing loops in the case" that he is using as part of his defense.

"I proved to the prosecutor that one defendant has been crippled in bed for a year and a half, the fifth defendant is a military officer and the police only found out when they arrested him briefly before they let him go, and the 13th man was heading to jihad in Syria when he was arrested at the airport. The prosecutor had no photos, evidence, or real investigations, it's sheer nonsense if you ask me," Salem concluded, insisting there is no organization or any plans for attacks in Egypt, according to Jamal's official confessions.

During the January 25th uprising, Jamal was detained in State Security and being tortured to confess that he blew up the Coptic Church in Alexandria on New Year's Eve, according to Salem and Mohamed al-Zawahri (the brother of al-Qaeda's chief), who was imprisoned with Jamal and released last March and who is currently the head of the Salafi jihadi movement in Egypt.

"Jamal had been detained for 10 years upon his return from Afghanistan with no charges and Mubarak's oppressive regime wanted to frame him for the church bombing, but he never confessed. He was innocent and has nothing to do with the US consulate or the church," commented al-Zawahri in defense of his comrade.

The case took a new turn after two Egyptian newspapers (Al Ahram and Al Youm Al Sabi) published two letters reportedly found on a computer confiscated during the raid, written by Jamal to his "teacher," Ayman al-Zawahri. They contain no mention of the US consulate Benghazi attack. In excerpts of the first letter, published in Al Youm Al Sabi, Jamal says he wanted to see Zawahri after his release from prison in Egypt, "so that I can be by your side, which is an honor for me." He says he failed because he was "banned from travel and his name was on a list of international terror in more than one Arab country."

Jamal states he could not reach Zawahri even when he tried to use fake travel documents. Jamal mentions that he sent Zawahri a trusted messenger who was an inmate with him in prison. Jamal then boasts about his accomplishments including establishing solid forces in Egypt and Libya and groups in Sinai where jihadists have openly announced their allegiance to al-Qaeda. Jamal adds that he received funding from "our brothers in Yemen, but it was much less that what is required to purchase arms, set up training camps, move vehicles into the Sinai Peninsula, and provide for the brothers who work with us."

"Smuggling small arms and missiles from Libya into Egypt is costly," Jamal writes, concluding his letter with a request that Zawahri reply to his plea for further assistance and funding.

In the second letter, published by Al Ahram, a state-owned paper, reportedly dated Aug. 18, 2012, Jamal says that he was a member of Zawahri's personal guard and that he was the "teacher" in 1996 "for the brothers in Yemen," including the leader of the al-Qaeda emir there at the time.

Jamal's lawyer claims he only learned about the contents of the letters when they were published in the press and considers them irrelevant to the incrimination of his client.

"Jamal has not been confronted with those letters by the prosecutor. If they are authentic, then they still clearly indicate that he has not communicated or met al-Qaeda's chief, al-Zawahri, but only aspired to do so," said Salem.