Hamas leaders have been calling on West Bank Palestinians to attack Israel in efforts to provoke a religious war against Israel, as they depict a situation where the Israeli right wing is about to take over the Temple Mount. 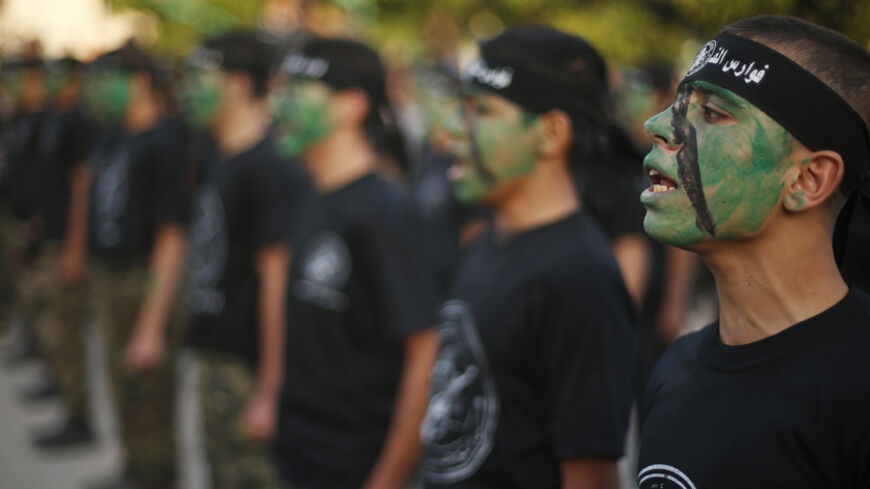 Two conditions are required for the evolvement of an intifada: a grim reality and a guiding hand. Looking back, we can see that in the two previous intifadas, the bleak reality in the territories led to a local uprising that spread; only later on, the guiding hand came into play. It's that guiding hand that then took over and steered the intifada to its benefit.

The first intifada was ignited by a road accident at the Yad Mordechai intersection, north of the Gaza Strip in December 1987, in which four Palestinians were killed. The riots that broke out in the Jabaliya refugee camp quickly spread throughout the Gaza Strip and the West Bank. Subsequently, the Fatah movement established the “United National Command for the Escalation of the Uprising in the Occupied Territories.” The Fatah field commanders in Gaza and the West Bank controlled the intifada for about five years, until the signing of the Oslo Accord in 1993 and the establishment of the Palestinian Authority (PA).

The second intifada erupted after then opposition leader Ariel Sharon visited the Temple Mount in September 2000. Once again, the local riots spread quickly; however, it then took the Hamas movement some six months to be the leading command of the violent incidents.

In 2014, reams of information have been written in articles, research reports and intelligence assessments on the despair and hopelessness that have led to the current round of violence between Israelis and Palestinians. And even if some in the Israeli defense establishment believe that it's still too early to classify the recent bloody events as a third intifada, it is already clear that the guiding hand calling for and inciting to violence and terrorist attacks is, once again, the Hamas movement.

The desire of Hamas leaders to ignite the West Bank and fan the flames of the uprising in East Jerusalem is no secret. The calls on the Palestinians to launch a third intifada are openly made during prayers in the mosques, as well as by media channels affiliated with Hamas. In addition, intensive activity has been going on in the field. While, so far, it has apparently not been aimed at setting up terrorist cells designed to carry out attacks, the Palestinians are encouraged and urged to clash with the Israeli security forces and set out on independent terrorist attacks.

The report's authors further speculated that this time, Hamas would try to initiate terrorist attacks in Area C, which is under full Israeli civil and security control, and in the environs of Jerusalem, where the Palestinian security apparatuses have no control.

The report, leaked at the time to the Israeli and Palestinian media channels, went largely unnoticed. And this, mainly since it was believed that the report was designed to pressure Israel to make progress in the diplomatic negotiations, and also because its authors failed to specify their sources of information and the rationale of the conclusions drawn. However, these days, given the onslaught of terrorist attacks in Israel, it's already clear that the authors of the report in the Palestinian security apparatuses accurately anticipated the moves taken by Hamas and the role of the movement as the guiding hand encouraging and fomenting the insurrection.

Hamas' Al-Aqsa TV and websites associated with the movement, including that of the Hamas military wing, Izz ad-Din al-Qassam Brigades, have been calling on the Palestinians for months now to get out and defend the sanctity of the Temple Mount, in the face of its “desecration” by Jewish right-wing activists. The Temple Mount has become an effective tool of intimidation in the Hamas propaganda, which presents an alarming picture of the catastrophic acts planned by Israel on the Temple Mount, liable to culminate in the destruction of Al-Aqsa Mosque.

During the “Day of Rage” events in Gaza on Oct. 31, the deputy head of Hamas' political bureau, Ismail Haniyeh, addressed the demonstrating crowds. He told the rioters that the Jews planned to destroy the Temple Mount and that it was the duty of the Palestinians to thwart the plot. “The Israeli enemy has entered a very dangerous stage in the implementation of its plans against the sacred mosque,” Haniyeh warned.

Hamas leader Khaled Meshaal made no secret of the movement’s goals in an interview Nov. 9 with the Qatari newspaper Al-Sharq. Meshaal said: “In view of the settlements and the attempt to Judaize Jerusalem, there is no place for calm. We will foil the scheme through resistance and by calling for an uprising against the occupation.”

The “calling for an uprising” by Hamas was actually made even before Operation Protective Edge. But the tone and intensity of the calls heightened following the operation, because of the frustration of the Hamas leaders at the outcome of the fighting and the situation of the movement, which was still mired in dire straits. On Oct. 25, Mahmoud al-Zahar, one of Hamas' senior figures in Gaza, called for escalation and confrontation with the “occupation forces,” saying that the Palestinians in the West Bank have to struggle on two fronts — with the Israeli army forces and the Palestinian security forces. In his opinion, the security coordination between the two prevents further escalation of the intifada.

These statements corroborate as well the assessment by the Palestinian security apparatuses in the said report that Hamas will focus its activities in the areas outside the jurisdiction of the PA.

The attempt by Hamas to inflame the area and create an apparent state of emergency — which would rally the Palestinians — is further reflected in the declaration of the Izz ad-Din al-Qassam Brigades announcing the establishment of a “people's army” in anticipation of the battle for Jerusalem. Mohammed Abu Askar, a senior Hamas military wing officer, proclaimed at the Jabaliya refugee camp on Nov. 7 that Hamas is recruiting 2,500 combatants for the “holy mission.”

However, as it has turned out, the so-called people's army is no more than a media spin. Israeli defense officials have claimed that there are no signs whatsoever of the establishment of such a popular army. In other words, this seems to be an imaginary public relations army — yet another ploy aimed at creating a sense of a religious emergency situation — that obliges all devout Palestinian believers to join on behalf of the rescue operation.