The real intifada is taking place within Israeli political right

IDF personnel estimate that the current spike of terror does not foretell a third intifada and recommend the political echelon restore calm in the West Bank. 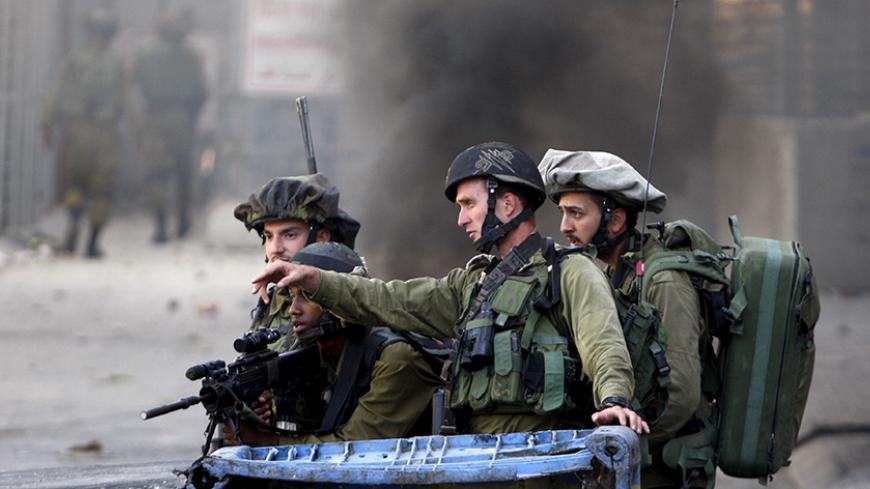 The Israel Defense Forces (IDF) refuses to adopt the term “intifada” to describe what is now taking place in the territories. Instead, the current definition used by the army closely resembles what the Palestinians call the recent events: an “outburst.” A high-placed military officer told Al-Monitor this week that it is possible that we are entering an era that will include recurring, periodic outbursts of localized violence. According to IDF indexes, there is still no public grass-roots Palestinian support for an uprising along the lines of the first (1987) or second (2000) intifada. A senior Israeli officer asking that his name not be divulged told me that “last Saturday night [Oct. 3], a total of only 3,900 Palestinians went out to demonstrate throughout Judea and Samaria. That is the number, the only number. A number like this does not constitute an intifada.”

Meanwhile, the real intifada is taking place within the Israeli political right. The settler chiefs, supported by HaBayit HaYehudi Party Ministers Naftali Bennett and Ayelet Shaked from within the coalition and firebrand oppositionist Yisrael Beitenu head Avigdor Liberman from without, demonstrated outside the Jerusalem house of Prime Minister Benjamin Netanyahu on Oct. 5. Three ministers attended this demonstration: Zeev Elkin, Yariv Levin and Haim Katz — ministers who are protesting the policies of the government to which they belong. This is, evidently, a unique Israeli concept.

One way or the other, the right-wing demonstrators demand the immediate establishment of a new settlement in the territories as a response to the comings and goings of President Mahmoud Abbas and the violent “outbursts.” They call for a return to another Defensive Shield operation, similar to the 2002 IDF counterterrorism operation in the West Bank during the second intifada, in order to restore Israel’s security and deterrence.

It is actually the IDF that is functioning in this situation like the responsible adult. Israeli Chief of Staff Lt. Gen. Gadi Eizenkot is a restrained, composed human being, pragmatic and realistic. He does not try to conceal his views and does not kowtow to the diplomatic echelons. He reportedly said on Oct. 6 that the IDF still has full freedom of action and that the diplomatic echelons completely back up the military.

Regarding calls for embarking on a Defensive Shield-type operation, the IDF only ridicules that. “This is an absurd demand that is totally cut off from reality,” said an officer, serving in a high-level position in Judea and Samaria, to Al-Monitor, speaking on condition of anonymity. “When we embarked on the Defensive Shield operation, the Palestinians in the Jenin refugee camps and the Casbah in Nablus had not seen an Israeli soldier up close for almost 10 years. In order to carry out an arrest in a Palestinian city, we had to bring a brigade in and surround the region with a division of soldiers. A lot has changed since then, as [former Palestinian Prime Minister] Salam Fayyad and Mahmoud Abbas brought law and order into the territories. On Saturday night [Oct. 3], a force of Israeli Mista’arvim commando soldiers [disguised as Arabs] infiltrated the hospital in Nablus and pulled out one of the murderers of the Henkin couple [killed on Oct. 1], a feat that was accomplished almost without violence. Once upon a time, an entire brigade would have been needed to pull this off. Today, it is achieved with limited manpower of Israeli Mista’arvim unit soldiers, with reasonable backup and protection around them. So who needs another Defensive Shield? Against whom? What territory would we conquer? After all, the IDF knows how to go in anywhere with a minimum of friction, so why this idle chatter?”

As of the morning of Oct. 7, the IDF assessment of the situation is that the territory is seeing preliminary signs of the restoration of peace and quiet. In the words of a high-ranking Israeli officer, speaking on condition of anonymity, “It could be that we’re seeing the beginning of the end of the current round [of violence].” Yes, the violent incidents in the territories in recent weeks are viewed by the IDF as a dangerous turn of events, but not as a war. According to IDF intelligence, the following elements are fueling the fires: the tension on the Temple Mount, the attack against the Dawabsha family in the Douma village (and the fact that the firebombers have not yet been apprehended by the IDF), Abbas’ difficult political position and the absence of any diplomatic horizon vis-a-vis an Israeli right-wing government. The final component is the incitement coming from the Hamas movement as well as from the Northern Branch of the Islamic Movement, headed by Sheikh Raed Salah, the “head of the snake.”

“All these,” said the Israeli officer, “are the elements that fan the blazes, which give fuel to the fires.” He added, “There are also moderating, calming elements as well. The equilibrium between inciting and calming elements is still very delicate at this stage. At any moment, an unexpected, dramatic event can take place that will lead to an explosion. But barring such a possibility, there is a good chance that we will soon succeed in weathering the current disruption, until the next one comes along.”

To raise the chances for a successful weathering of the events, high-level IDF personnel are maximizing their influence vis-a-vis the heavy pressures exerted by the right, in order to forestall the imposing of sanctions on the Palestinian population. “It is important to leave the population outside the circle of violence,” said senior IDF officers. On Oct. 6, 47,000 Palestinian laborers went to work within Israel’s borders. A senior Israeli officer, speaking on condition of anonymity, said, “Think about this number: 47,000 workers, each of whom supports around six souls. That means that about a quarter of a million Palestinians ate their dinners today due to work in Israel. That’s better than a quarter of a million of bored Palestinians throwing stones in Ramallah’s Palestine Square,” he added.

It is due to these factors that the IDF exerts heavy pressure on the diplomatic echelons in favor of preserving Palestinian routine work in Israel. This pressure on the diplomatic echelons continues even in contradiction to warnings issued by the Shin Bet — which is calling for harsher measures against imminent outbursts — so as not to adversely affect what is called the “texture of daily life” of the Palestinian population. This includes the continuation of a flexible policy regarding checkpoints and roadblocks to allow the Palestinians more rapid movement between the villages and cities. But according to the settler heads, this policy makes it easier for all the various Palestinian militants to carry out their terror attacks; thus, the debate continues. At this stage, Netanyahu and Defense Minister Moshe Ya’alon are siding with the IDF, which is trying to “contain” the events, to react with proportionate force, not to burn down their bridges and instead maximize the chances for cooling down the atmosphere. The problem is that under the explosive situation created on the ground, something can go wrong at any given moment or a terror attack can succeed, leading to deterioration. No one is really interested in an escalation, except for Hamas and other terror organizations. However, that does not mean that an escalation will not take place.

On Oct. 6, the riots reached Jaffa — the lesser known other half of Tel Aviv, as both cities are under one municipal authority. Jaffa is a mixed city of Arabs and Jews who live in a fascinating but fragile state of coexistence. A large demonstration of Jaffa Arabs against what is happening on the Temple Mount deteriorated to the point that roadblocks were erected, stones were hurled and a bus was set on fire. When such sights come to Tel Aviv, this is a bad sign regarding the “current round of violence” that the IDF hopes to successfully “weather out.”