Despite the latest terror attacks in the Etzion settlement and at the center of Tel Aviv, Israeli security sources say that Palestinian President Mahmoud Abbas is committed to security cooperation with Israel and will work to defuse tension. 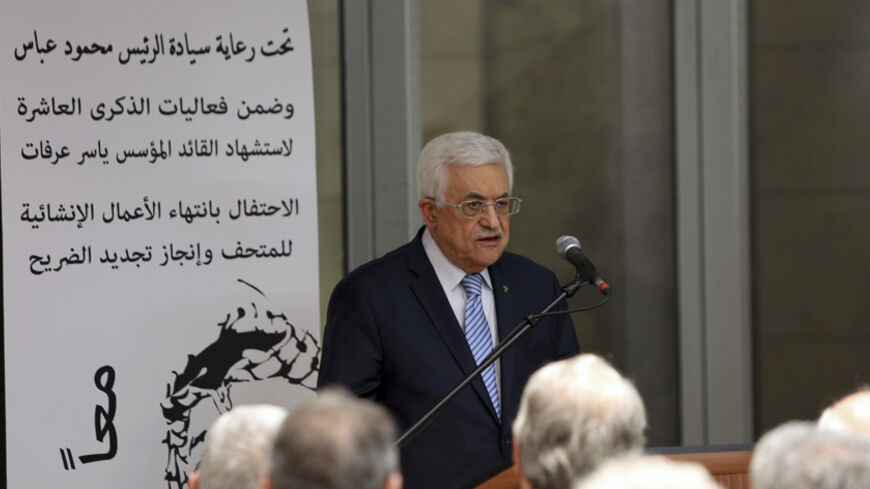 To the Israel Defense Forces, it is not at all clear that we are in the midst of a third intifada — quite the contrary.

“We are constantly checking out the situation on the ground,'' a high-ranking military source in Judea-Samaria who asked to remain anonymous told Al-Monitor on Nov. 12. ''At this stage, all the current data we examine and all the key indicators are indeed not remaining steady; but on the other hand, they do not register a significant increase. Yes, there is a rise in the number of incidents, but all the stabilizing forces are still present with no small amount of influence. True, there are violations of civil order and Molotov cocktails are thrown and there were terror attacks in recent weeks. Still, in order to get a comprehensive view of reality we have to take a deep breath and examine things with a professional eye.” The officer added, “The results of such a probe show that we aren’t there yet.”

Until now, the Judea-Samaria territories have remained free of third intifada incidents. The IDF was concerned that the riots and incidents in Jerusalem would overflow into the West Bank. Instead, they remain confined mainly to East Jerusalem, with the addition of a few violent outbursts in sovereign Israel, including the killing of an Arab youth by police in Kfar Kana and the riots in Taibe, an Arab-Israeli village where a lone Jewish driver was almost lynched.

This week, the violence began to overflow. There was a vehicular and stabbing attack in the Etzion settlement Bloc (close to the site where the three Israeli youths were abducted and murdered this past summer) and a fatal stabbing in Tel Aviv by a Palestinian terrorist from the West Bank. Do these herald the spread of riots into Judea-Samaria? IDF sources feel that it’s too soon to tell.

“Yesterday was a tough day in the territories,” the officer said. “The Palestinians commemorated 10 years since the death of Yasser Arafat, and the preceding day there had been two brutal attacks. In the course of the day, we counted 36 incidents that took place in Judea-Samaria. All in all, a thousand Palestinians participated. This is a small number, even negligible. We don’t see the masses out in the streets; this is not an uprising. Yes, things are escalating and we are not indifferent to what is going on. The indices rise here and there, but there is no dramatic change. The current situation is still stable.

"It is important to add that things can change. There is a certain potential for more escalation. Hamas, from a distance, is trying to set the West Bank on fire and individuals are carrying out terror attacks, but these are spontaneous incidents that must be examined with the perspective of time. Currently, there is no organized terror infrastructure in the territories and the Palestinian Authority leadership continues to send directives to the Palestinian security apparatuses, as before. Meaning fight terror and prevent it, cooperate with the Israeli security forces and maintain order.”

There are many causes for overall escalation in the territories: the incitement, the dissent over the Temple Mount and the friction with the settlers. But there are also other actors on the ground, called “stabilizing agents” by the IDF. The high-ranking officer I spoke to itemized them one by one. First on the list is the Palestinian leadership, mainly President Mahmoud Abbas. The Israeli diplomatic echelon (guided by Foreign Minister Avigdor Liberman, Economy and Trade Minister Naftali Bennett and even Prime Minister Benjamin Netanyahu) view Abbas as “worse than Arafat” and someone who incites to terror and undermines stability. But the IDF, on the other hand, views him as the chief stabilizing force in the area.

“Mahmoud Abbas was the one to ruin the 10-year anniversary celebrations for Arafat’s death,” the military official told Al-Monitor. “Since [Fatah senior official] Jibril Rajoub was in charge of these events, and since there is bad blood between him and Abbas, the Palestinian chairman closed the budgetary faucet. That’s what reduced the scope of events, together with the potential for deterioration.”

Most important of all, in spite of his diplomatic blitz against Israel, and despite his radical statements regarding the Temple Mount, Abbas continues to stand firm in all matters related to security. Abbas’ security apparatuses continue to avert terror, his orders are crystal clear and unequivocal and cooperation with Israel continues as usual.

“We check the scope of arrests of Hamas people by the apparatuses,” they say in the IDF, “and it remains steady. Terror operatives continue to be arrested and interrogated, while the number of arrests is either on an upward trend or remains stable. Security coordination with Israel continues to be sacred. Abbas continues to say the right things in his own voice. He spoke out against the abduction of the youths, he does not hesitate to blame Hamas and attack its conduct, his voice is loud and clear and embodies the commanding leadership spirit of the security apparatuses. It's a very significant stabilizing element. It can change very quickly, but meanwhile it has not changed,” they say in the IDF.

Additional stabilizing forces include the financial situation, Israeli deterrence and Israel’s policy of restrained use of force in Judea-Samaria. As opposed to the small hard-core group of extremists among the settlers who act provocatively and try to set the area on fire, the IDF does as much as it can to avert an escalation.

“The economic situation is a key factor,” said the military source. “Your average Palestinian knows what’s happening around him. He keeps track of what is happening in Syria, Lebanon, Jordan, Iraq. He is familiar with the situation in Egypt. He knows that compared to all these regions, he’s in a better place. Also, the tough experiences from the 'Brother's Keeper' operation that was conducted in the West Bank after the abduction of the youths — all these have their effect. The Palestinians spent a few weeks during which the IDF maintained a large presence in their villages and cities. They know that’s not very pleasant. They have much more freedom of movement now than during the days of the second intifada. They have no desire to go back to that place again. Ultimately, if you wake up a Palestinian civilian in the middle of the night and ask him what is important to him, he’ll tell you that while the Temple Mount worries him and the continuation of the occupation depresses him, what is most important to him is to bring home a livelihood to his children and live peacefully. That is exactly the reason that we are not in the midst of a popular uprising or mass demonstrations at the moment.

"But it is important to add that all this can change overnight. If an attempt by a few 'price tag' rioters to torch a mosque went awry and several worshipers were killed, for example, that could change the situation in seconds. A severe incident on the Temple Mount. Alternatively, a brutal terror attack on Israelis. We live in an explosive place and under complex conditions. We can’t remain complacent for even a second.”

The best illustration of this reality took place a few days ago in a visit and meeting conducted by the Israeli officer, who was charged with a significant part of maintaining security in Judea-Samaria, with Palestinians in the West Bank town of Tulkarm. In the course of the meeting, almost all the participants expressed worry over the escalation in the territories, the situation on the Temple Mount and all the other incidents. But the Palestinians directed most of their attention to the situation in their own city.

“What interests us is Tulkarm,” they told the officer, and took him on a tour of their city, ending in the local amusement park. It turns out that what really bothered them was the bureaucracy in the Israeli Office of Standards and Regulations, regarding the authorization of some of the amusement park facilities.

“At the end of the day, real life prevails over everything else,” they say in the IDF. At least for now.