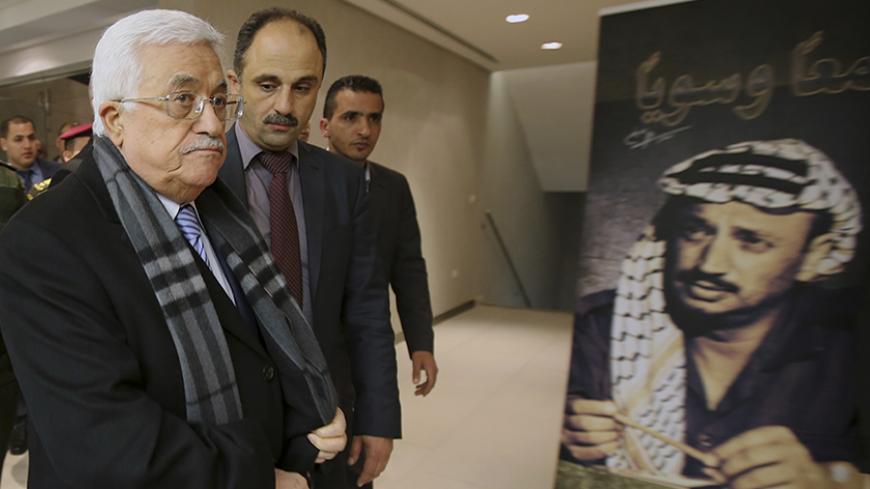 Palestinian President Mahmoud Abbas arrives for the opening of a museum of late Palestinian leader Yasser Arafat in Ramallah, Nov. 9, 2014.

An impassioned public debate has been taking place recently in Israel regarding Palestinian Authority President Mahmoud Abbas. This is a fascinating, vital debate, whose potential results could be disastrous. The adversaries stand on either side of the issue.

On the right, all those who have made Abbas out to be one of the most bitter enemies in history: the upper ranks of the political class in Israel, which includes all the right-wing ministers, such as Prime Minister Benjamin Netanyahu, Foreign Minister Avigdor Liberman, Minister of Economy and Trade Naftali Bennett, Minister of Intelligence Yuval Steinitz and, a little less so, Minister of Defense Moshe Ya’alon.

All believe that Abbas is no partner, and that the violence that has overrun Israel in the last several months stems from his inspiration. Bennett takes it a step further and even calls Abbas a “terrorist.” The others don’t take it so far, but they put the blame on the Palestinian leader for the extreme incitement, local terrorism, the tension over the Temple Mount and the Al-Aqsa Mosque and many other evils.

On the other side are several politicians from the center-left. like Justice Minister Tzipi Livni and Finance Minister Yair Lapid, but they are less important for this story. The other side is led by the Israeli security apparatus. Its members, it seems, have been fiercely defending Abbas and his rule in the West Bank. I reported here Nov. 13 about a senior Israeli officer stationed in Judea and Samaria, who told me in a confidential conversation that Abbas was the solution and not the problem. The officer detailed the consistent and persistent war against terrorism that Abbas' people are waging, the close intelligence and operational cooperation between the Palestinian security organizations and the IDF and Shin Bet, the arrest of many Hamas militants by the Palestinian Authority, and the simple fact that all this results in sparing the lives of many Israelis every month.

Yoram Cohen, the head of Shin Bet, joined him this week when he appeared before the Foreign Affairs and Defense Committee of the Knesset and was asked about this issue on Nov. 18. Cohen remarked that Abbas does not encourage terrorism, not openly and not “under the table.” Knesset members from the left leaked his testimony to the media. They forgot to mention the other part of his testimony, which dealt with the issue of East Jerusalem and Temple Mount. On this issue, Abbas does, in fact, show radicalization in the last few months, especially in his rhetoric.

According to the head of Shin Bet, the Palestinian leader’s extremist speeches on the need to “defend al-Aqsa,” could be, for some Palestinians, inspiration for terrorist acts. But at the bottom line, Cohen agreed and toed the line with the Israeli security forces, according to which Abbas, the Palestinian Authority apparatus and the current Palestinian rule in the West Bank are a security asset for Israel.

“During Operation Brother’s Keeper after the kidnapping of the three Israeli youths [June 12], and during Operation Protective Edge which followed it,” a high-ranking Israeli security official told me this week, “Abbas made every effort to prevent an intifada in Judea and Samaria.”

The effort the IDF and the Shin Bet cite was real, even heroic. The fact is that the unrest in East Jerusalem has not spread to the cities of Judea and Samaria. Nablus, Jenin, Tulkarm, Qalqilya and Ramallah are quiet (in Hebron, the quiet isn’t stable), while East Jerusalem is burning.

“What Abbas is doing,” said a high-ranking Israeli officer, “is separating all of the West Bank from Jerusalem. It’s a legitimate political maneuver of a leader who has to walk between the lines. Jerusalem is a total Palestinian-Islamic consensus.”

“Abbas has a problem with Hamas, which is constantly after him, and with the Palestinian street,” the officer said. “He has to toe the line on Jerusalem. True, his rhetoric on the subject is too inflammatory and we would be glad if he didn’t use the term ‘shahids’ [martyrs], but in the end he has to maneuver.”

Who’s right in this debate? It’s hard to judge.

An in-depth examination yields a strange fact: Technically, both sides are right. The heads of the Israeli security organizations who describe the wonders of Abbas in all that concerns thwarting terrorist attacks are accurate. But the Israeli politicians who describe the wild and false incitement directed by the Palestinian Authority against Israelis and Jews also do not miss the mark.

Israel has different mechanisms for tracking every Palestinian statement in every type of media, and the findings are scary. The incitement is growing consistently worse and the harshness of the rhetoric is breaking records. Almost everyone, including the Palestinian Authority’s and Fatah’s media, is calling for a war of destruction against the Jews, calling them “monkeys and pigs,” liberally repeating imaginary urban legends and eastern blood libels, and adding fuel to the fire.

But after touching on the technicalities, we have to deal with the real issue. There has always been Arab and Islamic incitement against Israel. And it’s not exclusive to the Arabs. This week, when Jewish worshippers were slaughtered at a synagogue in West Jerusalem on Nov. 18, many Western media outlets missed the mark, producing biased and outrageous reports on the monstrous incident. CNN’s initial report, for instance, was that the worshippers were killed as they prayed in a mosque. And there are many other examples.

The only way to stop the incitement, is to hold a real, candid and consistent peace process. The Netanyahu government has abandoned the peace process and so it would be hard for it to complain about incitement, despite the new heights of lies and barbarism that it is reaching almost daily.

That and more: For many years, Israel has dreamed of a Palestinian leader who would dare to condemn terrorism with his own voice. And then Abbas arrived. He did it while PLO leader Yasser Arafat was still alive. He continued to do so after Arafat died, and even more forcefully, until this very moment. Afterward, Israel dreamed of a situation when there would be “one law, one weapon, under one authority” in the Palestinian Authority. The situation in the territories in the previous decade was totally chaotic, replete with armed jihadi gangs, factories producing explosive belts and an industry of suicide bombers — a jungle no one could control.

And here, along with former Prime Minister Salam Fayyad, Abbas succeeded in doing the unfathomable. Today there is one authority, one weapon, and one law. There are prisons full of Islamic Jihad and Hamas militants. There’s complete cooperation with Israel.

“All these things,” says a senior member of the Foreign Affairs and Defense Committee of the Knesset, “save many Jews’ lives. If we will continue to kick Mahmoud Abbas in this way, very soon we’ll find that we miss him.”