The meeting of former Prime Minister Ehud Olmert and Palestinian President Mahmoud Abbas discredits the longstanding claim by Israel’s political right that Abbas is not a partner for peace negotiations. 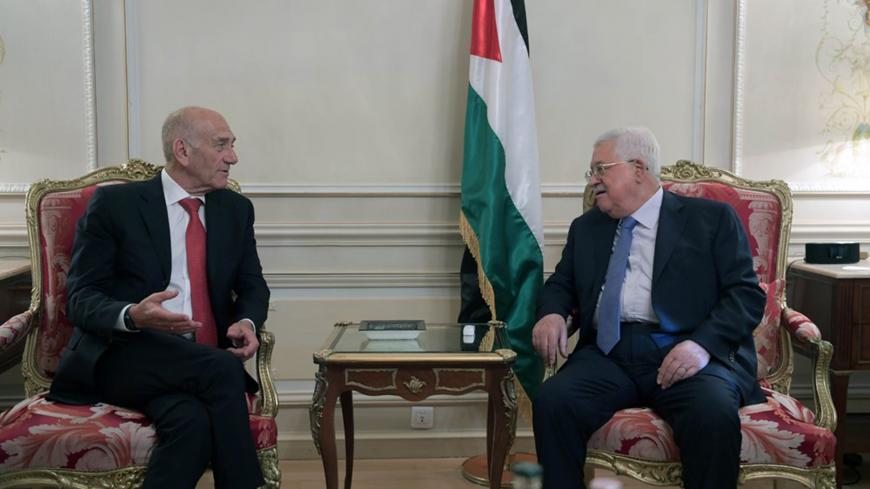 Former Prime Minister Ehud Olmert met Sept. 21 in Paris with Palestinian President Mahmoud Abbas who was on his way to the UN General Assembly session in New York. The statement issued on Olmert’s behalf after the meeting portrayed Abbas in a positive light — unlike the tarred image of the Palestinian leader favored by the Israeli right, especially by Prime Minister Benjamin Netanyahu and Defense Minister Avigdor Liberman, as a peace rejectionist who supports terrorism and incites against the State of Israel.

Olmert praised Abbas, calling him “a great political leader and the most relevant person for the future developments in the relations between Israel and Palestinians.” Olmert also said Abbas had never officially rejected the peace initiative he had proposed to him in September 2008, a claim that the right found particularly offensive given its telling of events.

The narrative emerging from various disclosures over the past decade about the Olmert-Abbas peace talks has the Israeli leader offering the Palestinians 95% of the West Bank and the division of Jerusalem into an Israeli and a Palestinian capital, with Abbas “disappearing” at the moment of truth. The political right has repeatedly argued that Abbas’ rejection of such a generous offer was ultimate proof that he did not want peace and aspired to wipe Israel off the face of the earth. Now Olmert is discrediting the right’s alibi for refusing to forge a peace deal with the Palestinians, generating accusations of treason, no less.

The head of the Almagor Terror Victims Association, Meir Indor, called on Justice Minister Ayelet Shaked to prosecute Olmert for treason and on President Reuven Rivlin to revoke the decision that commuted Olmert’s 27-month sentence for bribery, effectively approving an early release.

Michael Oren of the center-right Kulanu Party, a deputy minister in the prime minister’s office and former Israeli ambassador to Washington, claimed the Olmert-Abbas meeting was illegal and would have carried a lengthy prison term under US federal law.

However, the most virulent attacks came from the Likud Party. While the prime minister’s office did not attack him directly, Netanyahu’s people under the guise of “a senior Likud source” were quoted as saying, “Olmert — who offered Abbas the Western Wall — has now turned into his faithful mouthpiece. … The reason for his extreme demands is not peace but rather the elimination of the State of Israel."

Minister of Science and Technology Ofir Akunis, for many years Netanyahu’s spokesman, reiterated the same mantra deeply imprinted in the Israeli narrative, undeterred by Olmert’s contraction. “After Abbas humiliated him [Olmert] when he did not respond to his miserable offer to establish a Palestinian state with [East] Jerusalem as its capital and [an Israeli] withdrawal to the 1967 borders, Olmert is now spreading lies against the elected Israeli government,” he said.

Former Prime Minister Ehud Barak, by no means an Olmert fan, felt compelled to react to these accusations of treason and to come to his defense. “Olmert committed grave offenses, was punished and served jail time. But he is not a traitor. He is just as much of a true Zionist patriot as Netanyahu,” Barak tweeted.

The hysterical reaction of the Likud and other right-wing parties is hardly surprising. Olmert has challenged the demonization and legitimization of Abbas in which their leaders have engaged for many years. Under their influence, many significant chapters in Abbas’ biography have been hidden from public view. Abbas, 83, was elected to his position after the death of PLO leader Yasser Arafat in 2004. His stated agenda favored diplomacy and rejected the violent Palestinian intifada raging at the time — views with which he fearlessly challenged Arafat when he was still in power. During the second intifada years (2000 to 2005), Abbas repeatedly argued that this was not the way to obtain Palestinian independence, even as he realized his people might consider him a traitor. His lengthy term has been a period of vicissitudes, of fury and frustration, but throughout he remained committed to the war against terror.

Almost all the heads of Israel’s security agencies will attest to this fact, describing him as the main mitigating force against all-consuming violence in the West Bank. He was the one who prevented the so-called individual terror attacks that started in the fall of 2015 from turning into an all-out insurrection. His actions earned him praise from the heads of the defense establishment, which they voiced repeatedly at government and defense Cabinet meetings. In April 2016, for example, Chief of Staff Lt. Gen. Gadi Eizenkot told government ministers that “Abbas is fighting terrorism.” A month before, Intelligence Chief Maj. Gen. Hetzl Halevi said the Palestinian leader was seeking to restore calm and ordering his security forces to prevent terror attacks against Israel.

In fact, already in November 2014, in an assessment he presented to the Knesset’s Foreign Affairs and Defense Committee, then Shin Bet head Yoram Cohen contradicted claims by Netanyahu, Liberman and Education Minister Naftali Bennett that Palestinian terror attacks were the result of incitement led by Abbas. “Abbas is not interested in terror and is not leading toward terror,” Cohen said categorically.

At a Sept. 2 meeting with activists of the Israeli Peace Now movement and with opposition Knesset members, Abbas revealed that he generally meets with the current Shin Bet head Nadav Argaman once a month. Despite all the domestic Palestinian pressures exerted on him and the humiliation meted out by the Trump administration and Israel, Abbas is adhering to the security coordination with Israel.

Netanyahu’s right-wing government fears that unless Abbas is portrayed as a rejectionist, Israelis might start believing in a two-state solution and demanding the dismantling of Israeli settlements. This would put a spoke in the wheels of the annexation discourse based on the premise that Israel does not have a Palestinian partner with whom to forge peace and therefore has to annex parts of the West Bank. The right would much rather Israelis remember Abbas’ unfortunate May 2018 remark that the Holocaust was caused by the Jews’ “social behavior” than take cognizance of his real actions — the ones illustrating the seriousness of his intentions.