How Abbas proved his courage to Israelis

Criticism at home did not deter Palestinian President Mahmoud Abbas from participating at the funeral of President Shimon Peres and demonstrating his commitment to peace. 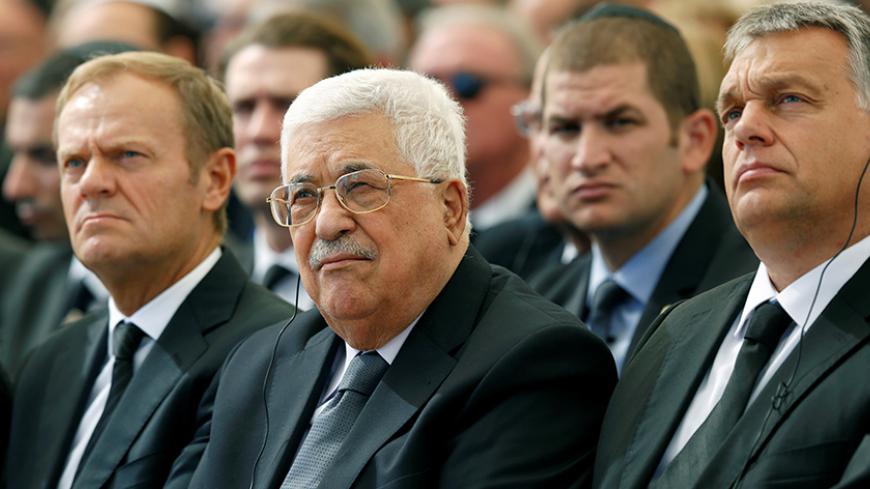 During the Sept. 30 state funeral at Mt. Herzl cemetery for Shimon Peres, Israel’s ninth president and former prime minister, the cameras paused at length on the face of Palestinian President Mahmoud Abbas. When one of Peres’ sons eulogized his father, Abbas appeared to be covering his face as if shedding a tear over the demise of his partner to the Oslo process. That photo unleashed a huge storm in the Palestinian Authority (PA), the Gaza Strip and across the Arab world. Hamas news websites and social media decried this action, with one site saying, “Mahmoud Abbas weeps over the departure of a terrorist.” Others said that although he covered his face, his true colors were revealed.

The criticism that was leveled at the Palestinian president came as no surprise to senior Fatah officials who predicted its magnitude. They knew that the footage would be exploited by his rivals — both from Hamas and from his own Fatah movement. While municipal elections originally scheduled for Oct. 8 in the West Bank and Gaza were suspended by a Palestinian court last month, there is no doubt that when and if they take place, the footage of Abbas with Peres will surface again and be used against Abbas. The West Bank elections have now been reset for February.

“Mahmoud Abbas knew exactly what he was getting into. Yet he chose to pursue the road he believes in,” a Fatah official told Al-Monitor on condition of anonymity. According to that official, despite the fact that many Fatah people thought it was a misstep by the president, as soon as his mind was made up to go ahead with it, they took it upon themselves to defend his decision and explain that he had taken yet another step proving he is a man of peace who wants to make peace with the Israelis.

After being demonized for many years and considered by large sectors of the Israeli public not as a peace partner but rather as a partner to unbridled incitement who promotes terror attacks, Abbas certainly demonstrated courage. Prime Minister Benjamin Netanyahu oftentimes repeated such sentiments, including at the November 2015 20-year memorial for Prime Minister Yitzhak Rabin, who was Peres’ partner to the Oslo process. “We are seeing growing incitement by the president of the PA, and this incitement is translated into acts on the ground,” Netanyahu charged.

Naftali Bennett, the education minister and chairman of HaBayit HaYehudi, was even more critical. After the terror attack on a Jerusalem synagogue in 2014, he called the Palestinian president “one of the biggest terrorists to come out of the Palestinian people and someone who is directly responsible for the Jewish blood that was spilled on the talith [prayer shawl] and tefillin [phylacteries].”

Yuval Steinitz, the minister of national infrastructure and one of Netanyahu’s confidants, even pledged to expose Abbas’ real face just as Israel did to his predecessor, the late Yasser Arafat (who, according to Steinitz, was on the one hand speaking in favor of peace and on the other inciting terror).

The Israeli public has long been familiar with Defense Minister Avigdor Liberman's attitude toward Abbas and the smear campaign Liberman has waged against the Palestinian president. Liberman, whose goal is to do whatever it takes to bring Abbas’ term to an end, has been in charge of the Israeli Defense Ministry since May.

The efforts the Palestinian president has made during 2016 to curb the wave of terrorism in the PA have gone unrecognized by the Israeli political establishment, be it from the left or right. And such recognition and gratitude have been forthcoming only on rare occasions from the defense establishment. This lack of recognition has occurred even though there is no one in Israel’s defense establishment who isn’t aware of Abbas’ contribution to calming the atmosphere and the fact that he continues to consider security cooperation with Israel sacred, as he has put it. He remains steadfast despite realizing that he is paying a stiff political price among his fellow Palestinians.

Only rarely have Israeli security officials dared to acknowledge — and even then anonymously — the role Abbas has played in calming the ground and his bona fide war on terror.

Surprised by Abbas’ rare gesture, most Israelis are unaware of the harsh criticism leveled by the Palestinians at their president and the fact that he is being denigrated for his security cooperation and his objection to a violent struggle against Israel. Even when former PLO Chief Arafat was at the helm, Abbas publicly opposed Arafat's policy and confronted him head-on during the fiery days of the second intifada, from 2000 to 2005. Back then, speaking against the armed struggle was tantamount to high treason.

With almost the same resolve he decided to attend Peres’ state funeral and did not balk at shaking hands with his rival, Netanyahu, in front of the TV cameras. Abbas was undoubtedly aware that a picture of him and Netanyahu, whose eulogy failed to mention Abbas, would be exploited by his rivals.

His attendance at Peres’ funeral shows Israelis to what extent they have been saturated with misleading information about the character of the Palestinian president. The delegitimization campaign spearheaded by Netanyahu, his ministers and right-wing Knesset members was designed to justify their opposition to a diplomatic process that would come at a price — handing over territories, evicting settlements and perhaps also paying a political cost.

For years Abbas has been touted in Israel as a spineless, cowardly leader. Even if he wants to champion diplomatic steps, he is not cut out for it. Former Prime Minister Ariel Sharon even called him a “featherless fledgling.”

Yet Abbas demonstrated great courage, showing that unlike his portrayal in Israel, he is not afraid of domestic criticism. If he has to embrace dramatic moves in a peace process with Israel, he will be able to follow through with determination. Anyone who is willing to supply his rivals with propaganda weapons only to pay his last respects to his partner to the Oslo process can also make brave decisions in a diplomatic negotiation.

At the end of the funeral procession, Abbas stood before Netanyahu face to face. After a brief, awkward moment, he said, “It’s been a long time.” That was a broad hint. Netanyahu responded by saying how much he appreciated his attendance. Yet it was Netanyahu’s wife, Sara, who picked up the gauntlet. “We’d be happy to host you in our residence in Jerusalem,” she said. All we can do now is wait and see if that was mere etiquette.