Why Netanyahu and Liberman are boycotting Arab party members

Prime Minister Benjamin Netanyahu and Defense Minister Avigdor Liberman have called upon the coalition to boycott parliamentary activities of the Joint List for missing the funeral of former President Shimon Peres, even if they themselves were the late president's bitter rivals. 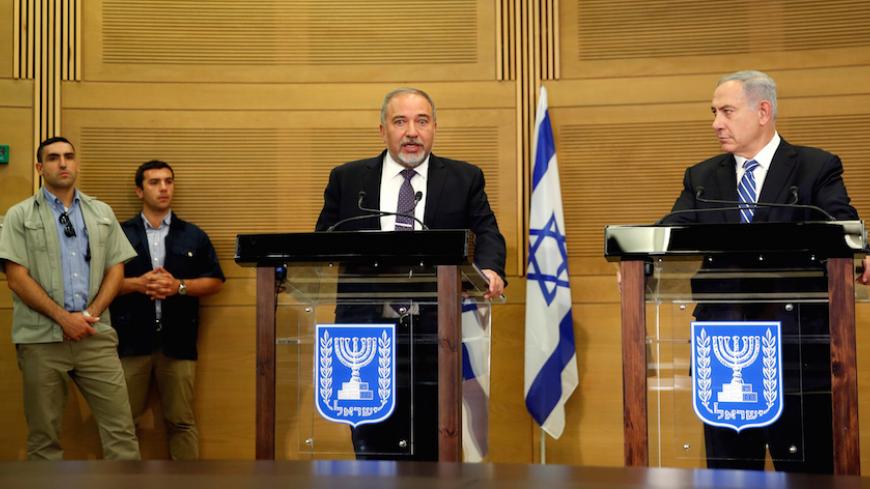 The suggestion was made by Defense Minister Avigdor Liberman, but the sweeping order to members of the governing coalition to boycott members of the Joint List, a unified slate of predominantly Arab parties, was given by Prime Minister Benjamin Netanyahu. Liberman, who makes no secret of his political agenda advocating the removal of Arab legislators from the Knesset, claimed the boycott decision is a tit for tat following the Joint List’s decision to boycott the September state funeral for former President Shimon Peres.

At an Oct. 9 meeting of the coalition party leaders, Liberman said, “Members of the Joint List had proven there was no longer any point in talking to them or even arguing with them, and that a decision has to be made mandating a boycott of all their Knesset appearances and speeches.” Netanyahu was not far behind. If there’s a move afoot to boycott Arab lawmakers, he can’t let Liberman get all the credit for the move from the right-wing constituency that shares Liberman’s views about the Joint List. Liberman was the one who spearheaded the move to raise the election threshold in the previous Knesset. His intention was to make sure the Arab parties would not have enough votes to make it into the Knesset, but this actually ended up uniting the small Arab parties into one faction, which together garnered 13 Knesset seats, largely passing the threshold. Now Netanyahu, too, is seeking ways to delegitimize these Knesset members.

On orders from the prime minister, coalition whip Knesset member David Bitan instructed the six coalition parties to prepare for retaliatory action over the absence of the Arab lawmakers from the Peres funeral. He went even further and claimed that their decision to boycott the funeral delivered a message of incitement. “Members of the Joint List understood that the Peres funeral was an international event with the participation of presidents from around the world, and they saw an opportunity to convey a message of incitement against Israel,” Bitan said.

But after these declarations were made, it turned out that according to the Knesset by-laws, at least one Cabinet minister must be present at any plenary debate — meaning that the coalition as a whole cannot systematically boycott appearances of Arab Knesset members at the plenum. Hence, a decision was made that the boycott would only last one week. And so at the start of the Knesset’s winter session on Oct. 31, all the lawmakers of the coalition parties (apart from Tourism Minister Yariv Levin who stayed, as the regulation stipulates) walked out of the plenary when Knesset member Taleb Abu Arar of the Joint List got up to speak about a motion of no confidence in the government tabled by his party.

Liberman was pleased. After it turned out that the entire coalition had followed his suggestion, he called the Arab Knesset members “representatives of terrorist organizations.” The defense minister said, “The Knesset cannot simply ignore the decision by representatives of terrorist organizations to boycott the funeral of the ninth president. … We’re talking about a representation of terror organizations in the Israeli Knesset. They are illegitimate and unwanted here. I hope that boycott lasts until the end of the session, at least as far as [my] Yisrael Beitenu Party is concerned.”

The Joint List’s decision to not attend the funeral drew harsh criticism not only from Israeli Jews, but also within the Arab community. As I wrote here on Oct. 7, their decision was an egregious mistake that was especially glaring given the attendance of Palestinian President Mahmoud Abbas, who displayed political courage and came to pay his last respects to his partner on the Oslo Accord road to peace. Nonetheless, participation in a state funeral is still a right and not an obligation. One can only wonder at Netanyahu and Liberman, who were among Peres’ most bitter political rivals, who are now presenting themselves as the wronged defenders of the former president’s legacy and demanding in his name retaliatory action avenging his honor.

Are they and the other coalition members really motivated by sincere concern for Peres’ dignity, or is this simply another opportunity to erode the legitimacy of Arab lawmakers in the eyes of Israel’s Jewish public? Knesset member Ahmad Tibi of the Joint List told Al-Monitor that the prime minister’s boycott is an unprecedented move. Tibi cannot recall another case of a prime minister ordering his government to boycott an entire faction that represents a broad national public simply because it stayed away from a funeral. “One can disagree with us. I accept the criticism against us with love and respect and even know where it’s coming from. But it’s a long way from that to a parliamentary boycott of an entire faction,” he said. Tibi believes there is an ongoing attempt to delegitimize the Arab Knesset members. “Unfortunately, just as Netanyahu managed to make Abbas — the most pragmatic Palestinian leader alive — into an illegitimate figure in the eyes of the Israeli public, he is trying to do to members of the Joint List,” he said. Tibi claimed that the prime minister is doing what he’s doing because he knows that the political left and center need the Joint List if they want to topple his rule and replace the right wing in power.

Tibi was apparently unhappy with the decision to boycott Peres' funeral, but he does not say so out right. “I’ll tell you a secret,” he said. “A consultation was not held among all the members of the [Arab] factions. … Some accepted the decision and made it public, others preferred to stay mum. I am one of those who preferred to be quiet. I was in Moscow [at the time of the funeral], but I called the [Peres] family during the seven-day mourning period to comfort them.”

Tibi and other Arab Knesset members claim they cannot remember a time of such unbridled incitement to hatred against them, and he further argued that it could end in an assassination. “There are threats to kill and do away with us, and I say that in the end, there’s a risk of such a thing happening. When a prime minister continues to incite against us, against the [Israeli] Arabs in general, anything we say that is not consensual is regarded as a declaration of war, as incitement against the Jews, even though it’s not. Someone could take it in the direction of violence."