Though its constituency's top priority is toppling Prime Minister Benjamin Netanyahu, the Joint List has not forgotten the vitriol expressed over the years by Yisrael Beitenu leader Avigdor Liberman. 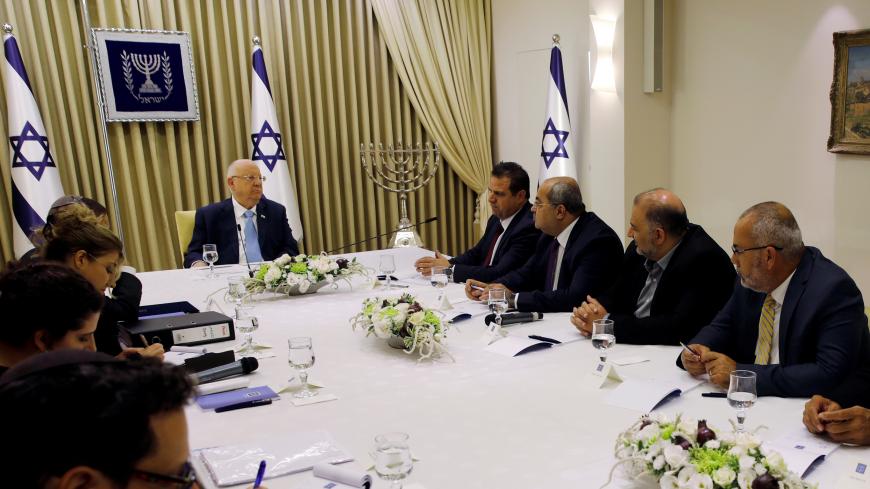 Members of the Joint List sit with Israeli President Reuven Rivlin as he began talks with political parties over who should form a new government, at his residence in Jerusalem, Sept. 22, 2019. - Menachen Kahana/Pool via REUTERS

The events of the past two days — the killing of Islamic Jihad senior Bahaa Abu el-Atta and the ensuing rocket fire from Gaza — only worsened the dilemma Arab-Israeli Knesset members are facing. Just a few hours before Abu el-Atta was killed, knowing that this action would provoke a conflict with Gaza and generate rocket fire, Prime Minister Benjamin Netanyahu posted a warning to Blue and White leader Benny Gantz over coalition talks. Netanyahu warned Gantz against considering a minority government supported by the Joint List, tweeting that Arab Knesset member "Ahmad Tibi once wrote about [PLO leader] Yasser Arafat that he will stay in their hearts forever. This is the man Gantz and [Yisrael Beitenu leader Avigdor] Liberman are counting on for a government? A minority government supported by the Arab parties equals danger to Israel."

The prevailing atmosphere in Israel would surely make it difficult on Gantz, and more so on Liberman, to establish such a government. But also within the Joint List, which was considering supporting a Gantz government from the outside, things have changed. Knesset members Aida Touma-Sliman and Ofer Kasif demonstrated against the killing of Abu el-Atta, and the Likud was quick to repeat its claim that the Arab lawmakers keep supporting terrorists.

Netanyahu and the Likud’s claims that the Arab Knesset members are Hamas supporters got another push the past two days with the Gaza escalation, but this was certainly not the first time they have advanced this argument. In a Nov. 11 speech at a conference hosted by the conservative Makor Rishon newspaper, Netanyahu declared that such a government poses a threat to Israel’s security. Netanyahu then appealed directly to Gantz, saying, “These are the people with whom you want to form a government? This is a direct slap in the face of the soldiers that you and I sent into battle.” Netanyahu was essentially calling the move treason. To prove his point, Netanyahu brought up an incident during the 2014 war in Gaza that he led with Gantz. “Do you remember what Tibi did during the operation? He read from the Knesset podium the names of the terrorists who were killed and said that the IDF is committing war crimes."

Not to be outdone, Tibi tweeted back, “I mentioned the names of children and their mothers killed by rockets directed at their homes. Netanyahu, you are lying and misleading. They were not terrorists, they were martyrs, victims, children with a name. … Under pressure, Netanyahu continues to incite and lie. You have to get out or be kicked out.”

Tibi’s reaction encapsulated the dilemma he faces as head of Ta’al along with the heads of the other three parties comprising the Joint List, including Balad, which did not endorse Gantz for the premiership. Is the removal of Netanyahu from the prime minister’s office worth the price of putting up with Liberman?

Putting aside his latest declarations on the Gaza escalation, Liberman is currently acting like the responsible adult in the political arena. Nevertheless, he is the same politician who has incited and continues to incite more than anyone else, even more than Netanyahu, against the country’s Arab citizens and their elected representatives. There is virtually no name he has not called them. On Oct. 31, he called the Joint List a “fifth column.” In October 2015, he accused it of being more dangerous than Hamas and Islamic Jihad. In the 2015 election campaign, his party’s slogan was “Ariel for Israel, Umm al-Fahm for Palestine.” In March 2014, the Knesset adopted a bill he sponsored to raise the electoral threshold with a view to keeping at least some of the smaller Arab parties out of the Knesset. The move boomeranged when the four leading but ideologically disparate Arab parties joined forces and formed a significant political bloc. In the current Knesset, the Joint List is the third largest faction.

That is not all. In December 2017, following clashes in the Wadi Ara region in central Israel between police and Arab demonstrators protesting US President Donald Trump’s declaration about moving the US Embassy from Tel Aviv to Jerusalem, Liberman, then defense minister, called on Israelis to boycott the Wadi Ara towns and villages and stop frequenting their shops and restaurants. “Those people don’t belong in Israel,” he said. “They have no connection to the State of Israel.” The members of the Joint List must now decide whether to help remove the comparatively moderate and restrained Netanyahu from power and get Liberman instead.

Knesset member Yousef Jabarin, a resident of Umm al-Fahm, has already decided that he cannot forgive Liberman for his years of incitement. Liberman’s election slogan, Jabarin tweeted, “was based on incitement and spreading hatred against the residents of Umm al-Fahm, my hometown, and the entire Arab public. Does anyone imagine that I would support a government in which he is a senior partner? And then he would be able to carry out his [population] transfer plan.” His fellow Hadash lawmaker Aida Touma Suleiman has also made her decision. “We want to bring down Netanyahu,” she tweeted, “But not at the cost of greenlighting Liberman.” The only Jewish Knesset member of the Hadash party, Ofer Kasif, tweeted, “I completely agree with my friend Aida: Bringing down the racist Netanyahu is essential, but not at the cost of approving an equally bad racist.” And let us not forget the three Balad Knesset members. If they could not bring themselves to endorse Gantz, how could they support Liberman?

However, Joint List leaders Ayman Odeh and Tibi, who held exploratory talks with Blue and White regarding possible cooperation, and the head of the Islamic Movement’s Ra’am Party, Knesset member Mansour Abbas, are carefully weighing their words on the conflict with the Islamic Jihad and IDF attacks in Gaza. They are hearing all the voices and the doubts of their voters, 470,000 people who will not forgive their leaders if they pass up what is perhaps a unique, historic opportunity to remove the far-right regime that has humiliated them and downgraded them to second-class citizens with the controversial 2018 nationality law.

A Joint List Knesset member confirmed to Al-Monitor on condition of anonymity that he and his colleagues are dealing with the toughest challenge of their political lives. He regrets that a referendum among Joint List voters to hear their views on the issue is not feasible. The only way to find out what voters are thinking is through legwork, sending political activists to conferences and meetings to gauge participants’ views.

In the final analysis, if no candidate can form a government, an inevitable third round of elections could be the most normal way in an abnormal situation of asking Israel’s Arab citizens what is to be done when faced with what for them are two horrible alternatives.