Israeli-Arab politicians warn that they will not support a Blue and White-led coalition after the elections, if party head Benny Gantz keeps supporting the Trump administration's peace plan. 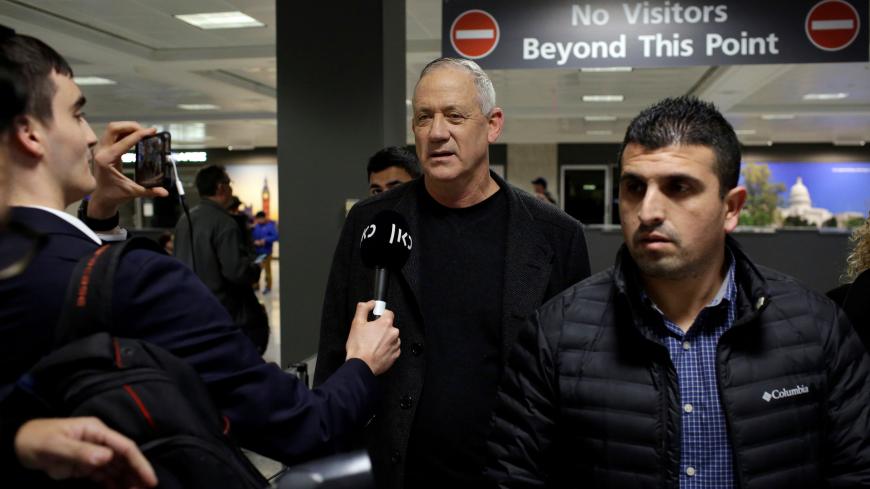 Israel's centrist party leader Benny Gantz speaks to reporters as he arrives ahead of a meeting with US President Donald Trump, Dulles International Airport, near Washington, Jan. 26, 2020.

It took time for the Blue and White party leaders to understand that Chairman Benny Gantz’s unconditional support of US President Donald Trump’s program has placed them in a Catch-22. Before the two election campaigns (April and September 2019), Gantz’s party viewed cooperation of Blue and White and the Arab Joint List as a historic opportunity for Jewish-Arab cooperation. But recent developments have turned this opportunity into a catastrophic crisis — one that might not be repaired after the elections of March 2.

In May 2019, after Attorney General Avichai Mandelblit announced his intention to indict Prime Minister Benjamin Netanyahu pending a hearing, Blue and White organized a demonstration in Tel Aviv with the participation of all the factions in the opposition, against corruption and in favor of the rule of law and democracy. Joint List Chairman Ayman Odeh expressed willingness to participate in the demonstration, and Knesset member Ofer Shelah (Blue and White) invited him to speak. The right-wing camp within Blue and White, including Knesset members Moshe Ya’alon, Yoaz Hendel and Zvi Hauser, opposed the invitation to Odeh and argued that it would thwart all options of recruiting right-wing voters in the future. True, they did not use the kind of pejorative rhetoric used by Yisrael Beitenu leader Avigdor Liberman — such as “fifth column” and “supporters of terrorism” — but they essentially transmitted the same message: "Arabs not wanted here." On the other hand, Gantz understood that he would not be able to cobble together a government without the support of the Joint List (from inside or outside). Therefore, a few hours before the demonstration, Gantz himself invited Odeh to speak. The sky didn’t fall and Gantz and Odeh agreed to political cooperation.

Meanwhile, Odeh was the object of criticism of his public for attending a demonstration of the Blue and White “chief-of-staff party” (three former Israel Defense Forces generals are part of the party’s leadership). Thus, Odeh’s answer to his detractors was to say, “The fight against Netanyahu’s corruption and his attempts to destroy democracy in order to hold onto his seat is a joint struggle of all the democratic forces — Jews and Arabs alike. Therefore, there must be representation of all the factions of the opposition. I am willing to speak against the dangers of a Netanyahu government from all possible platforms.”

After the election in September 2019, the Joint List — minus three Balad faction members — recommended to Israel’s President Reuven Rivlin that Gantz be tasked with assembling a government. Ultimately, no government was created. But it seemed that the cooperation would continue in the third election campaign as well.

On Jan. 28, Trump whipped out his “deal of the century.” A day earlier, Gantz had been invited to the White House where he was photographed with the American president and where he toed the line with the "deal." The president’s peace program is a “meaningful milestone," said Gantz, quickly adding, "Immediately after the elections, I will work to implement it in a permanent government with the coordination of the other countries in the region." Gantz expressed no reservations regarding the main problem of the president’s program: land exchange. To put it more precisely, the program mandates a transfer of the authority over Israeli-Arab citizens from the Wadi Ara and Triangle localities to the Palestinian Authority (PA). In his rush to show that he is more Netanyahu than Netanyahu himself, Gantz hurried to announce that he would bring the entire plan as is to the Knesset for authorization in one fell swoop.

Gantz did not stop for a minute to think about how this would affect him on Israel’s political map. It seems that in order to woo one mandate or half a mandate from the "soft right" to Blue and White, Gantz is willing to divorce about 1.5 million Arab citizens of Israel. These Arab citizens get the point: that Gantz is willing to toe the line with the right, and transfer Israeli cities with their Arab residents to the PA.

Meanwhile, several Blue and White Knesset members — all of them of the Yesh Atid faction within the party — hurried to express their doubts regarding the Trump deal.” Yael German tweeted Jan. 30: “I want to tell the citizens of Kafr Kera, Arara, Baqa al-Gharbia, Umm al-Fahm, Kalansua, Taibe, Kafr Qasim, Tira, Kafr Bara and Jaljulia — you are definitely Israeli citizens and we have no intentions of renouncing you.”

Shelah, who had an open channel with Joint List senior Ahmad Tibi in the course of the earlier election campaign, tweeted: “While there are many positive aspects of Trump’s plan, there is also one thing that should be ruled out immediately. Israeli citizens and localities will not transfer to the Palestinian state. Neither Kfar Saba [Jewish] nor Tira [Arab], neither Kochav Yair [Jewish] nor Taiba [Arab]. The very idea is offensive.”

On Feb. 1, thousands of people from Baqa al-Gharbia demonstrated against Trump’s plan, with the participation of Knesset members from the Joint List. “If Gantz supports the Trump plan, we won’t support him,” said Odeh to the media. Knesset member Yusuf Jibrin, an Umm al-Fahm resident who would be transferred to Palestinian sovereignty under the Trump plan, said, “We heard [Blue and White senior] Yair Lapid tell us that he does not support the transfer of Arab-Israeli villages to the future Palestinian state. But until now, we never heard what Gantz thinks about this issue — and this is of course direct criticism of him.”

“Not a word from Gantz,” Tibi told Al-Monitor. “He is trying to outflank Netanyahu from the right. He doesn’t understand that he is losing his way.” Tibi is still expecting to hear Rivlin say that he will not relinquish Israel’s Arab citizens. “I don’t suspect Rivlin [of supporting such a move]. I know that his whole outlook is against it,” Tibi noted. “But we didn’t hear from him either.”

By adopting the Trump plan unconditionally, Gantz erected a giant obstacle between Blue and White and the Joint List — and he needs the latter faction in order to make his way to the prime minister’s office. It is doubtful that he would be able to remove this rift after the elections. In fact, Trump’s transfer plan of widespread annexation has been to unite Israel’s Arab citizens against it. The Joint List hopes that this will energize the Arab voters to make their way to the voting booths in order to neutralize the “plot.” Tibi said, “According to our clear indications in the territory, the Joint List will grow and strengthen to 16 mandates. This is a realistic goal that we set [for ourselves] and is based on field work.”

If, indeed, this is what will happen, Gantz will have a very hard time establishing a government without any support at all from the Joint List. In reply to the question whether the Joint List will condition its support of Gantz, only if he will backtrack from Trump’s plan, Tibi said, “I don’t want to talk about that now.” His hint was clear: Tibi will not forget Gantz’s support of the US plan.