Leaders of the Arab Joint List qualified their recommendation of Blue and White leader Benny Gantz to compose the next government as historic — that is, until the Balad faction withdrew from the recommendation. 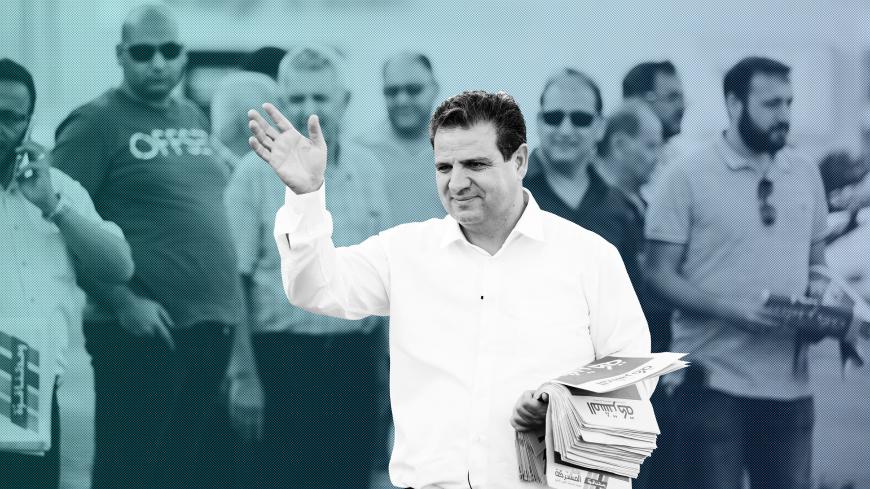 Ayman Odeh, leader of the Joint List, gestures as he hands out pamphlets during an election campaign event, Tira, Israel, Sept. 5, 2019. - REUTERS/Amir Cohen

About a week ago, the final results of the Sept. 17 elections began to pour in and the Arab Joint List achievement became known. The Joint List higher-ups were photographed as they held hands and then lifted them up as a sign of victory, to the cheers of their supporters. Joint List Chairman Ayman Odeh and Knesset member Ahmad Tibi (head of the Ta’al faction) claimed that this was a historic achievement not only by virtue of the 13 Knesset seats they received from the public but also due to the fact they had gained enough power to block Prime Minister Benjamin Netanyahu from establishing a right-wing, ultra-Orthodox majority coalition of 61 seats.

When the celebrations died down, the Joint List members began to prepare for the Day After, with the goal of leveraging their power to promote their political agenda. They had prepared a list of demands in advance, and Yedioth Ahronoth newspaper printed it at length under the headline, “Tibi’s outline for an obstructive bloc.” The Joint List’s tactic was to condition a future recommendation of Benny Gantz to be the state’s president, on a Blue and White agreement to fulfill at least part of the demands.

After the elections, Odeh and Tibi talked to Gantz and Blue and White Co-chair Yair Lapid on the phone in order to coordinate their positions toward a possible cooperation between the sides. Nevertheless, both lists understood that they might be harmed politically if they publicly open a communications channel, or even publicize their cooperation. Netanyahu, for instance, would under no circumstances squander the opportunity to attack Blue and White for cooperating with the “Arabs.” And indeed, after the Joint List recommended Gantz for the premiership, Netanyahu did attack: “This happened exactly as we warned.”

Recommending Gantz to President Reuven Rivlin for the task of forming the next government was not an easy step for the Joint List. At first its members were in no hurry, but the growing pressure from the list’s activists and constituents sent them to convene on Saturday, Sept. 21, in Kafr Qassem. There they made the decision to waive the “calculated tactics” of avoiding to recommend anyone in the first round of consultations. Instead, they would realize the will of their constituents, and recommend Gantz in their meeting with the president. Any other decision would have sparked much anger with most of the Arab public.

After they gave their recommendation on Sunday night, the inevitable happened: The "glue" uniting the four parties that comprise the Joint List was not strong enough for dramatic and historic processes. Evidently, they knew that this may happen, but preferred to repress it. In any case, the Joint List’s weak spot — the Balad party — refused to recommend the “General’s Party” as they call Blue and White. (Three of the party’s seniors are former Israel Defense Forces generals.) True, there are no other alternatives to Netanyahu and Gantz, but that did not interest Balad Chairman Mtanes Shehadeh. The way he sees it, he has his own voters to placate.

At the meeting Kafr Qassem, it had been decided that a decision would be made according to a majority vote. Thus, despite Balad’s opposition, the recommendation to the president obligates the entire list. In other words, all 13 Joint List elected recommend Gantz. Odeh even published an article in the New York Times Sept. 22 in which he described the emotions of that historic moment among Israeli Arabs, who, he wrote, want to integrate into Israeli society as equals. And then he received a phone call from Knesset member Shehadeh who demanded that he call the president's house and remove the names of the three Balad members from the Gantz recommendation list. (Shehadeh ordered Tibi to do the same thing.) Both Odeh and Tibi refused; after all, they had agreed that any decision accepted by the majority would commit everyone on the list.

But the Balad chairman insisted. Former Balad Chairman Jamal Zahalka, and former Balad Knesset member Haneen Zoabi, were making his life miserable. It turned out that all the talk in the Arab sector regarding the change of personnel in Balad as having a moderating effect in the faction evidently was baseless. Balad still cleaves to a political agenda that clashes with the Joint List’s basic principles, and their three Knesset members on the Joint List have no problem in diverting the entire list from its track.

These cracks in the Joint List are fundamental ones; we are not talking about procedural/political issues regarding the order of representatives on the Knesset list or the balance of power within the list, but weighty ideological issues. On the one hand is the desire to integrate Israeli society, which is expressed by three-quarters of the list members — Hadash, Ta’al and Ra’am — and on the other hand is Balad’s militant strategy known as “the state of all its citizens.”

In a conversation with Al-Monitor, Tibi said, “I was forced to write a letter that neither I nor Ayman Odeh wanted to write.” Tibi sounded angry and under pressure; evidently, he understands that the Joint List does not really exist anymore and the ideological struggle within it has started. Will it constitute an obstructive bloc, or support a center-left government? Or perhaps continue to sit on the fence? One way or the other, its voters will be forced to pay the price of isolation.

If Gantz will, indeed, succeed in assembling a center-left government with the Joint List representatives constituting an active support bloc, will only three-quarters of the Joint List support it? And what about the fate of the “list of demands” they prepared as their stipulation for supporting a government that is not an extreme right-wing entity?

In other words, is the Joint List falling apart only a week after its electoral historic achievement?

And that's not even the end of the drama. The Blue and White people feel, after weighing their tactical considerations that Gantz would actually have a greater chance of assembling a government if Netanyahu receives the mandate first from the president, and fails. In that case, Gantz would be tasked with the mission. Therefore, the subtraction of the Balad members from the list of advocates led to a wave of rumors regarding coordination with Blue and White. In other words, without Balad, Gantz has only 54 backers vis-a-vis Netanyahu’s 55. With Balad, Gantz has 57 mandates.

Although a political source told Al-Monitor that the sides are talking to one another and that “productive ideas are being raised,” Tibi denies this strenuously. “These are incorrect, nasty rumors designed to harm us,” he said.

According to Tibi, the very idea of giving preference to Netanyahu in assembling a government before Gantz lacks all political sense. Tibi said that if Netanyahu is given preference, Blue and White will lose the rights — as the largest faction — to determine the order of Knesset committees and to pass laws at the very beginning of the tenure of the 22nd Knesset. Even more important, Blue and White will lose its momentum in Israeli public opinion as the winner of the elections.

The problems facing the Joint List are, to a certain extent, similar to those of Blue and White. The cracks that have already opened in the Joint List between all its components, serves to lower their bargaining power. The joy over the historic achievement was quickly replaced by concern over the unity of the Joint List.