After the March 2 elections, Blue and White leader Benny Gantz will have to make a choice between Avigdor Liberman’s Yisrael Beitenu party and the Arab Joint List. 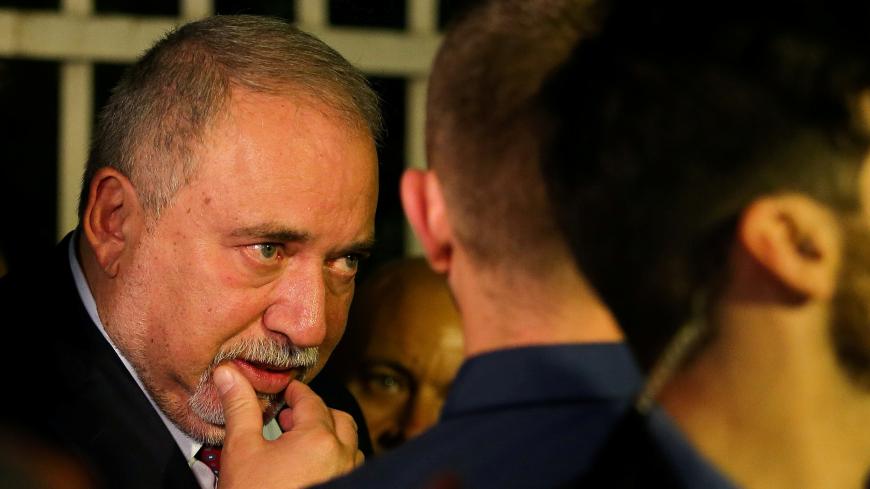 Avigdor Liberman, the hawkish chair of the Yisrael Beitenu party, is changing direction. In a Feb. 4 interview with the Ynet news site, he proclaimed with complete certainty, “I know there won't be a unity government, but a Zionist and liberal government."

When Prime Minister Benjamin Netanyahu and his rival, Blue and White party Chair Benny Gantz, were trying, each to no avail, to form a government following the September 2019 elections, Liberman was the one who insisted he would not join either one of them unless they formed a unity government. He even presented a four-stage plan for such a coalition government, which would entail forming a team of Likud, Blue and White and Yisrael Beitenu representatives to formulate guidelines on defense, economic and social issues, and on the issue closest to his heart — relations between state and religion. Other parties, according to his blueprint, could join the trilateral coalition only if they adopted the agreed guidelines. Presumably, the guidelines that Liberman meant to stipulate would have left the ultra-Orthodox, Arab and hard right parties (except for the Likud) out of the unity government. After all, he has been waging almost daily war against all of them. Liberman even generously declared over and over that he is fine with staying out of a unity government if the Likud and Blue and White decide to go it together, without any others.

In the ensuing months, Liberman’s circumstances have changed. Netanyahu withdrew his request for Knesset immunity from prosecution and the bribery indictment against him was filed Jan. 28 in the Jerusalem District Court. Liberman’s already hostile relationship with Netanyahu has deteriorated further, and US President Donald Trump unveiled his “deal of the century” for Israeli-Palestinian peace, which pulled the rug out from under one of Liberman’s main agenda items — “exchanging lands and populations of Israeli Arabs,” as set out in his party’s “vision.” His party’s 2015 election campaign slogan was, “Ariel for Israel, Umm al-Fahm for Palestine” (in reference to the West Bank settlement town of Ariel and the Arab-Israeli town of Umm al-Fahm).

Two points are worth noting in Liberman’s 2015 slogan. One is that he spoke of Palestine, meaning the establishment of a Palestinian state alongside Israel. The second noteworthy point was his mention of Umm al-Fahm and other towns and villages in the Wadi Ara region as if no Israelis lived there. At the time, it sounded like an absurd, radical plan of a desperate politician, but to his surprise, and perhaps amazement, Netanyahu “stole” his land swap idea. Haaretz reported Feb. 4 that back in 2017, Netanyahu proposed to senior Trump administration officials that they include the transfer of Arab residents from the so-called Triangle region of central Israel to Palestinian control as part of the deal of the century. That proposal would have included even more citizens and towns and villages than the one Liberman originally envisioned.

If Liberman sticks to his newly adopted position ruling out a unity government, he will probably be the one who “crowns” Gantz prime minister after the March 2 elections. After the September voting, Liberman rejected a request to support a minority government led by Gantz. Now that Liberman is “certain” a unity government will not be formed, and given his barely veiled enmity for Netanyahu, the foregone conclusion is that Liberman plans to support Gantz as leader of a coalition government comprised of parties he defines “Zionist and liberal." And in a Feb. 5 radio interview, the hawkish politician did not rule out partnership in a government comprised, inter alia, of the left-wing, Zionist Meretz party.

The Arab Joint List is still waiting for Gantz to disavow the Trump plan, or at least the chapter that discusses the population transfer option. Party sources told Al-Monitor that Gantz’s thundering and disappointing silence on this issue prove that Gantz and Liberman are in cahoots. A party source, speaking on condition of anonymity, said he does not have concrete evidence of any deal between Blue and White and Yisrael Beitenu, but the Joint List believes Gantz has adopted a strategic decision to prefer Liberman to the alliance of Arab parties in order to obtain his support for forming a government after the elections.

Indeed, that is how it looks. Gantz expressed support for the Trump plan unveiled Jan. 28 and even promised to bring it to the Knesset for approval. As I wrote here previously, the Joint List was quick to threaten it would withdraw its support for Gantz, would not recommend to the president that he be tasked with forming Israel’s next government and would not even support a Gantz-led government in Knesset votes — but Gantz did not address the transfer issue. He maintained his silence even in the face of protests from some in his party — Knesset members Yair Lapid, Yael German and Ofer Shelah — creating the impression that he had decided to abandon residents of the Triangle and Wadi Ara, so that he would be able to form a government with Liberman but without the Joint Arab List.

Gantz is obviously aware of the latest polls. The heads of the Joint List believe, based on their impressions of the campaign trail, that they will surprise everyone and improve their showing in March, getting 15 or even 16 seats in the next Knesset (compared with 13 in September 2019). Even if it only maintains its current support, Gantz’s silence on such a germane issue is an admission that he is giving up the support of Israel’s Arab parties in favor of Liberman’s.

Thus, even before the first vote has been cast in Israel’s third round of elections within less than a year, Liberman is once again the man holding the keys to the establishment of Israel’s next government and to the identity of Israel’s next prime minister. Gantz is wrong if he believes he can wait until after the elections to voice his reservations about the deal of the century and then reconcile with the Arab Joint List and things will work out. By then, he may even have lost potential voters, supporters of the political center and left, who refuse to vote for an advocate of transferring the country’s Arab citizens to another state.