The Israeli assassination of an Islamic Jihad leader and the killing of 32 Palestinians, including women and children, has ended any possibility of engagement by the Arab Joint List with Blue and White party leader Benny Gantz. 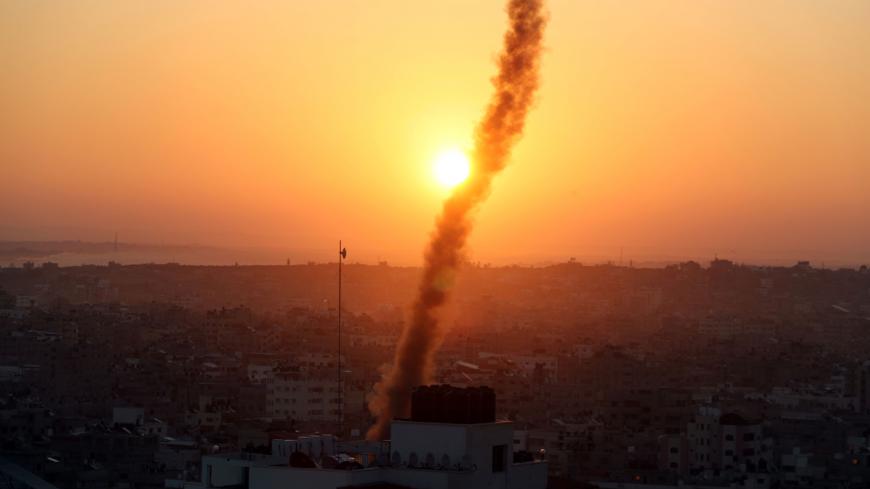 A trail of smoke can be seen as rockets are fired from Gaza toward Israel during sunrise, in Gaza, Nov. 12, 2019. - REUTERS/Mohammed Salem

The possibility that the Arab Joint list will play some role in helping Benny Gantz, head of the Blue and White party, create a minority government has all but ended with the latest strikes on the Gaza Strip and Gantz’s public support for the attacks.

Johnny Mansour, a Haifa-based historian and political science lecturer at Beit Berl College in Israel, told Al-Monitor talks between the Joint List and Gantz are over. “It is clear that these talks are over — while the discussion was never about joining the coalition but supporting it from outside with the aim of pushing [Benjamin] Netanyahu out [of coalition talks]. However, Netanyahu superseded this possibility by his attack on Gaza and forced Gantz’s hand by having the former chief of staff support the attacks on Gaza.”

Mansour concluded the result is clear: “Gantz is much closer to Netanyahu than he is to the Joint List.”

The Joint List is made up of four parties: Hadash, headed by Ayman Odeh; the Arab Movement for Change, headed by Ahmad Tibi; Ra'am, headed by Mansour Abbas; and Balad, headed by Mtanes Shehadeh.

While 10 out of the 13 elected members of the Joint List had recommended to Israel’s president that Gantz form the next government, the three Balad members of Knesset were opposed — which is why Netanyahu was given the first offer to try and form a coalition government, and he failed.

Uri Dromi, former head of the Israeli government press office and director general of the Jerusalem Press Club, told Al-Monitor the Gaza round didn't help. Dromi, however, insisted the “support” of Gantz by the Joint List was lukewarm to start with. He said, “The support from the Joint List was emanating more from the hate of Bibi [Netanyahu] rather than the embracing of Gantz who, as chief of staff of the IDF, commanded a bigger onslaught on Gaza than the current one.”

Dromi doesn’t believe the rapprochement with Gantz is dead; instead, he believes the pragmatic approach of the Joint List is influenced by pressure from their base to move away from trumpeting the Palestinian national causes toward integrating into Jewish Israeli society. “Gantz, therefore, seems like the lesser evil, and I assess that they will continue supporting him while voicing their bitterness over Gaza,” said Dromi.

Although they didn’t comment about coalition talks — and attempts to seek their response on the issue by Al-Monitor were not responded to — Joint List Knesset members were very vocal in their opposition to the attacks on Gaza.

Odeh, head of the Joint List who was chosen as one of Time Magazine’s top 100 rising stars, attacked Netanyahu when he tweeted Nov. 12 that the Israeli prime minister is acting in his own personal interest. “A cynical man who lost two consecutive elections will leave only scorched earth in a desperate attempt to remain in office,” Odeh tweeted, adding, “For 10 years, he has risen every morning with the aim of deepening the occupation [of the West Bank] and distancing the chances for peace."

Joint List members participated in a Tel Aviv protest rally Nov. 12 calling for peace between Arabs and Israelis. Aida Touma Suleiman, a Knesset member from the Hadash Party, called on Israelis not to believe what Netanyahu says. “Don't let Netanyahu mislead you; he doesn't want good for you. He only wants security for his position as prime minister,” Touma Suleiman said during the protest rally, calling those who rushed to back the assassination of the Palestinian leader sheep.

Speaking at the Knesset Nov. 14, Netanyahu accused members of the Joint List of encouraging terrorism. Tibi responded, “You are lying and inciting against us.” Knesset Speaker Yuli Edelstein subsequently sent Tibi out of the chamber, and Joint List members exited the plenum hall in protest and solidarity with Tibi.

While the attack by Netanyahu on Gaza appears to have been largely influenced by his own political demise, the fact is that the action in Gaza forced Gantz’s hand — he had no political choice but to publicly coordinate with Netanyahu and publicly endorse the Gaza strike. By doing so, Gantz pushed himself away from any potential cooperation with the Arab Joint List and forced himself to find a coalition solution with Avigdor Liberman or Netanyahu.