Palestinian citizens of Israel made a huge accomplishment in the latest Israel elections by winning an unprecedented 15 seats. 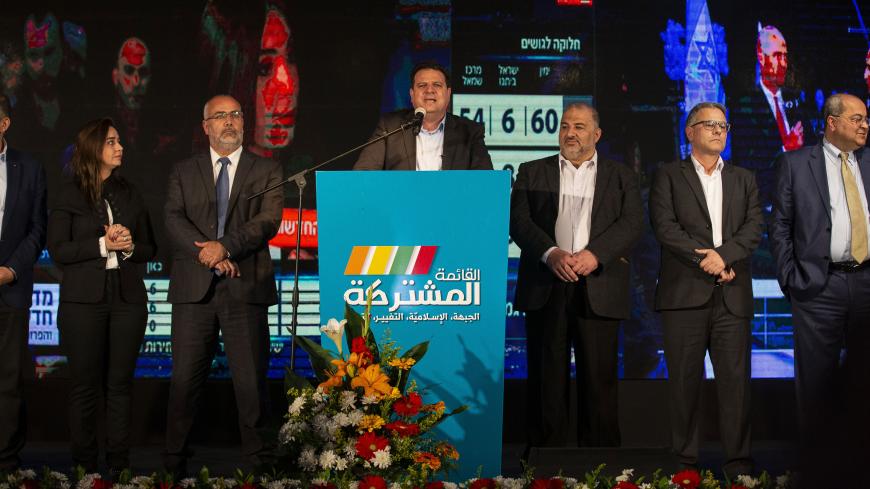 Ayman Odeh speaks while flanked by other members of the Joint List, Shefa-Amr, Israel, March 2, 2020,

Palestinian citizens in Israel made a powerful statement in the March 2 elections, with the Arab Joint List winning an unprecedented 15 seats in the 120-member Knesset. The alliance consists of Hadash (Democratic Front for Peace and Equality), headed by Ayman Odeh; the Arab Movement for Change, led by Ahmad Tibi; the Islamic Movement, headed by Abbas Mansour; and the nationalist Balad, led by Mtanes Shehadeh. The 64.7% of Palestinian voters who turned out cast their ballots almost exclusively for the Joint List, thus thwarting the hopes of the current Israeli caretaker prime minister, Benjamin Netanyahu, to form a majority coalition government of 61 members.

Fadi Elsalameen, adjunct senior fellow at the Washington, DC-based American Security Project, told Al-Monitor that the results of the elections stand as a huge success for Palestinian citizens in Israel. “This success not only blocks Netanyahu from forming a government, but also ends the right-wing agenda of excluding Palestinian Arabs from having a place in Israeli politics,” Elsalameen said.

Elsalameen, a Palestinian himself, added that even before election day, “The success became evident in Netanyahu’s last-minute attempt to peel off some of these votes for himself, or at least to cause them to stay at home, as evident in his last-minute attempt to arrange direct pilgrimage trips to Mecca and his public claims that the idea of population change was a bad idea.”

US President Donald Trump’s peace plan, which many believe was largely inspired by ideas from Netanyahu, includes the shifting of borders to move 250,000 Palestinian citizens of Israel to the theoretical and powerless Palestinian state. This provision, tucked away on page 13 of the 181-page Peace to Prosperity plan, is said to have increased Arab turnout in the election.

Smadar Perry, a veteran reporter for Yedioth Ahronoth, pointed to two factors contributing to the Joint List winning 15 seats. She remarked to Al-Monitor, “[First,] there was no Arab candidate in any other party, which was a huge mistake as far as I can see, and second … is the high turnout the list leaders and supporters accomplished.”

Perry applauded the Joint List’s leaders, saying they worked hard ahead of the elections. “Only the Arabs and Likud were working in this election cycle,” she said. In the elections held in April of last year, Arab parties ran separately and together won a total of 10 seats. In September, the parties reunited to take 13 seats.

Johnny Mansour, a Haifa-based historian and political science lecturer at the Academic College in Beit Berl, in Israel, told Al-Monitor that the leaders of the Joint List did well, but that their opponents are trying to deny the importance of the outcome. “The results have produced multiple negative voices from other parties aligned with [Blue and White leader Benny] Gantz, including some in his own party who don’t want to see the Arabs associated with any government, even accusing some of those elected, specifically the Tajamu [Balad] party, of being terrorists.”

Mansour praised the maturity of the Joint List's leaders, who will make serious demands on behalf of their constituents. “Their participation in the negotiations [toward support for a new coalition government], with a representative from all four elements of the list, is a major achievement compared to the past, when they were shunned in a reflection of the general denial of Palestinian nationalism,” he said.

According to Mansour, leaders have to mix direct demands and ideological ones in such political negotiations. “For example, they can request an end to house demolitions, demand recognition of Bedouin communities in the Negev, but at the same time, they can insist on rescinding a number of recently passed racist laws that discriminate against Arabs and demand that the new government doesn’t follow through on the Trump plan. The larger parties often respond to specific issues but are reluctant to give in to some of the ideological and political demands,” Mansour explained.

The high turnout among Palestinians that lead to the Joint List's unprecedented 15 seats in the 23rd Israeli Knesset also marks another precedent. Eman Khatib, the Islamic Movement candidate who occupied the 15th position on the Joint List's slate, will break new ground when she enters the Knesset. Khatib, a mother of four who holds a master’s degree from Tel Aviv University in women’s studies, will become the first hijab-wearing woman to enter the Knesset.

Khatib told Al-Monitor that her priorities will be to serve her community. “I have made commitments to the voters to work hard in representing them and fighting for their rights,” she said. As for her precedent-setting hijab, Khatib said she is used to the expected negative reaction. “I have faced up to this kind of reaction all my life, including while studying at Tel Aviv University, and it doesn’t faze me,” she remarked.

After election results were confirmed, Khatib posted a video on Facebook thanking her voters. “Your trust is valuable to me, and we will try to carry this responsibility wherever we go, and we will be honest representatives of your aspirations and rights.”

Israel's March elections, the third in less than a year, have altered the country's political landscape. The record number of Knesset seats representing Palestinian citizens appears to be just enough to help create a blocking majority that could push the right-wing, corruption-indicted Israeli prime minister from office. Such success will not go unnoticed.