Why was Arab voter turnout so low in Israel’s elections?

Palestinian voter turnout in Israeli elections is dropping, as is the number of Arab representatives in the Knesset. 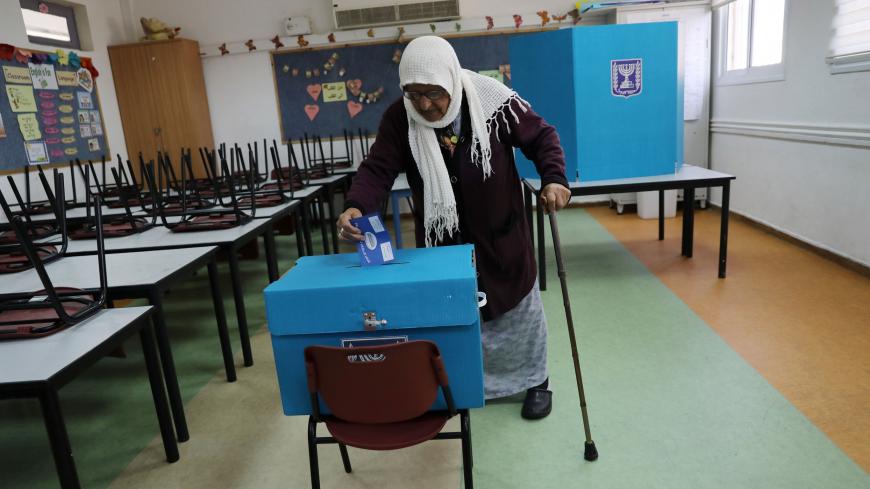 An Israeli Arab woman casts her ballot as Israelis began voting in a parliamentary election, at a polling station in Haifa, Israel, April 9, 2019. - REUTERS/Ammar Awad

Palestinian voter turnout in Israeli elections has dropped substantially in recent years, prompting Palestinian leaders in Israel to call the reduction an “emergency situation.” Voter turnout stood at 50% this year, a 13% drop from 63% in 2015. The reduced turnout has led to a loss of three Knesset seats since 2015, from 13 to 10 out of a total 120 seats.

The low turnout in the April 9 elections is a reflection of the desperation and lack of faith among Arab citizens in Israel toward the political system, which has ignored them and passed laws that discriminate against non-Jewish residents.

Botrus Mansour, director general of the Nazareth Baptist School, told Al-Monitor that even though Palestinian citizens have done well economically and their legislators have performed solidly in the Knesset, those factors have failed to boost turnout. “Nazareth had the biggest drop in voting," he said of the largest Arab city in Israel. "While some intellectuals boycotted [the elections] on an ideological basis, most stayed away out of apathy and desperation.”

Mansour blames political marginalization for the low turnout. “The marginalization of Arabs and their lack of influence, despite their abilities, is a major reason for this feeling of desperation,” he said.

Jamal Zakout, a leader of the first intifada and an adviser to former Palestinian Prime Minister Salam Fayyad, told Al-Monitor that Palestinian nationalism has receded in general and been replaced by a desire to address daily issues. “Palestinians in the 1948 areas [Israel] have chosen to prioritize daily life issues over the national issues," he said. "People didn’t care about the national issues despite the [Jewish] nationality law, which clearly discriminates against them.”

Zakout also argued that “the division and the split of the Joint List" affected voters.

The other list combined the United Arab List (Ra’am) — which includes the Islamic Movement’s Southern Branch and is headed by Mansour Abbas — with the National Democratic Assembly (Balad), headed by Mtanses Shehadeh. This list won four seats.

Anton Shalhat, a respected Israeli affairs analyst with the Madar Center, agreed that the pre-election divisions — which led to the split of the single Joint List into two lists — negatively affected the Arab electorate. “There was disappointment in the split of the Joint List and the 'horse trading' that left many feeling that the leaders of the parties were more concerned about themselves than serving their community,” Shalhat told the Haifa-based Arab48 news on April 11.

Bader Mansour, the founder and president of the Nazareth-based Nazdaq software company, told Al-Monitor that the Palestinian citizens of Israel are in the midst of an identity crisis that has become clearer in this election. “The struggle for identity of Arabs in Israel was accelerated by the incitement against them by [Benjamin] Netanyahu, while [Benny] Gantz totally ignored them," he said. "This has left many feeling marginalized and lacking any desire to be represented in the Israeli parliament.”

Zaha Hassan, a researcher at the Carnegie Endowment for International Peace, said in an April 11 interview with Carnegie’s Gulf-based Diwan site that Palestinian citizens of Israel were of two minds on the election. “Many of them believed that it would legitimize a government that had effectively told them that they were not part of Israeli society," she said. "This is the message they got from the passage of the Jewish Nation State Basic Law, which defines Israel as a Jewish state and affirms that only Jews are entitled to self-determination in the country.”

Haasan, however, said that “other Palestinian citizens of Israel" believed "it was important to participate in elections, as flawed as they were — for example, parties calling for equality between Jews and non-Jews are banned.”

Israel’s Arab population of the Druze faith participated in the election and voted for the left-wing Meretz party. Haaretz ran a headline April 11 stating: “How Israeli Arab Voters Saved Meretz.” The article stated that the Druze voted for Meretz as “payback” for the Jewish nationality law that discriminated against non-Jews, including the Druze who serve in the Israeli army.

The low turnout pushed many leaders and thinkers to ask: Where do we go from here? Awad Abdel Fattah, the former secretary-general of the Balad party — which barely passed the 3.25% threshold — said on his Facebook page that a “serious review is needed.”

Abdel Fattah called for a change in leadership. “The key question is who will take on this review and the mission of forging ahead a new way with renewed national ethos," he said. "Certainly not the failed leaders who have been holding on to their leadership positions for over two decades.”

Palestinian citizens of Israel, who constitute 20.9% of the overall 8.8 million citizens of Israel, will have 8% of Knesset representation (10 out of 120). But this imbalance changes drastically when you compare overall Jewish and Palestinian populations between the Jordan River and the Mediterranean. Reuters reported in March 2018 that parity between the two ethnic groups was reached, leaving the long-term choices of the leaders of both communities very clear.

The choices are sharing the land or sharing the power. The low turnout and the drop in Arab representation in the Israeli Knesset, along with the rise of serious talk about annexing parts of the West Bank, will create an even further shift in the aspirations of Palestinians on both sides of the green line, separating Israel from the occupied territories, away from the two-state solution and toward the one-state solution with equal rights for all citizens.