Palestinian citizens in Israel expect to get 15 seats in Knesset

Israel's Palestinian citizens are expecting to expand their number of seats in the next Israeli Knesset due in part to their united position in the Arab Joint List. 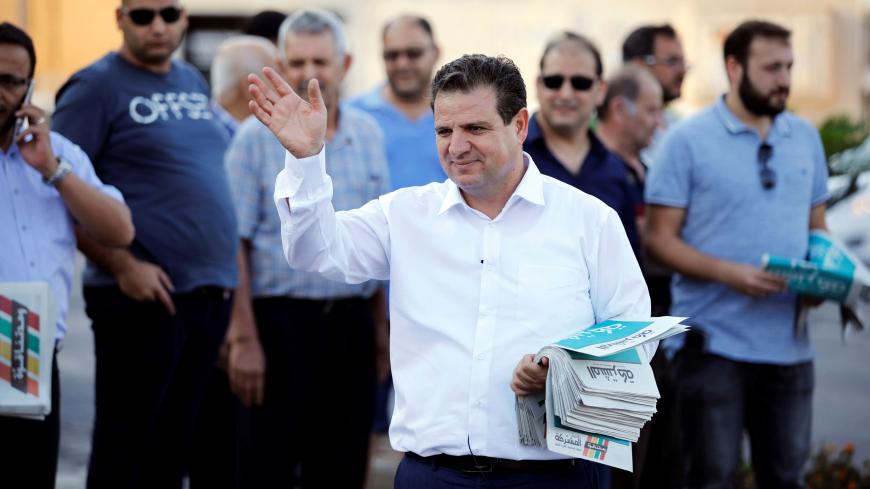 Ayman Odeh, leader of the Joint List, gestures as he hands out pamphlets during an an election campaign event in Tira, northern Israel, Sept. 5, 2019. - REUTERS/Amir Cohen

Palestinian citizens in Israel expect to see an increase in their number of Knesset seats in the third election cycle in less than one year in Israel. Days before the window is set to close for submitting election lists, due Jan. 17, polls show it is possible the Joint List — a unified slate of predominantly Arab parties — could garner as many as 15 members in the March 2 elections, a whopping 50% improvement over the results of the April 2019 elections when the Joint List was split and only able to reach 10 seats. When Arabs united in the September 2019 elections, they gained 13 seats.

Botrus Mansour, a Nazareth-based lawyer and an astute observer of Arab voting trends in Israel, told Al-Monitor the Joint List will improve because of its stability, lack of internal squabble this time around and proven ability to influence politics in Israel. He said, “For years, Palestinian citizens of Israel felt their representatives in the Knesset had no influence. But when Ayman Odeh, head of the Joint List, recommended to President Reuven Rivlin that Knesset member Benny Gantz become prime minister, this drove home to many that Arabs can, in fact, have influence.” Mansour’s comment reflects the fact that previously, Arab members of the Knesset had not nominated anyone for prime minister.

Ziad Omari, a well-to-do businessman and the new owner of Radio Nas, a licensed Arabic language radio station broadcasting out of Nazareth, told Al-Monitor there are many reasons why people are more hopeful regarding the upcoming elections. “Arabs are more hopeful that as a result of the newly found power, Arab Knesset members can be part of the effort to finally remove the longest-serving prime minister of Israel and his right-wing partners,” Omari said.

Omari noted that Arab legislatures in Israel could very well benefit from some of the new alignments among Zionist parties. “The unity between the left-wing Meretz Party and the Labor Party will most likely free many citizens to vote for the Joint Arab List,” he said.

The merge between the two parties meant that Meretz member Issawi Freij ended up in the hard to reach the spot of 11th on the list. The latest polls don’t expect the Meretz-Labor coalition to reach more than 10 seats.

Omari is hoping his radio station and other media outlets will be successful in getting the vote out in Arab communities so as to reach this latest goal. “Unfortunately, the incitement against Arabs continues, and therefore we at Radio Nas will have a role to fight against the racist incitement by Benjamin Netanyahu and the right wing by encouraging our people to vote. This is a national and democratic right, and every citizen must take advantage of it,” Omari said.

In March 2019, only 49.2% of Israel’s Palestinian Arab voters participated. The percentage went up considerably in September 2019 to nearly 60%. But if the goal of the Joint List is to reach 14 or 15 seats, they need to come close or even match the turnout of Jewish voters. Israeli Jewish participation in the September 2019 elections of the 22nd Knesset reached nearly 70% — up from 68% in the March 2019 elections.

Omari said he is generally happy with the roster of candidates in the upcoming elections, and he had special praise for the head of the Joint List. “Ayman Odeh is honest and serious about his work, and he has a vision for the future. If we succeed in the coming elections, Arabs can be part of a coalition that will block any right-wing extremist government from being formed,” said Omari.

If Palestinian turnout is high and the Joint List can reach a record 15 seats in the 23rd Israeli Knesset, this result will also mark a precedent. Iman Khatib Yassin, nominated by the Islamic Movement in Israel (one of the four coalition partners) and who stands at the 15th slot, could become a unique member of the Israeli Knesset. Khatib, a mother of four from the Galilee village of Yafa of Nazareth, holds a master’s degree from Tel Aviv University in women’s studies. If the Joint List wins 15 seats, she will become the first hijab-wearing woman to enter the Israeli Knesset. She told Al-Monitor that she is not concerned about harrasment over her head dress. "I have heard criticism in previous elections and that doesn't bother me, I believe in what I do and I am not doing anything against my faith or against morals."

While the Palestinian leadership in Ramallah has carefully stayed out of Israeli politics during election cycles, President Mahmoud Abbas urged Palestinian citizens of Israel to participate in the upcoming elections, saying they can “have a major influence.”

While the third elections in less than a year are not expected to produce any major changes in the electoral map, it is possible that an increased turnout could provide a record number of Knesset seats to Palestinian citizens of Israel, and that could — depending on the rest of the voting patterns — be just enough to help create a blocking majority that can finally make it possible to push the indicted Israeli prime minister out of his current office.