Will Arabs in Israel revive Joint List for new elections?

Palestinian citizens in Israel lost three seats in the April 10 elections due in large part to the low turnout, which came as a result of apathy and unhappiness about the fact that the united list was divided into two. 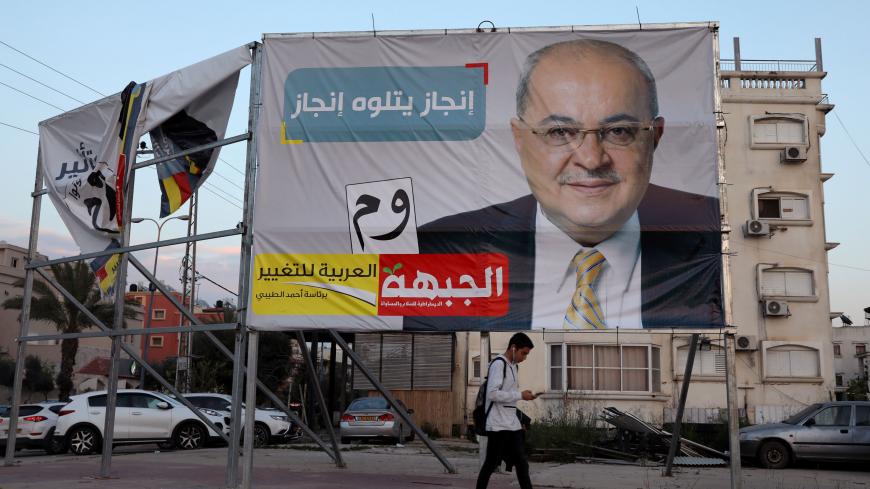 A youth walks past an election campaign banner depicting Ahmad Tibi of Hadash-Ta'al in the Israeli Arab village of Taibe, April 3, 2019. - REUTERS/Ammar Awad

No sooner had the new Israeli Knesset voted on May 30 to dissolve itself and hold new elections in September than calls began among Israel’s Palestinian citizens to revisit reviving the united Joint List, which had won 13 seats in the 2015 elections, compared to the 10 seats won by Arab parties in this year's April 9 elections.

Turnout for the Arab parties in April stood at 49%, compared to 63% in 2015. The united list of Hadash (Democratic Front for Peace and Equality) and Ta’al, led by Ahmad Tibi, won six seats, and the combined list of the Islamist Ra'am (United Arab List) and Balad (Tajamu) barely crossed the Knesset threshold of four mandates.

Jafar Farah, director of the Haifa-based Mossawa Center, which promotes equality for Palestinian citizens of Israel, and a leading member of Hadash, told Al-Monitor, “The united Arab list will return for sure. There are now discussions of names of who should be on the lists because in the April elections, Palestinians in the Negev were not represented, and there is a need for changes among some of the nominees for the Islamic and the Balad components. Both [Balad and the Islamists] performed poorly in April.”

According to Farah, “[The Southern Branch of the Islamic Movement will] likely hold new primaries to determine its list members now that the head of its list, Mansour Abbas, has resigned as head of the Islamic list.”

Mansour Dahamsheh, secretary-general of Hadash, told the Arabs48 news website, “The most important lesson is that unity brings better results, and we need to work on composing a unified list as the best political response to far right-wing policies and the incitement against Arabs by [Prime Minister Benjamin] Netanyahu and [the right-wing secularist Avigdor] Liberman.”

Dahamsheh believes the new list must be open to all sectors of Arab society in order to succeed, but two stumbling blocks might hinder the effort to unite as a single list: concerns about the list becoming too close to Zionist parties and the eventual candidates.

Botrus Mansour, a lawyer and head of the Baptist School in Nazareth, told Al-Monitor that a focus of negotiations will be Ayman Odeh, head of the Hadash-Ta'al list, having delivered a speech on May 25 at an anti-Netanyahu rally organized by Netanyahu's rivals from the Blue and White. At the rally, Odeh had called for Arab-Jewish unity, for peace and for rejecting the immunity law that Netanyahu has been pushing to protect himself from possible indictment on charges of corruption.

“We Arab citizens may not be able to do it alone, but without us, it is impossible,” Odeh said. “This struggle is intertwined with peace, equality, social justice. It demands partnership between courageous leaders. I am willing [to have] such a partnership in order to bring about change.”

Awad Abdel Fattah, former secretary of Balad, expects the right wing to continue to dominate Israeli politics. He told Al-Monitor, “The Blue and White coalition, made up of Israeli generals, was created to save Israel from itself, and therefore, the opposite of Netanyahu is also a hard-line Zionist alternative.”

Agreeing with one of Mansour's sentiments, Abdel Fattah also stated, “[Any attempt to] cooperate with the war criminal generals will bring failure to attempts at unity of Palestinians in Israel.”

A coordinator of the One Democratic State Campaign, Abdel Fattah believes that it will take a long time to achieve equality for all citizens, but also adds, “But we need to start.” He told Al-Monitor, “The one-state vision will take decades [to be achieved], but we need to begin by setting a strategy and not wasting our time on short-term tactics.”

One of the least discussed issues in the April elections was the campaign by some to boycott elections altogether. Although the movement has no name or formal organization, it appears to have found many supporters.

Adnan Tarabsheh, a stage actor from the Galilee village of Mughar and campaign activist, told Al-Monitor that the campaign will escalate its calls for boycotting the September elections, which he asserted “justify continued rule by a system that has no respect for Palestinian rights.”

Palestinian citizens of Israel will most likely unite to run on a single list, which will probably match the record of 13 mandates, 11% of the Knesset’s 120 seats, from the 2015 elections. This would still fall short in terms of matching Arab representation within the population, which stands at 20%. It is unlikely that even the goal of 13 seats will make a difference in the postelection exercise of building a governing coalition, which will most likely involve negotiations between right-wing and ultra-Orthodox Jewish parties. A united front is nonetheless important for preserving the standing of Palestinian citizens in Israel as they demand peace and equality.