There appears to be a good chance that the Joint List will not be the only party vying to represent the interests of Palestinian citizens of Israel in April elections for the next Knesset. 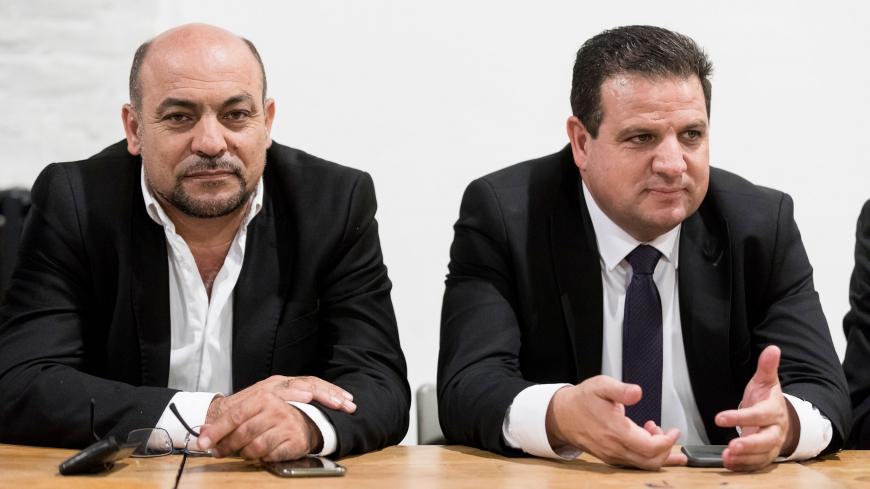 Palestinian citizens of Israel are expected to send an entirely different set of politicians to the Knesset in the upcoming parliamentary elections, due to take place April 9. They are currently represented by the Joint List, led by Ayman Odeh, with one Jewish and 12 Arab Knesset members. Political observers estimate that at least two, and possibly three, Arab lists will be announced before the deadline to register at the end of February.

One new party likely to participate is Arab Home. According to a Dec. 31 press release by the attorney Ayman Abu Rayya, the party's founder, Arab Home would join the governing coalition no matter who heads this coalition. No Arab party or list has ever been invited to join an Israeli government in the state's 70 years of existence.

As for the Joint List, it is not clear whether the current party lineup will be the one presented to voters in the April balloting. While internal rules dictate a rotation of many of the representatives of the main parties of the Joint List, it is also unclear whether the list itself, which was voted into the Knesset by an overwhelming majority of Palestinian citizens of Israel in 2015, will survive. The Joint List currently consists of Hadash (the Democratic Front for Peace and Equality), Balad (Al-Tajamu), the Islamic Movement and the Arab Movement for Renewal, led by Ahmad Tibi.

Al-Monitor has learned that Tibi, one of the more popular members of the current list, is holding serious negotiations to establish a separate list in collaboration with Nazareth Mayor Ali Salam, who was re-elected with 63% of the vote in municipal elections held in October. Palestinian sources in Israel told Al-Monitor that a Tibi-Salam list might attract the Islamist vote, creating formidable competition for the Joint List.

Jafar Farah, director of the human rights organization Mossawa and a possible Hadash candidate, told Al-Monitor that the various parties will all have major changes in their candidate lists not only because of internal rules of rotation, but also because of the difficulty most candidates will likely have in obtaining the two-thirds, or 60%, of the vote for a spot on the lists. Farah noted some of the upcoming changes.

“From al-Tajamu, Jamal Zahalka has announced that he will not run, and Haneen Zoubi will have a hard time getting 60% of the votes,” Farah said. “Dov Hanin, the only Jewish member of the Joint Arab List, will not be running, and the Islamic Movement [southern branch] will be presenting Mansour Abbas as its top candidate for the Knesset.”

Farah is not too concerned about splitting the Joint List, which had been hailed as a major achievement for the 20th Knesset. “If they can pass the minimum threshold, two lists competing against each other might raise the level of participation among Palestinian citizens of Israel,” Farah said. Parties must win at least 3.25% of the vote to enter the Knesset.

He further noted, “In the last election, 63.5% of Arabs voted, and they overwhelmingly voted for the Joint Arab List, sending 13 members to the Knesset. If there is only a single list, the number of Knesset members might drop to 11 or 12 because of voter apathy, however, if there are two lists competing for votes, this could raise the percentage of Arabs voting in the elections and can yield 13 or even 14 Knesset members.”

The possibility of a new Arab party or list making it to the Knesset is seen by many, including Farah, as remote. Mohammad Darawsha, a lecturer at the Shalom Hartman Institute, told Al-Monitor that the Arab Home founders consist of inward-looking former government employees who do not want to deal with the Palestinian issue. “This is a party created by a lawyer from Sakhnin and is very unlikely to pass the threshold needed to enter the Israeli Knesset,” Darawsha said.

Arab Home leader Abu Rayya was quoted Dec. 28 in Maariv as saying that Arabs, given that they constitute 20% of the population of Israel, must be partners in any decision-making process. Thus, he said, his party would not hesitate to join a coalition led by Benjamin Netanyahu, the current prime minister and leader of the right-wing Likud.

Abu Rayya also remarked that his party respects the “right of the Jewish people to have their state, and we respect the Israeli flag and national anthem.” He noted that Arabs in Israel are part of the Palestinian people, but that the Palestinians have their own leadership, and his party will focus on the status of the Arab minority in Israel.

Farah who suffered a broken leg after being detained by Israeli police at a May 18 protest in Haifa against the Nationality Law, said that in terms of campaigning in the upcoming elections, “We need to focus our election messaging on the need to preserve democracy and to oppose the occupation.”

The Palestinian cause and where each party stands on it are major concerns for Jewish and Arab voters and to the Palestinian leadership in Ramallah, which was instrumental in the last elections in convincing Tibi to join the Joint List and to persuade all the Arab parties to run on a single list to improve their chances of surpassing the vote threshold, which had been increased in part to keep small parties out of the Knesset.

Mohammad Madani, a senior adviser to Palestinian President Mahmoud Abbas on Israeli peace movements, told Al-Monitor that the Palestinian leadership will steer clear of electoral machinations. “We are close to all the candidates and parties, and we wish them success, but we will not be involved in the formations that they choose,” Madani said.

One storyline of the elections will certainly revolve around whether Israelis are willing to hand a fifth mandate to Netanyahu, the longest-serving prime minister in Israel’s history. The role of one-fifth of the population could also figure prominently as an indication of whether issues of peace and equality will be given enough priority in the 21st Knesset.

The debate among Palestinian citizens of Israel in regard to the upcoming elections and seeking voter opinion is a healthy development in determining what those citizens want.