Despite huge ideological gaps, Arab parties in Israel are trying to form a joint list for the election, but their traditional voter base might not follow. 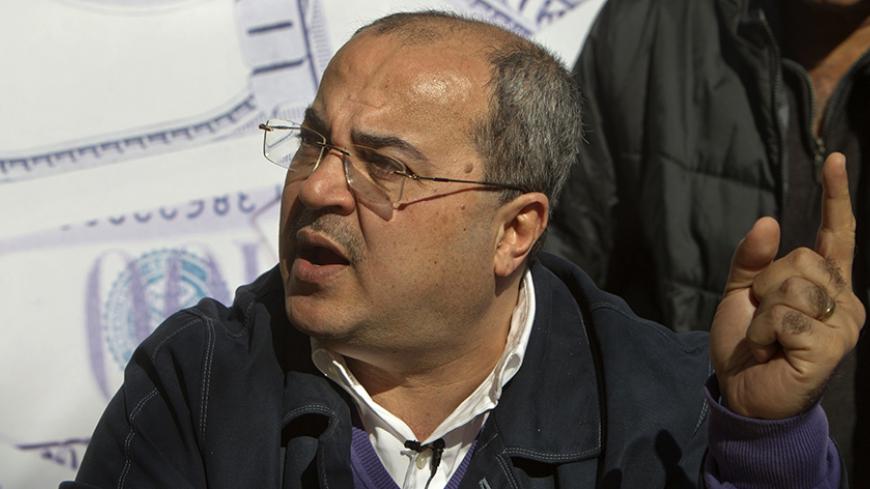 One controversial issue alone has so far prevented the declaration of the establishment of a joint Arab list ahead of the March 17 elections for the 20th Knesset. There is still disagreement on who will be named 12th on the merged list — a place that is considered feasible, provided all the Arab parties really run on a joint ticket.

Knesset member Ahmad Tibi demands that the place be kept for his party, Ta'al, while Hadash insists on having the place reserved for its representative. Al-Monitor got hold of the list drafted by the leaders of the Arab parties on which they have agreed, with the exception, as aforesaid, of the still disputed 12th place.

New Hadash Chairman Ayman Odeh, elected to office Jan. 17 after the forced resignation of Knesset member Mohammad Barakeh, is projected to lead the list. Next on the list is Masud Ghnaim from the Islamic Movement, and he is followed by Balad Knesset member Jamal Zahalka, in the third place. According to polls conducted within the Arab sector, the preferred candidate to lead the list among the Arab voters, primarily among the youth, is Tibi. But Tibi has been assigned only the fourth place on the joint list.

Two slots of the top 10 have been reserved for women — one for Hadash member and founder of the Arab feminist and social change organization, Women Against Violence, Aida Touma-Suliman. Another one, the seventh place, has been assigned to controversial Balad Knesset member Haneen Zoabi. Dov Khenin of Hadash comes eighth on the list, and the 11th place has been reserved for Hadash member Yousef Jabareen, a professor of law at the University of Haifa.

The representatives of the Arab parties believe that if they join forces, they stand to land some 12 or 13 seats in the upcoming elections, and thus consolidate a strong bloc wielding significant power that might tip the scales in the negotiations on the formation of the next government. They believe that such a powerful bloc would enable them to better represent the interests of Israeli Arabs in the Knesset.

The leaders of the Arab parties have managed to overcome quite a few obstacles on the way to unity, and to bridge the deep ideological differences dividing them, if only to cross the electoral threshold, which was raised to a tremendously challenging 3.5% in the upcoming elections. However, while running in a joint Arab list may probably ensure their political survival, it is liable at the same time to alienate some of their traditional voters. The forced merger, bringing together in one list the advocates of differing worldviews, has created frustration and brought disappointment upon their loyal voters — those considered the hard core of each of the parties respectively. After all, what values or beliefs could the voters of the communist Hadash Party share with the elitist Balad voters or, for that matter, with the staunch followers of the Islamic Movement? And what could Zoabi possibly have in common with Knesset member Taleb Abu Arar from the Islamic Movement?

“In our family alone, there are [no less than] 20 traditional Hadash voters,” R., an old friend of mine from one of the Arab communities in northern Israel, told me. “But none of us are going to vote for the joint list, if and when it is set up.” I then asked him what would prevent him and his family members from casting their vote for a Hadash representative, who was projected to lead the list. In response, my friend said, “I cannot possibly cast a vote that would bring to the Knesset a representative of the Islamic Movement or one from Balad. I cannot give them my vote.”

The political “survival list” was drawn up, or actually jerry-rigged, with great effort. The leaders of the Arab parties divided the feasible places on the list among them on the basis of the size of their factions in the outgoing Knesset. However, no ideological line unites them. The world view of the Hadash communists is far removed from the ideology of the Islamists from the Israeli Arab party Ra'am. Would their alliance hold on the day after the elections? It is rather in doubt. The deep differences, the clashing ideologies and the strained interpersonal relationships have all been swept under the carpet of the electoral threshold. And they are bound to crop up once the members of the joint list have to make decisions. In fact, they may well have to make their most fateful decision already on the day following the elections.

Labor Party Chair Yitzhak Buji Herzog — whose list has a slight lead over Prime Minister Benjamin Netanyahu, judging by the polls — said in an interview at the Saban Forum in Washington Dec. 6 that he believed the Arab Knesset members would lend him support from outside the government, if and when he succeeded in forming the next government. But despite these words, there is no guarantee that all members of the joint Arab list will be willing to grant Herzog their support.

At the same time, it is unclear whether the Islamic Movement members named on the joint list, or even the Balad members, would be prepared to accept the leadership of Hadash Chairman Odeh as the head of the list. And would Odeh, for whom it is going to be his first term in office, be able to rally around him all the representatives in the list, maintain its unity and work for a common interest?

Attorney Odeh, resident of Haifa and a political activist of Hadash, has served as the movement's secretary-general. Generally speaking, he is not considered a prominent leader, but rather a party official. Experts say that even within Hadash supporters, Odeh, 40, is hardly viewed as a central leader or as a driving force, and all the more so amid supporters of the other parties. Already in his first term he will have to demonstrate leadership; to connect, bridge and conciliate Knesset members who are tied together in one list, but will surely draw each in his own direction. Odeh's supporters believe that his experience as member of the Haifa municipal council provided him with the necessary tools to reconcile the different currents. His opponents, and there are quite a few of them, are convinced that this burden is much too heavy for him to carry. To instill overall discipline within the faction, amid all the currents, he must turn himself into a magician-politician.

“Uniqueness or unity” — this was the question facing the Arab politicians. However, given the Israeli Election Law, the Arab parties had no choice. Their leaders were forced to veil their ideologies, to cover up the visible cracks and to display unity among their members. How long is it going to last? Well, that depends on their success in harnessing the potential inherent in the 12 or 13 Knesset seats they hope to win. Up to now, there was no Arab party in Israel with a significant electoral power that had any say. In fact, up to now, there has never been a parliamentary Israeli Arab body seen by the Israeli Knesset as a powerful and influential lobby that should be taken into account.