The decision by Knesset member Ahmad Tibi to leave the Joint List has shaken up an alliance already ruptured by ideology and personal interests. 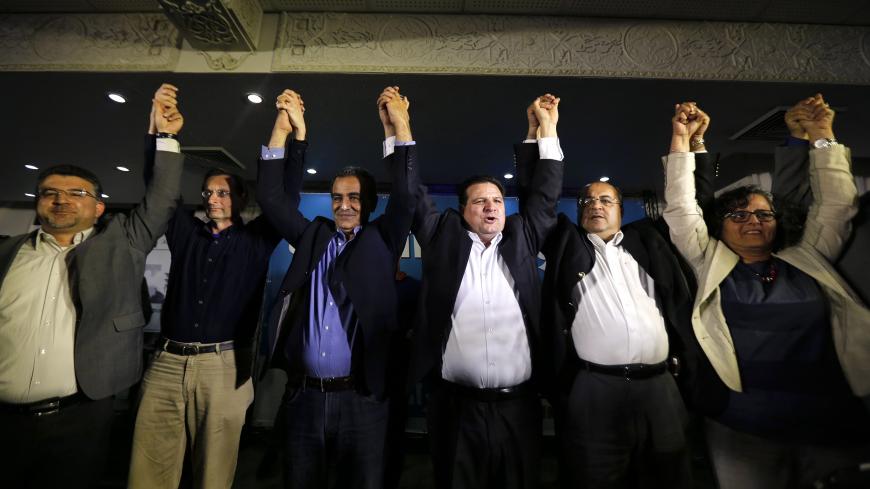 Members of the Joint List initially dismissed Knesset member Ahmad Tibi’s Jan. 8 request to break away from the alliance of four Israeli political parties. Eventually, however, they realized it was no idle threat and that he was serious about running as an independent with the backing of many local Arab council heads and mayors. This support is of vital importance in the Arab community, where large extended families often vote as one. Such strong backing means better chances of getting sufficient votes to cross the electoral threshold — the obstacle that forced the four disparate parties to unite on the eve of the 2015 elections.

The Joint List was composed of four essentially Arab parties: Hadash, Ra’am, Balad and Ta’al. The union, however, was in name only. Plots, frictions and power struggles repeatedly undermined it in the absence of ideological glue to bind its components. Tibi’s decision followed failed attempts to obtain “fitting representation” for his Ta’al party within the Joint List in open primaries or a survey of Arab party voters.

Tibi is convinced that he and his party enjoy far wider support than is reflected in its representation within the joint bloc, as determined by the balance of power upon the union's hasty formation in 2015. At the time, the head of the largest of the four parties — Hadash — was designated to lead the Joint List and promised at least five slots on the Knesset candidates list. Second place and at least three reserved slots went to the representative of the Islamic movement Ra’am, Masud Ganaim. Balad chair Jamal Zahalka was put in third place with at least three reserved slots, while Tibi was placed fourth with at least two. Yet after those understandings were reached, questions about the makeup of the proposed Knesset list lingered and a “reconciliation committee” failed to resolve them. With elections drawing near and the deadline to present the final list looming, negotiators reached a mid-term rotation compromise.

Five Joint List Knesset members did cede their places under the rotation agreement, but the arrangement turned out to be a landmine that threatened to fracture the alliance. It barely kept the Joint List together throughout the Knesset mandate. With the 20th Knesset disbanded and elections set for April 9, all bets are off.

Will Hadash run with Balad despite their deep ideological differences?

Supporters and activists of Hadash are mostly Communists and include some Jews. These members did not feel they had anything in common with Balad, the party once headed by Knesset member Azmi Bishara, who escaped from Israel in 2007 under suspicion of spying for Hezbollah in the Second Lebanon War.

Balad champions turning Israel into a state of all its citizens. Still, contrary to Hadash, which wants to integrate into Israeli society, its Knesset members often make militant and provocative statements that make Hadash activists uncomfortable,

In between Hadash and Balad there is Ra’am, an Islamic-religious movement composed of people who for the most part quit the outlawed Northern Branch of the Islamic Movement after the signing of the Oslo Accords in 1993. Ra’am seeks the recognition of Israeli Arabs as a minority, advocating to anchor their rights constitutionally. It is mostly supported by the Bedouin population in the south of Israel.

Hadash and Balad, both secular platforms, found it hard to join forces with religious Ra’am, but went along anyway for the sake of political survival.

Meanwhile, Balad is undergoing major leadership changes. Its chairman, Zahalka, has decided to quit and will not run for the next Knesset. His colleague, controversial Knesset member Hanin Zoabi, also decided to sit out the coming elections in light of her dim re-election prospects. Yet another member of the original Balad list, former Knesset member Basel Ghattas, is serving a two-year jail term for smuggling cell phones to Palestinians in Israeli prisons.

If and when the three remaining parties decide to stay together, they are in for vicious infighting. Hadash is twice as strong as each of the two other parties in terms of electoral support, but each of the three alone will have a hard time crossing the electoral threshold of 3.25% of the vote. The task ahead of Hadash chair Ayman Odeh, who also heads the Joint List, is to keep the three together and at the same time make the other two understand that they need him and his party more than he needs them to survive politically.

Tibi is taking a big gamble. The coming elections are expected to be the most contentious and divisive in Israel’s history, and the Jewish turnout is predicted to be very high, meaning that meeting the electoral threshold will be almost impossible for the Arab parties.

Asad Ghanem, a senior political science lecturer at Haifa University and a longtime scholar of Israeli Arab society, believes Tibi stands a good chance of winning enough votes. Ghanem told Al-Monitor that Tibi has a broad base of support that includes the heads of 20 local councils. If Tibi does run as an independent, Ghanem says, he will strip away at least half of the Joint List’s current support, which was equal to 13 seats in the past Knesset.

“The only component in the List able to run alone and garner additional votes is Ahmad Tibi,” Ghanem said. “None of the others, not even Hadash, can run alone.” Balad is not a significant factor from an organizational standpoint, he estimates. Hadash and the Islamic movement, on the other hand, are strong in terms of logistics, with many active supporters and strong branches, although support for them has declined. “Tibi enjoys public support from the people,” Ghanem said. “His challenge is to get this support organized and bring it to the ballot boxes. This is a complex task.”

Tibi worked hard in the last Knesset. He toured Arab communities throughout Israel and mobilized support among young people on issues of paramount importance to them. Tibi, who was for years perceived as being exclusively focused on issues pertaining to the Palestinian Authority and who even identified himself as an adviser to late PLO chair Yasser Arafat, has worked diligently to change this image. He may have realized what the people want — for him to represent them and resolve their problems more than to represent Palestinian President Mahmoud Abbas and the Palestinians living in the West Bank.

This is probably why Ta’al is changing and adapting its agenda. From a platform focused on the diplomatic process, resolving the Israeli-Palestinian conflict and the establishment of a Palestinian state with Jerusalem as capital, it’s turning into a social-democratic movement focused on socio-economic matters that dominate the Israeli-Arab priority list. This focus fits the general feelings of despair over the stalemated diplomatic process; all the Palestinians, including Tibi, feel that a resolution to the conflict is drifting further and further away.

“Proud to be from a party that knows how to place ideology ahead of personal interests,” Odeh tweeted when he realized that Tibi was determined to walk away from the Joint List. “The one who wants more than anything to see the Joint List dismantled is (Prime Minister Benjamin) Netanyahu,” he tweeted. “Those who want to divide and rule the Arabs are the radical right.”

Tibi is unmoved by the accusation that he has put his personal interests first. He has already started putting together his Knesset list, which is expected to draw votes away from all his former partners. Those likely to join his run are Nazareth Mayor Ali Salem as well as former Sakhnin Mayor Mazen Ghna’im, who also led the council of heads of local Arab authorities.

And what is to become of the Joint List? Ghanem said those who remain will have to sort themselves out. Each of its Knesset members was strong in his or her own right, he says, but as a collective their influence was negligible. “The shock of Tibi’s departure could help them wake up,” he concluded.