Is Israel’s Arab party about to split?

The Joint List of predominantly Arab parties is on the verge of disintegration — not because of the wide ideological rift amid its factions, but over a vacant Knesset seat. 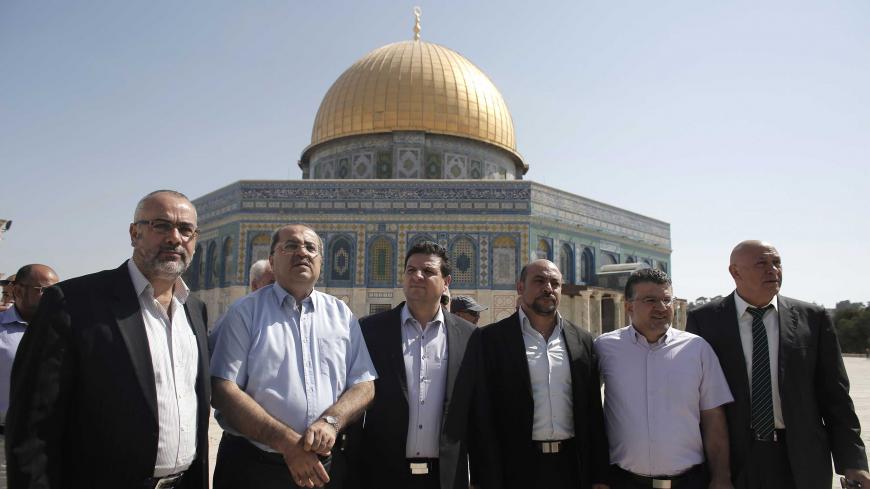 Israeli-Arab lawmakers from the Joint List of Arab parties (from L to R) lawyer Osama Saadia, Knesset member Ahmad Tibi, leader of the joint list of Arab parties Ayman Odeh, and political leaders Masud Ghanayem, Youssef Jabarin and Basel Ghattas pose for a photo in front of the Dome of the Rock at the Al-Aqsa Mosque compound, Old City of Jerusalem, July 28, 2015. - AFP PHOTO / AHMAD GHARABLI

Barely does a day go by that the Balad Party does not in some way challenge the other parties that comprise the Joint List, a unified slate of predominantly Arab parties. The scandals and provocations engineered by the party have often embarrassed other Arab lawmakers and political activists. However, they almost always refrained from reacting in public, adhering to the commitment made when the alliance was established in 2015 to wash their dirty laundry at home and not to give their many detractors any reason to crow over their internal differences. They were especially loathe to give any satisfaction to the head of the Yisrael Beitenu party, Defense Minister Avigdor Liberman, whose party had pushed through legislation raising the electoral threshold in order to keep the (small) Arab parties out of the Knesset. At the time, Liberman’s initiative pushed four Arab parties to unite into one large Knesset list.

Since the birth of the Joint List in January 2015 in Nazareth, its members have managed admirably to resolve the problems arising from their innate ideological and social differences behind closed doors.

When Balad Knesset member Haneen Zoabi was shown on July 28 at Jerusalem’s Temple Mount confronting Israeli police, the cops were not the only ones keeping themselves in check to avoid getting dragged into the provocation she tried to engineer. Knesset members from the other Arab parties — which are part of the Joint List — barely concealed their chagrin at her conduct, but held their tongues.

When her fellow party lawmaker Basel Ghattas was caught smuggling cellphones to Palestinian prisoners jailed for security-related offenses and sentenced to two year’s imprisonment, the most that Israeli reporters were able to elicit from members of the Joint List was that they were surprised.

In recent months, Arab lawmakers and activists with whom I spoke, most of them Hadash Party members, complained that Balad had dragged the Joint List into places they didn’t want to go. One of them (speaking on condition of anonymity) said that they were dragged into “undesirable” territory. Instead of working for the integration of the country’s 20% Arab minority into Israeli society, as espoused in the vision of Joint List leader Ayman Odeh, Balad was diverting them further and further away from that goal, they complained.

On Aug. 30, Balad drove another wedge between Israeli Jews and Arabs, also angering many among the Arab community who do not support the party. At a summer camp run by Balad for Israeli-Arab children and youth, the organizers took the children for "a day of fun" to Dheisheh refugee camp in the West Bank. The children were then taken on a march “to honor the shahids” (Muslim martyrs) in two groups. One was dubbed “Yasser Arafat,” named after the late leader of the PLO, and the other “Izz ad-Din al-Qassam,” the armed wing of the Islamist Hamas movement. Together, they marched and shouted, “With blood and fire we will redeem you, shahids” and “With blood and fire we will redeem you, Palestine.”

In response, Knesset Committee Chair Yoav Kisch of the Likud fired off a letter to Attorney General Avichai Mandelblit demanding that Balad be investigated for incitement to violence and support of terrorism. “The Balad Party has once again crossed a red line with its camp activity and its nature, and the severity of this matter should not be tolerated or discounted,” Kisch wrote.

Some among Israel’s Arab community agreed that the party had, indeed, gone too far. Some told Al-Monitor that Odeh, who also heads the Hadash Party, cannot keep ignoring such provocations even if it means dismantling the unnatural alliance that they regard as harmful to the cause of Arab-Jewish coexistence.

The Joint List is, in fact, on the verge of a breakup, but not over Balad’s shenanigans and the discomfort and embarrassment they generate among the other Arab parties under its umbrella.

The fate of the alliance will be determined by Sept. 5, at the end of the Eid al-Adha holiday, and it hangs on one Knesset seat. All the tensions, egos and hatreds suppressed for 2½ years are now erupting in a stormy struggle over the Knesset seat vacated by Ghattas when he was sent to prison.

On the eve of the March 2015 elections, the four parties comprising the Joint List — Hadash, Balad, Ra’am and Ta’al — agreed on a mid-term rotation. Knesset members Osama Saadia of Ta’al and Abdullah Abu Maarouf of Hadash, who currently hold the 12th and 13th spots on the list, were supposed to cede their seats to Joumah Azbarga of Balad, No. 14 on the party’s slate, and to the No. 15, Said al-Harumi of Ra’am. Azbarga went on to join the Knesset, but not because of the rotation arrangement; he moved into the slot vacated by Ghattas. Harumi assumed the Knesset seat vacated for him by Abu Maarouf’s pre-arranged resignation.

Balad is now demanding an additional Knesset representative in keeping with the rotation agreement, with Niveen Abu Rahmoun next in line for that slot. But Abu Rahmoun is ranked in 19th place on the list of incumbent and potential Joint List Knesset members, and for her to assume a seat, the No. 16 and No. 18 would have to step aside, in addition to Saadia. This convoluted succession arrangement is the focus of a bitter struggle among the four parties, to which the Israeli Arab-language media are devoting intense coverage.

The anger among the Israeli Arab electorate at the lawmakers of the Arab Joint List crosses party lines. Social media is buzzing with posts asking how the elected representatives who overcame ideological divides and tensions for two years, maintaining the party’s unity, are now risking it all over a Knesset job and its attendant pay and official car. Some Arab media pundits are panning this internal struggle as an "embarrassment,” wondering why lawmakers are willing to sell out the cause of Palestine for the sake of personal benefits.

So the future of the Joint List will be determined next week. Those who predicted it would fall apart soon after the elections due to its unnatural makeup and forced union were wrong — big time. Its members were able to surmount their substantive divides and resolve issues of principle. But one Knesset slot has become the "be-all and end-all" of the union’s survival, and Israel’s Arab electorate is unlikely to forgive such pettiness.