Abbas unfazed by criticism of participation in Peres' funeral

Palestinian President Mahmoud Abbas’ participation in former Israeli President Shimon Peres' funeral brought out raw anger against Abbas, but he remains adamant in his pursuit of peace through negotiations. 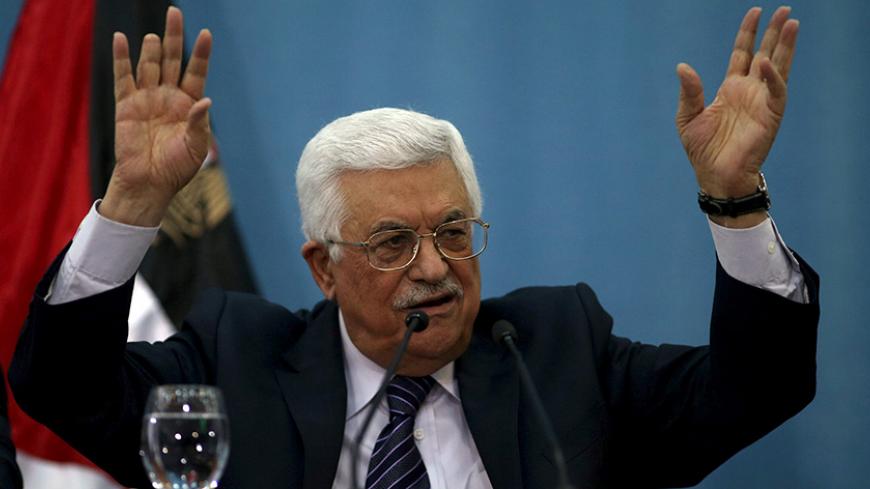 A senior adviser to President Mahmoud Abbas visited a local vegetable store in Ramallah on Oct. 2. The store owner and the adviser talked about Abbas' having attended the funeral of former Israeli President Shimon Peres on Sept. 30. When the owner of the vegetable store conveyed his criticism, the adviser related to him part of the discussion that had taken place at the Muqata, the presidential headquarters in Ramallah, prior to the funeral.

In a conversation with Al-Monitor, the vegetable store owner talked about the conversation with the adviser to Abbas on condition of anonymity. He said that the adviser had told him, “We told him [Abbas], 'How does a leader benefit if he wins over the entire world but loses the love of his people.'” But the Palestinian leader was adamant about going to attend the funeral irrespective of the advice of the adviser or his aides.

“I am 82 and I am not running for office anymore. What I am doing is in the best interest of my people,” the adviser related as to what Abbas had said to those who opposed his action, according to the vegetable store owner.

In the aftermath of Abbas’ participation at the funeral, a flood of what appears to be raw anger and opposition was part of discussions in shops and homes. While those in opposition were the loudest and most vocal, a number of saner voices have since emerged trying to put the visit in perspective. Much of the opposition appeared to be politically motivated, reflecting fractures in support for Abbas not only in the public at large, but even with the ruling Fatah movement. Attacks used treasonous language to describe the actions of Abbas.

Religion was also inserted on both sides of the debate. Hamas leader Mahmoud al-Zahar said on Iranian TV on Oct. 1 that Abbas’ actions make him — in religious terms — tantamount to a Jew in the eyes of Palestinians. “He doesn’t represent us, he is a creation of Israel and I hope he joins Peres in hell,” Zahar said.

The attacks emanated not only from Hamas supporters, but also from some of Abbas’ supporters. Opposition to the president's action was publicly sounded from Fatah’s Central Committee member Tawfiq Tirawi and from the Fatah student council members at Birzeit University.

Tirawi, who was the head of the Palestinian intelligence until he was demoted by Abbas in 2008, issued a statement questioning the president’s decision. Tirawi, who noted that the Fatah Central Committee was not asked for advice, said that if he had been asked, he would have advised against participation. “He [Peres] is a Zionist who has been immersed from head to toe with the blood of the Palestinians and fellow Arabs,” Tirawi said in a press release that was republished on various websites Oct. 3. The Fatah student council at Birzeit University issued a statement Oct. 1 calling on Abbas to resign.

However, Bassem Barhoum, a Fatah spokesman, was very supportive, describing Abbas’ action as a “breakthrough.” Writing Oct. 3 in the PLO-owned daily Al-Hayat al-Jadida, Barhoum said, “What was seen in the participation of Abbas in the Peres funeral was courage and taking true responsibility, as well as taking the right decision without worry about whether this decision is popular or not.”

Supporters and opponents, however, did not limit themselves to issuing press releases and writing articles in newspapers. Demonstrations in support and against the participation took place in the Gaza Strip and in Ramallah. But after a couple of days of angry statements, some clear-headed discussions began in Palestine, which slowly turned the pendulum back to the center with more sober political debate rather than mudslinging.

Mohammed Daraghmeh, a veteran reporter and a close observer to the Palestinian leader, wrote in Madar News on Oct. 1 that Abbas’ participation in Peres’ funeral was aimed at sending a message to the Israeli public that there is a genuine Palestinian partner to peace. “Abbas is betting on the return of the spirit of the two-state solution and sees that the right-wing governments in Israel are the obstacle. Abbas is investing politically with the Israeli public hoping that one day this public will bring a government that believes in ending the occupation and the establishment of a Palestinian state alongside Israel,” Daraghmeh wrote.

But another independent analyst, Hani Masri, said in a column in As-Safir on Oct. 4 that Abbas’ participation is ”a grave mistake” because it reflects a policy of “betting on the return of the peace process, which died a long time ago.”

Masri noted the absence of King Abdullah of Jordan and Egyptian President Abdel Fattah al-Sisi, both of whose countries have peace agreements with Israel, and argued that by “pursuing this bet, Abbas prevents Palestinians and Arabs from searching for new options instead of the ones that have failed to produce results.”

Abbas’ image has been further tarnished by his participation in Peres’ funeral and the strong popular opposition to it. But if Abbas is serious about not running for office again — as his adviser related to the vegetable store owner in Ramallah — his action will speed up the succession leadership struggle. But the big question that remains is how it will affect the overall Palestinian efforts to end the occupation.