Unlike the late Prime Minister Sharon, who initiated the Gaza disengagement precisely when his status as Mr. Security was at stake, Prime Minister Benjamin Netanyahu won't seek a diplomatic initiative even after the same security failure. 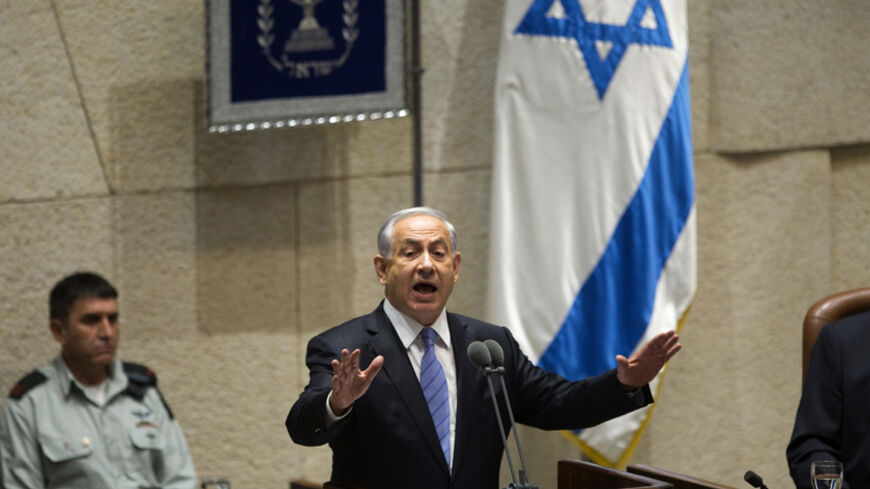 Israel's Prime Minister Benjamin Netanyahu speaks at the opening of the winter session of the Knesset in Jerusalem, Oct. 27, 2014. - REUTERS/Ronen Zvulun

Ever since he was first elected premier 18 years ago at the tender age of 47, Benjamin Netanyahu has marketed himself as the strong and powerful leader of a small state surrounded by enemies threatening its destruction. He promoted himself as Israel’s only real alternative to feeble leaders such as former President Shimon Peres, former Prime Minister Ehud Olmert, Justice Minister Tzipi Livni and former Prime Minister Ehud Barak, all of whom gamble with the country’s security.

Netanyahu has led the Likud for a grand total of five election campaigns. In all of them, his campaign slogans contained the words “strong,” “powerful” or “security.” In the 1996 elections, Netanyahu roundly defeated Peres after accusing the latter of intending to divide Jerusalem on the heels of a wave of terror attacks, with the slogan, “Netanyahu — Forging a Secure Peace.” In that era, only a few months after the assassination of then-Prime Minister Yitzhak Rabin, “peace” was still a strong bargaining chip in Israeli publics, and Netanyahu’s campaign managers took pains to incorporate the word in his slogan. It was effective.

That was the last time Netanyahu used it, though. When he ran for a second time for the premiership against Barak in 1999, he chose the slogan “A Strong Leader for Israel.” This time he was roundly defeated, because he faced off against the former chief of staff, then viewed as Rabin’s successor.

Netanyahu stepped back from politics after his defeat, only to return a few years later. In the meantime, he marketed himself as a worried citizen facing the collapse of the Oslo Accord and the beginning of the second intifada in 2000. After returning to lead the Likud, Netanyahu ran against Olmert’s Kadima party in 2006. At that time, after the victory over Hamas in Gaza, Netanyahu promised Israelis that in comparison to the other contenders, he was “Strong against Hamas.” On election day, Netanyahu and the Likud were crushed to bits with only 12 mandates.

The evolution of Netanyahu’s campaign slogans prove that not much changed since 1996. In the 2009 elections, when Netanyahu returned to the premiership, the Likud slogan was, “Strong in Security, Strong in Economics.” In the last election campaign, when Netanyahu teamed up with Foreign Minister Avigdor Liberman, the two marketed themselves under “The Power to Lead.” Netanyahu’s political rivals from the opposing camp came and went, were defeated and replaced, until three of them who had earlier claimed that Netanyahu was dangerous to Israel — Barak, Livni and for a short time former Defense Minister Shaul Mofaz — teamed up with his governments. The key to Netanyahu’s survival from 2009 on is his miracle formula of “Strong Leader” and “Mr. Security.” He projected the image of a leader who, while relentlessly holding fast to Israel’s security interests, ostensibly also seeks peace. The second part of the formula have enabled leaders from the left and center to join his governments since 2009.

For a period, Netanyahu was also the darling of Peres, until the latter understood that the prime minister’s conciliatory 2009 Bar Ilan speech was a misrepresentation and that in fact Netanyahu skillfully blocked all diplomatic initiatives. Here, too, Netanyahu followed the same formula in which he extends a hand to peace — at least outwardly — for the sake of appearance, while stipulating preconditions that prevent any significant diplomatic progress. One example of this is his demand that the Palestinians recognize the State of Israel as a Jewish state as a condition for negotiations.

Thus, Netanyahu survived politically over the last six years, when senior members of the left-center camp held positions in Netanyahu’s right-wing governments. Once it was Barak; another time Livni and Finance Minister Yair Lapid had their turn. At the beginning of working together, they are always full of hope and talk about meaningful conversations with Netanyahu in which he demonstrates a willingness to advance the diplomatic process.

Netanyahu experienced relative peace and quiet on the security front in his last two terms by putting on the outward appearance of striving for an agreement, as when US Secretary of State John Kerry engaged in shuttle diplomacy in the region. This also allowed Netanyahu to boast that during his years in office, Israeli cities were calm, and that he wrestles with the Iranian nuclear threat from morning to night. He also claimed credit for the relative quiet between the rounds of fighting in Gaza. When Netanyahu talked about these periods of peace and boasted about them in his speeches, he always glorified Israel’s military might and the strength of his own leadership. What he left out was that it was in Palestinian interest at the time to forestall terror from the West Bank. Netanyahu used his excellent rhetorical skills to convince a significant portion of the Israeli public that President Mahmoud Abbas was not a partner to the diplomatic process, that he is a weak leader controlled by Hamas and, therefore, Israel cannot negotiate with him.

Over and over, public opinion polls have voted Netanyahu as the most suitable candidate for the premiership, with a very large margin separating him from any other candidate.

But since last June, it has become crystal clear that Netanyahu’s magic formulas were empty of meaning. The Protective Edge campaign that lasted 50 days and undermined the personal security of Israeli citizens from the Gaza envelope to the Tel Aviv area put the veteran prime minister in a new situation. He can no longer flatter himself that there was no war during his term of office, versus Olmert, who fought two. Netanyahu is now responsible for the longest round of fighting in Gaza, a campaign that brought no clear victory and did not tilt the balance.

Netanyahu faces what is emerging as a third intifada. Soldiers and young Israelis are being murdered in central Israeli cities in stabbing and vehicular terror attacks; Jerusalem is burning while concrete blocks and police are posted in bus and train stations. The atmosphere in Arab localities within the Green Line is tense, explosive. What will Netanyahu tell Israeli citizens in the coming election campaign that will probably take place in 2015? That he defeated Hamas? That he brought security? That he “forged a secure peace”?

Even Netanyahu’s secret weapon, his struggle against an Iranian bomb, is losing its effectiveness as an agreement between Tehran and the world powers is being hammered out in Vienna. US-Iran relations are cautiously warming, while Israel’s prime minister has become a hated, derisive personality in the White House. Meanwhile, Netanyahu has given up any appearance of trying to reach an agreement with the Palestinians. In his latest speeches, he attacks Abbas and repeatedly winks at the right with hawkish messages.

Attorney Dov Weissglass, who was chief of staff under Prime Minister Ariel Sharon, has said that the left's Geneva Initiative spurred him to craft the Disengagement Plan from Gaza. That was in the midst of the second intifada, when dozens of civilians were killed in suicidal terrorist attacks in the city centers. Sharon’s popularity started to drop in the opinion polls and, precisely at this point, the leader identified first and foremost with security created a moderate diplomatic initiative. Now that the ''strong leader'' concept has collapsed again, Netanyahu could also propose hope instead of despair and fear. Alas, this will probably not happen.