Will Abbas’ foes thwart his chances for success at Trump meeting?

Palestinian President Mahmoud Abbas has strenuously lobbied President Donald Trump on behalf of the Palestinians, but his rival Marwan Barghouti and Hamas are trying to sabotage his efforts. 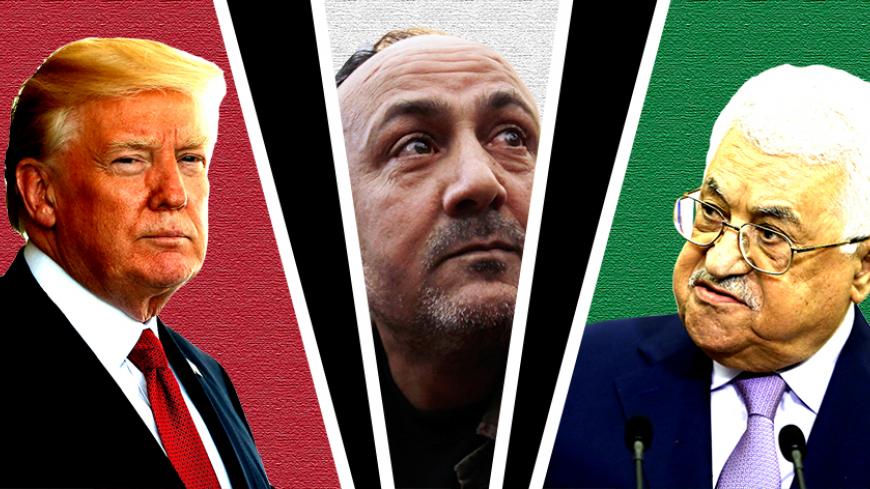 The call for a Day of Rage by imprisoned Fatah leader Marwan Barghouti could hamper efforts by Palestinian President Mahmoud Abbas (R) to woo US President Donald Trump (L). Image by Hugo Goodridge/Al-Monitor -

In response to imprisoned Fatah leader Marwan Barghouti’s call for a Day of Rage, Palestinian youths demonstrated and rioted on May 19 throughout the West Bank and in Gaza near the border with Israel.

“Two forces in the hard-core opposition to [Palestinian President] Mahmoud Abbas bear responsibility for the deaths of the two Palestinians killed last week and dozens more, who were injured during demonstrations in the territories on the Day of Rage, in solidarity with the prisoners on hunger strike,” an Israeli security official told Al-Monitor, speaking on the condition of anonymity. He cast the blame squarely on Barghouti, who initiated a hunger strike by hundreds of Fatah prisoners being held by Israel, and on the Hamas movement. He claims that each individually and both together wanted to challenge the Palestinian president and make as much trouble as possible for him just before US President Donald Trump pays an official visit to Israel and the Palestinian Authority (PA) May 22-23.

The same Israeli official said that Barghouti and his supporters are investing considerable efforts in a public relations campaign aimed at the Palestinian population in support of the hunger strike, the purpose of which is said to be to improve the conditions of Palestinian prisoners in Israeli jails. He noted how frustrated they are that the hunger strike has failed to achieve its objectives and has even called into question whether Barghouti really could motivate the Palestinian street into action. There have been very few demonstrations in support of the hunger strikers, and even those that have occurred attracted fewer protesters than Barghouti and his supporters anticipated. For the most part, Palestinians support the hunger strike, but preventative actions by Palestinian security forces, as ordered by Abbas, have succeeded in limiting the scope of their protests.

The same Israeli source believes that Abbas could have stopped any demonstrations he wanted on the West Bank, but that he decided instead to let prisoners' families “release some steam” in a controlled manner. On the one hand, Abbas cannot openly take action or speak out against the popular strike, but on the other hand, he is making a huge effort to prevent Barghouti from mobilizing the masses, even using PA security forces to that end. With the Trump visit pending, Abbas has wanted to maintain the image that the Palestinians have presented to the Americans of a stable government that is able to maintain order despite all the challenges it faces.

Hamas is the other force that wants to instigate chaos in the Palestinian territories. Without the movement's encouragement and approval, hundreds of demonstrators from across Gaza would not have been able to get anywhere near the border with Israel on May 19 to clash with Israel Defense Forces (IDF) troops at several points along the fence. Experience shows that demonstrations along the border fence rarely end without casualties, and indeed, two Palestinians were critically wounded and another 30 were taken to hospitals after inhaling tear gas. The Israeli source claimed that Hamas consciously encouraged these young people to clash with the IDF for political reasons, since this would benefit the movement in its internal struggle against the PA.

Most of the demonstrations in the West Bank were promoted by the National Committee to Support the Prisoners, the group of Fatah activists associated with Barghouti. Consisting primarily of members of the Tanzim, Fatah's military wing, which Barghouti once commanded, these activists have been joined by representatives of other Palestinian factions, including the Popular Front for the Liberation of Palestine, in an attempt to present a national consensus. It is of interest to all of these factions to use the strike to score political points. At the same time, however, the members of the National Committee know that every Day of Rage they announce will inevitably take its toll in Palestinian lives and injuries.

In the May 19 violent clashes in the West Bank, 11 demonstrators were injured by rubber bullets, and more than 50 others received treatment for tear gas. This followed the incident a day earlier near the West Bank Palestinian village of Hawara, in which 23-year-old Muataz Hussein Hilal Bani Shamsa was killed when a settler from the Itamar settlement fired live ammunition at Palestinians he claimed were trying to lynch him. This incident took place while 200 Palestinian supporters of Barghouti participated in a demonstration there, in favor of the hunger strike. They were responding to a call from Fatah activists who want to set the territories ablaze in the days leading up to Trump's visit.

All of these events and machinations show how complex and tangled internal Palestinian politics can be. Since Trump's election, Abbas' office has been working with admirable intensity and efficiency to get his administration to consider Palestinian interests when establishing its policies for the region, and, in fact, the White House has changed its tone much quicker than expected. The anti-Palestinian rhetoric that was so prevalent when Trump first entered office has been tempered, and according to prevailing assessments, the new administration now sees Abbas not only as a partner for negotiations, but also as a positive force in the Middle East. Instead of enjoying this uplifting turnabout in the administration's attitude, however, the Palestinian president and his top officials find themselves forced to block attempts in the West Bank and Gaza to set the region on fire, just to make trouble for Abbas and scuttle his diplomatic achievements.

A senior Palestinian source who spoke with Al-Monitor on condition of anonymity confirmed that the Palestinian leadership is preparing for an escalation of tensions in the territories as soon as the relaunch of diplomatic negotiations gains impetus, and he blames what he calls “opposition” forces for this. He said that Abbas' office and other “positive” forces in Fatah could have brokered an agreement between Israel and the hunger-striking Palestinian prisoners that would have improved the conditions of their imprisonment while reducing violence in the territories. The problem, it is said, is that Barghouti himself is blocking any chance of that so he can reap political benefit from the situation.

It is obvious to everyone that the purpose of the hunger strike is not just to improve conditions for the prisoners. It is rather designed to also boost Barghouti's standing in his political struggle against Abbas.