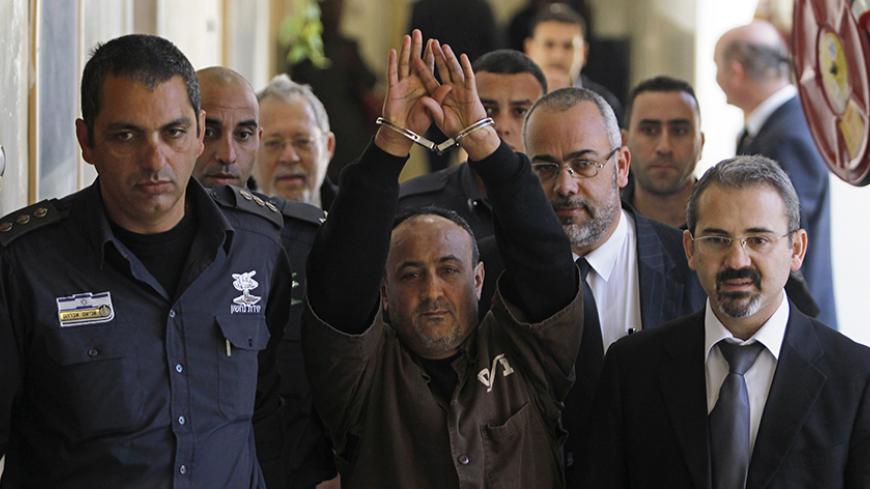 On April 17, about 3,500 Fatah prisoners incarcerated in Israeli prisons plan to begin a hunger strike. The strike is being organized by the organization’s high-ranking member Marwan Barghouti, who was sentenced in 2004 to five consecutive life terms and is being held in a prison in the south of Israel.

According to data presented by the Israel Prison Service, about 2,900 Fatah prisoners are incarcerated in Israel. Qadura Fares, the head of the Palestinian Prisoners Club, told Al-Monitor that there are about 3,500 Fatah prisoners when including Fatah detainees under investigation (meaning those detained but not sentenced yet) and administrative detainees (many of the detainees and prisoners are held in the southern Ketziot Prison). The 2,900 sentenced prisoners make up close to half of the Palestinian prisoners in Israel. Fares said he believes the hunger strike can be averted: He said Israel should enter into negotiations regarding the prisoners’ demands, to reach a compromise. But, he said, “Instead of acting rationally and logically, Israel prefers to create a field hospital near the Ketziot Prison and prepare for the strike.”

Fares was referring to Public Security Minister Gilad Erdan's statement that Israel will not surrender to the demands of the prisoners and is making advance preparations for the hunger strike. For example, a field hospital is to be erected close to Ketziot so that if hundreds of prisoners go on strike, they will not have to be transferred to Israeli hospitals, which could wreak havoc on Israel’s health system. Among other steps, Erdan ordered a call-up of reserve soldiers.

Tension among security prisoners in Israel has been high for many months. The Palestinians claim that as the number of inmates rises in the prisons, Israel toughens its policy toward them; the cells are more crowded and prison conditions are worsening, bringing the situation to a boiling point. Fares said that according to data received by the Palestinian Prisoners Club, the number of Palestinian prisoners from all the organizations has risen by almost 2,000 following the eruption of the recent terror wave in October 2015. This brings the total number of inmates to almost 6,000, very similar to the number of prisoners during the second intifada.

Fares ticked off the main problems causing the agitation among the prisoner leaders. He said that the main issue is the International Red Cross' May 2016 decision to decrease the frequency of family visits to inmates from twice a month to once a month (at the time, the Red Cross explained that because of the difficulties of West Bank families to travel to Israel, there were few demands for second visits). Fares said the Palestinians proposed that Israel allow the Palestinian Authority (PA) to replace the Red Cross in overseeing prison visits; this would include the logistics connected to ferrying family members to the site and coordination with the prisons. However, Israel rejected the proposal. “A situation has been created in which thousands of family members, most of whom cannot enter Israel [from the PA], are not able to visit their incarcerated relatives,” Fares said.

The unrest within Israeli prisons started some seven years ago when Israel’s Committee of Ministers decided to stiffen Palestinian jail conditions to resemble the conditions under which Israel Defense Forces soldier Gilad Shalit was then held by Hamas in the Gaza Strip. And so, in May 2010, the committee resolved to revoke family visits and academic studies — privileges that had been accepted in Israel’s prisons for many years. In fact, until then, prisoners who exhibited “good behavior” were given the opportunity to study for Israel’s matriculation exams and even undergraduate degree studies through the Open University. Many security prisoners took advantage of the opportunity to acquire a higher education during their incarceration, and this opportunity also served as an incentive to maintain a relatively calm environment in the prisons. Eventually, this resolution was frozen and never carried out, so as to avert a crisis among the prisoners.

Fares cited one more important element where prison conditions have deteriorated: Israel removed public telephones from the prisons, telephones that had allowed them to speak to their families once or more a month. This, too, had a calming influence. And this decision is especially crucial in light of the lowering of the frequency of family visits.

Israel’s Prison Service belittles the demands of the prisoners. It says even Barghouti knows that Israel will not accede to the new demands, which include installing new public telephones and allowing pictures to be taken of the inmates with their family members to be disseminated in the territories. These are unreasonable (from the Israeli point of view) and unacceptable requests due to obvious security considerations.

At the Fatah conference in Bethlehem in December, Barghouti was soundly defeated when he ran for the position of deputy to President Mahmoud Abbas. Until that conference, Barghouti had been viewed as Abbas’ successor, at least among the security prisoners and other backers. These had even waged a campaign to pressure Israel to free Barghouti from jail to serve as a moderate, evenhanded leader in the PA. But Abbas managed to expel most of Barghouti’s backers from the Fatah list just as he did to another political rival, Mohammed Dahlan.

Some sources in Israel claim that prisoners are arguing among themselves regarding the efficacy of a hunger strike. True, prisoners who choose not to strike may be viewed as traitors and expelled from the community. However, the prison service is of the opinion that there is no certainty that all the prisoners will obey Barghouti’s call to strike. And even if the majority does, initially, join the strike, prison service officials estimate that the strike won’t last long; the prisoners will realize that Barghouti’s motives are political in nature, and that most of his demands are not reasonable.

However, Fares vehemently rejected claims of political considerations in Barghouti’s call to arms. He said the prison service “tried to inject political elements in the past [in other strike cases], and today they argue that Barghouti wants to strengthen his position.” Still, Fares said that the position of the famous, elite prisoner is strong and stable, and that Israel should enter negotiations before building field hospitals.