Coordination of positions between Israel and the team of Palestinian President Mahmoud Abbas brought about the end of the prisoners’ hunger strike. 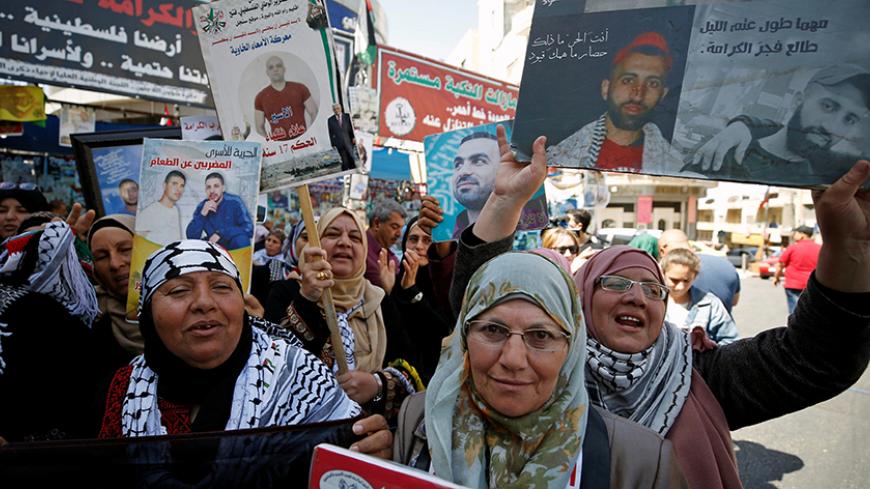 Palestinians celebrate after Palestinian prisoners ended a hunger strike over their conditions in Israeli jails, Ramallah, West Bank, May 27, 2017.

At 4 a.m. May 27 — some 90 minutes before the start of the monthlong Ramadan fast — the hunger strike by Palestinian prisoners in Israeli jails came to an end exactly 40 days after it was declared. Only around 1,300 of some 6,200 Palestinians jailed in Israel went on strike, and according to data compiled by the Israel Prisoner Service (IPS), about half of them resumed eating even before the strike ended. Israel was encouraged by the fact that senior Fatah member Marwan Barghouti and other leaders of the Palestinian prison population had failed to generate a widespread protest. The Palestinian Authority’s Prisoners Club rejected the Israeli figures, calling them disinformation designed to belittle the strikers and hurt the instigators. But even if the numbers are exaggerated, there’s no doubt that Israel and the PA took the hunger strike seriously, viewing it as a common threat that required cooperation in order to minimize its damage.

As previously reported by Al-Monitor, the mass fast was a major headache for Palestinian President Mahmoud Abbas. Not only was the timing bad — as he was making great efforts at rapprochement with the Donald Trump administration — it also threatened to help elements in the West Bank take advantage of the strike for domestic political ends. For example, supporters of Barghouti, who is serving five life terms in an Israeli prison, declared several “days of rage” and called on Palestinians to clash with Israeli forces — calls that displeased Palestinian leadership in Ramallah. Israel and the PA quickly realized that they have to join together to bring the strike to an end.

Al-Monitor has learned from a senior Palestinian source who spoke on condition of anonymity that since the very start of the strike, Israel and the PA were in regular contact to prevent the strike from veering out of control. They understood that Barghouti was the main figure behind the strike and he had to be made to come down from the tall tree he had climbed.

“There were psychological maneuvers,” says the Palestinian source, refusing to elaborate. “When there’s a common cause and coordinated activity, the result is positive. Almost like the security coordination between Israel and the PA in dealing together with a common threat.”

An Israeli source familiar with the moves that ended the strike tells Al-Monitor that during the course of the strike, the IPS tried to undermine Barghouti’s standing among the prisoners and portray him as someone more concerned with buttressing his eroding political standing than with the conditions of the prisoners. According to the source, the results of this effort were mixed. Not everyone believed the clip provided by the IPS in which Barghouti is seen secretly taking a bite out of a chocolate bar in violation of the strike that he himself declared. Some of the prisoners said that the clip was fabricated as part of an Israeli propaganda campaign. Subsequently, Israel decided that humiliating Barghouti would not help end the hunger strike and might make him become more entrenched in his demands. The assessment was that there was no point in continuing to embarrass him and it would be better to give him a way out.

Throughout the strike, the IPS insistently denied negotiations were taking place with the prisoners, unlike previous hunger strikes in which, alongside the IPS, the Shin Bet security agency was also involved. The ambassadors of Egypt or Jordan have also helped mediate in the past. But the IPS claims were not exact. Although the IPS did not conduct direct talks with the inmates this time, contacts were conducted via representatives of a joint civilian Israeli-Palestinian committee, setting out red lines for the prisoners’ demands and mapping out proposals for ending the strike without portraying Israel as having given in to “terrorist” demands.

One of the demands of the strikers was to maintain two family visits per month for the inmates. Israel, for example, was quite willing to accede to this demand. The second visit was actually canceled by the Red Cross, not by Israel, citing budgetary constraints hampering the transportation of the families from Gaza and the West Bank to the jails inside Israel. Thus, the Red Cross agreed to pay for one visit per month only.

Israel and the Palestinians understood that an agreed-upon solution of this issue would put Barghouti’s mind at ease and would also not present Israel as having given in to his demands. The Israeli representatives on the civilian committee calculated the cost of a second monthly visit at 6 million shekels ($1.7 million) and argued that the PA should foot the bill.

Some 10 days ago, Palestinian President Mahmoud Abbas signed on to help. Despite the dire financial straits of the PA, ending the strike promises Abbas some peace and quiet on the prisoners’ front, allowing him to focus on what is truly important to him — diplomatic issues.

After Abbas agreed to pay for the second visit, an announcement was sent to the IPS, which set up a meeting with the Palestinian inmates at the Shikma prison. Barghouti was brought there from the prison where he is serving his sentence, but by the time he got there the meeting had already begun. Present were Karim Younis (an Israeli Arab who murdered soldier Avraham Bromberg in 1981), Nasser Abu Hamid (Barghouti’s deputy in the Tanzim [the Fatah paramilitary force], who was convicted of seven murders and sentenced to seven life terms), and Ahmed Barghouti (a relative of Marwan’s who was his right-hand man in the Tanzim and is serving a 13-year term).

“We let them decide,” the Palestinian source said shortly after the decision. “The month of Ramadan is starting when they won’t even be allowed to drink water during the day, and if they had refused, the other prisoners might not have gone along with them.” Barghouti probably realized that Israel and the PA had coordinated their positions and that if he were to reject the deal, the rope that Abbas had given him to climb down from his demands might end up around his neck. At four in the morning, word came out that the prisoners’ hunger strike had ended and the Ramadan fast had begun.