What's behind coordinated attacks by Hamas inmates in Israeli jails?

Faced with a huge crisis, Hamas is trying to divert local pressure in the Gaza Strip away from its leadership by increasing unrest among Hamas prisoners in Israel. 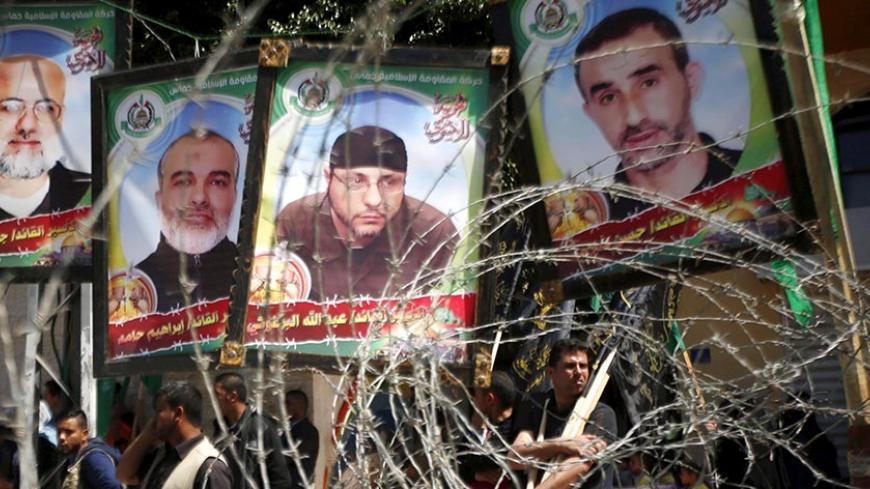 Even after the Israel Prison Service (IPS) transferred 30 Hamas prisoners from Nafha Prison to other facilities, as reported by Hamas-run Al-Aqsa TV on Feb. 2, there is still a feeling of unrest in those facilities in which Hamas prisoners are incarcerated. The moving of prisoners from one facility to another was attempted in the past to deal with riots that broke out in security prisons and to break the centers of power that emerged among the Palestinian prisoners.

Over the years, this method proved itself and became a routine preventive measure. Whenever a cohesive and influential leadership surfaced and began to accumulate status and power within the prison walls, its members were moved to a new environment, where they were forced to re-establish their reputations among the more veteran prisoners.

Preceding the transfer of these 30 prisoners were two incidents in which prison guards were stabbed by Hamas prisoners. The first took place in the Ketziot facility. The second occurred in Nafha Prison, which was created in 1980 near the remote Israeli town of Mitzpe Ramon in the south, in an effort to isolate the prisoners' leaders from the rest of the incarcerated population. Originally, the movement's leaders were transferred there from other prisons across the country. Now Nafha holds the most egregious offenders, sentenced to lengthy prison terms, usually life.

According to the IPS, the fact that the two incidents occurred simultaneously on Feb. 1 is proof that they were influenced and coordinated by sources outside the prison walls. The stabbing of the guards led to the worsening of conditions for all Hamas prisoners, which in turn resulted in clashes with the prison authorities. Leaders of the Hamas prisoners were put in solitary confinement, while sanctions were imposed on the other prisoners. These included the cancellation of family visits, bans on purchases at the prison canteen and transfers to other prisons. All of this was intended to shake up the balance of power between the various prison wings.

The IPS believes that the tense atmosphere among Hamas prisoners, as expressed in the frequent clashes with the guards and attempted attacks within the prisons, is the direct result of an order from the leadership of the military wing of Hamas in Gaza. The Hamas military leaders want to instigate conflict between the prison administration and the incarcerated Hamas members.

Palestinian prisoners are kept in different wings, based on their organizational affiliation. Qadura Fares, the director general of the Palestinian Prisoner Club in Ramallah, told Al-Monitor that there are some 7,000 Palestinian security prisoners currently held by Israel, including 1,800 Hamas prisoners. He said that there is almost no direct contact between Hamas prisoners and prisoners from Fatah or other organizations, though they sometimes find ways to pass messages to each other. This occurs mainly when they feel a common threat to the conditions of their imprisonment.

Elections for the Hamas prison leadership were held in January. These are democratic elections, which take place in all Israeli security prisons. The person with the most votes is appointed "emir," or leader of the prisoners' wing of Hamas. Together with the political, military and diaspora wings they make up a movement with many heads.

The winner of the last elections was Muhammad Arman, who was a member of the cell that served as an intermediary between Hamas and the Silwan cell, which launched a series of major attacks during the second intifada (2000-2005). Arman received 36 life sentences for his role in the murder of 36 Israelis. Abbas al-Sayad, the planner of the attack on the Park Hotel in Netanya in 2002, was elected deputy leader of the prisoners.

A source in the Palestinian Authority claims that these elections caused considerable tension among the prisoners. The two people elected to leadership positions are not only the most dangerous prisoners, they also advocate the harshest and most uncompromising attitude toward the IPS and the local prison leadership. The Palestinian source also confirmed that unrest among Hamas prisoners in Israeli prisons was, in fact, ordered from above in order to foment turmoil throughout the prison and to motivate Israel to agree to a full-blown prisoner exchange, instead of the humanitarian prisoner exchange proposed by Israel and rejected by Hamas.

Fares claims that current tensions can be attributed to the punitive measure that the Israeli government has decided to take against Hamas prisoners, adding that these tensions could intensify and spread to the other prisons, too. He is referring to the Jan. 1 security Cabinet decision to subject Hamas prisoners to harsher conditions. This was intended to pressure the movement's leadership to agree to a sensible deal that would result in the return of the bodies of soldiers Oron Shaul and Hadar Goldin, who were killed in the 2014 Gaza war, as well as two Israeli civilians who are currently being held captive by Hamas.

In practice, it seems as if worsening prison conditions failed to provide the impetus as hoped. Instead it resulted in unrest, while the leadership of the Hamas military wing dug its heels in and refused to budge on its demands.

An Israeli security source told Al-Monitor on condition of anonymity that the tense atmosphere in the prisons, the violent propaganda film posted recently by Hamas on social networks and the latest rocket fire in an attempt to heat up the sector are all proof that Hamas is facing a huge crisis and that it is trying to deflect local attention away from the movement's leaders. The source said that Israel should act wisely and cautiously, "because it has long been proved that even if neither of the parties is interested in a large-scale escalation or armed conflict, it would take just one mistake for everything to spin out of control," as happened in Operation Protective Edge in 2014.