Even locked in Israeli prisons, Hamas members contribute to the movement's decision-making process by holding leadership elections every two years. 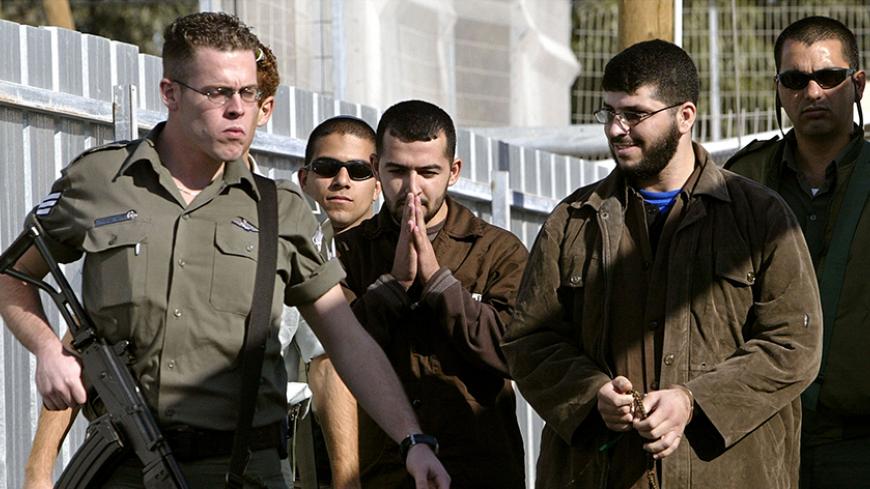 Palestinian Mohammed Arman (2nd-R) is escorted for sentencing into the military court at Israel's Ofer army base in the West Bank, Nov. 30, 2003. - David Silverman/Getty Images

Hamas members incarcerated in Israeli prisons recently held elections to determine their leadership for 2017-19. Although these elected members remain behind bars, they have great influence within the Hamas leadership outside prison and they weigh in on major Hamas decisions.

Prisoners participated in all 22 Israeli prisons, including the largest — Ketziot — as well as Ofer, Ramon and Megiddo. There are about 1,800 Hamas prisoners among 7,000 total Palestinian prisoners from different factions, according to Riyad al-Ashqar, the former director of the media office in the Palestinian Ministry of Prisoners Affairs in the Gaza Strip.

The elections, held in late January, determined the "supreme leadership body" for all Hamas prisoners.

“These elections took place over four stages," Abdel Rahman Shedid, the director of the Asra Media Office, a Palestinian prisoner rights advocacy group, told Al-Monitor. "In the first stage, 360 members representing the Hamas General Conference were chosen to elect the Shura Council, composed of 51 members distributed over the various prisons. The second stage was held to elect the 11 members of the supreme leadership body from among the members of the Shura Council. The president of the body was elected in the third stage, and his deputy in the fourth."

Moussa Doudine, who is in charge of prisoner affairs for Hamas, spent 18 years in Israeli prisons and was deported to Qatar in 2011. He told Al-Monitor about the significance of prison elections, which have traditionally been held every two years since they began in 2004.

The electoral process is a formal one, Ashqar, the former media office director, told Al-Monitor.

“Hamas prisoners inside Israeli jails have a detailed electoral system that outlines the electoral process in full, starting with the eligible voters and candidates, schedules, committees supervising the process, the electoral ballots, the electoral statement, all the way to the announcement of the election results," he said. "The system also covers the time limits and ways of dealing with post-election objections.”

Apparently, no matter where elections are held, they are steeped in bureaucracy. Mohammad Sabha, a senior Hamas prisoner in the West Bank who was released by Israel in May 2015 after 15 years in prison, confirmed this. He previously served as president of the prisoners' supreme leadership body.

“Elections start with forming central committees in every prison, with subcommittees in every department supervising the electoral process and composed of three prisoners. The subcommittees report to the central committee," Sabha told Al-Monitor. "On election day, prisoners are gathered in the prison yard. The committee members sit at a table with the ballot box, while prisoners cast their votes and the box is closed in front of them. In some prisons, ballots are distributed to prisoners inside their cells through food and cleaning prison workers."

The election results are communicated to prisoners through smuggled cellphones or by lawyers. The ballot is secret, as prison electoral law prohibits electoral propaganda and campaigning.

Commenting on the Israel Prison Service's (IPS) stance regarding these elections, Doudine said, “The IPS does not facilitate the electoral elections, of course. The elected prisoners are [often] isolated in other departments inside prisons. But eventually, the IPS has to deal with the elected members as they are the representatives of prisoners; otherwise, this would lead to unwanted chaos in Israeli prisons, which would cause [the IPS] trouble.”

Ashqar said, “Often, the IPS does not interfere in the electoral process inside prisons, as it deems it an internal affair for Hamas prisoners. However, if dangerous prisoners, as per Israeli classification, are likely to win the elections, the IPS tries to hinder the process by transferring prisoners with high chances of winning between prisons until the end of the elections.”

Hamas is keen on involving all its prisoners in the election process without exception. However, the prisoners who are about to finish their time in prison are only allowed to vote, not run, in the elections.

Hamas' prison supreme leadership body manages the movement’s affairs inside Israeli jails, representing prisoners from the West Bank, Jerusalem, the Gaza Strip and the Arab citizens of Israel. Most of the prison body members are young, classified as dangerous and are serving lengthy prison sentences. They are the ones whom Israel refused to release in the 2011 prisoner swap deal with Hamas in the West Bank.

Most of the members elected are affiliated with the leadership of the Izz ad-Din al-Qassam Brigades, Hamas’ military wing, who are sentenced to life in prison.

Local elections also are held to determine the leadership in every prison, Mohammed Hamada of Jerusalem told Al-Monitor. Hamada, who served 14 years in an Israeli prison and was deported to Gaza in 2011, said prisoners are elected to serve as the prisoners' version of a warden, his deputy and committee members who handle security, finances, culture and social issues. Members are elected for six months.