Despite being locked away in Israeli prisons, Hamas members elect a new leadership body every two years that wields great influence within the movement and participates in its major decisions. 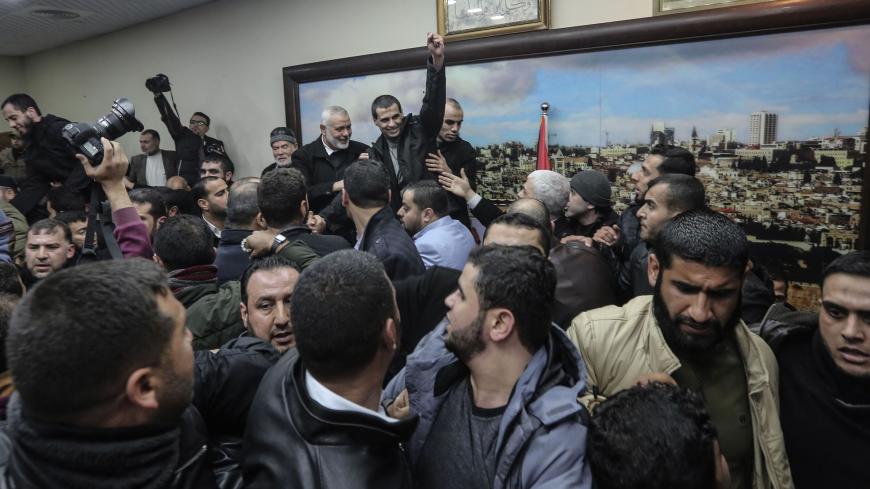 Members of the Palestinian Islamist Hamas movement are greeted by supporters at the movement's leader Ismail Haniyeh's office in the Gaza Strip on Feb. 28, 2019. - MAHMUD HAMS/AFP via Getty Images

The elected members, all prisoners, are in charge of organizing the administrative, cultural, political and financial affairs for Hamas prisoners.

The new body, which includes prominent figures from Hamas’ armed wing the Izz al-Din al-Qassam Brigades, will serve from Jan. 1, 2021, to the end of 2023. The elections are held every two years.

The election process is a complex undertaking, as the IPS bans such organizational activities. There is a risk that the IPS could hinder the election by placing the candidates with best chances of winning in solitary confinement.

One of the members of the new elected body spoke to Al-Monitor from inside the prison on condition of anonymity for security reasons. He said that the election process took over four months. All Hamas prisoners in all Israeli prisons and detention centers participated through secret balloting over stages, he added.

The member explained that in the first stage, prisoners elect the Shura Council, whose 51 members are distributed across 22 Israeli prisons and detention centers. In the second stage, the Shura Council elects the 11 members of the supreme leadership body from among itself, while four other people are appointed as wardens of the four major prisons — al-Naqab, Ofer, Ramon and Megiddo. These 15 people elect the president and his deputy in a third round.

He added that there is a 15-day period for challenging the electoral results and after that the winning members of the body are announced. The president becomes a member of Hamas’ political bureau.

He indicated that the role of the body is not limited to managing the affairs of prisoners but participates in many decisions and steps taken by Hamas, specifically in major issues such as prisoner swaps. The 2011 Gilad Shalit prisoner exchange was greenlit by Hamas’ prison leadership body headed by Rouhi Mushtaha. It also weighs in on Hamas’ political decisions and projects and its relations with the various factions and components of the Palestinian people.”

“Hamas prisoners have developed over many years an electoral law of their own that governs the electoral process,” he said. “This law is amended and updated from time to time to keep pace with developments in prisons in terms of security or the number of Hamas prisoners, which changes one year to the next.”

The first prison elections were held in 2004 in the wake of the strike staged by Palestinian prisoners in Israel at the end of September 2004 in protest against the conditions of their detention. The prisoners discovered a need for a unified and well-established leadership body that makes decisions on strikes and other issues. The first prison leadership body was formed in 2005.

Some Hamas prisoners oppose the elections, citing the difficulty in communication across different wards and prisons as well as the constant danger of the IPS foiling the elections. So far, the Hamas leadership has managed to overcome these obstacles in several ways. Communication between prisoners is maintained through mobile phones smuggled in and messages are conveyed by lawyers and via secret channels.

Hamas leader and former prisoner Mahmoud Mardawi told Al-Monitor that electing the prison leadership body is done as democratically as all the movement’s processes.

Mardawi went on, "The leadership body for Hamas prisoners is an essential component of the Hamas leadership in general,” he said. “No decision is made without its participation.”

Prisoners from Hamas and other Palestinian organizations have always played a role in the internal Palestinian reconciliation process. In 2006, leaders of factions in Israeli prisons issued a national conciliation document known as the Prisoners' Document, offering a plan to reconcile the factions and form a government of national unity.

Of note, Hamas' first general leadership included some prisoners to participate in Hamas’ electoral lists in the 2006 legislative elections. Hamas won the elections that year and consequently took control of the Gaza Strip.

Alaa al-Rimawi, a former prisoner and the director of Al-Quds Center for Israeli and Palestinian Studies in Ramallah, told Al-Monitor, “By conducting the election process and announcing the winners, Hamas aims to create a state of organizational discipline among its members in Israeli prisons and create an elected body that can ensure communication between the movement outside the prisons and the prisoners.”

He pointed out that Hamas also wants to send a message to the West and Israel that it manages its organizational affairs democratically. “Hamas gives young leaders the opportunity to become active in partisan work. The majority of the members of the newly elected body are young men,” he added.