Getting ahead in Hamas: It helps to have street cred

Young people are finding it difficult to move up the ranks in Hamas, as senior positions are usually reserved for prominent figures such as religious scholars, parliament members and those who have earned their stripes in Israeli prisons. 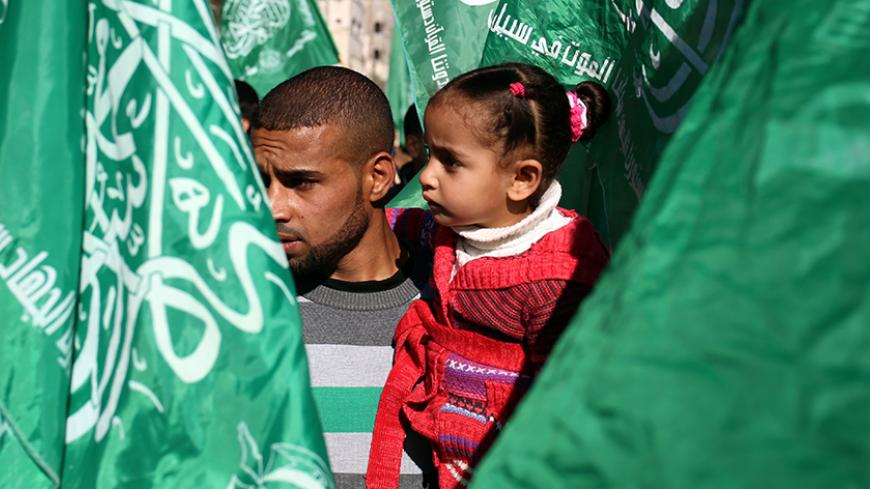 Supporters of the Palestinian Hamas movement stand between Hamas flags as they attend a rally to commemorate the 29th anniversary of the movement, Jabaliya refugee camp, northern Gaza Strip, Dec. 9, 2016. - MOHAMMED ABED/AFP/Getty Images

Hamas is celebrating its anniversary this month, with thousands of young people participating in mass rallies in the Gaza Strip to commemorate the group's founding on Dec. 14, 1987.

The fundamentalist Islamic movement's young people are active in its organizational and partisan bodies and are a valuable asset when it comes to armed operations. This is why Hamas’ youth are seen as the main driving force of the movement’s field operations. Yet its younger members are noticeably absent in leadership positions.

On Nov. 27, the first International Youth Conference was held in Gaza and drew many of Hamas’ figureheads and leaders to discuss young Palestinians' issues and needs. Al-Monitor held a series of meetings with Hamas officials from various levels, who expressed different positions on why young members aren't moving up in the ranks. Some officials blamed the young people themselves, while others said Hamas’ charter impedes their progress.

Hamas spokesman Hazem Kassem told Al-Monitor, “Hamas is a young movement established [almost] 30 years ago and has thousands of young members. There are no regulations preventing its young members from advancing, and indeed some of Hamas’ Shura Council members are under the age of 40.”

“Leadership in the movement is of a patriarchal nature and this requires older figures with prominent and extensive experience at the administrative and security levels, as well as with respect to Hamas’ Dawa [socio-economic infrastructure] and partisan activities. This kind of experience is only available in the older generation and veteran leaders who have a historical presence, and might hinder young people's access to leadership positions,” he said.

Youssef, a prominent reformist Hamas figure who heads the House of Wisdom Institution for Conflict Resolution and Governance in Gaza, added, “Sometimes, Hamas’ leadership invokes excuses to limit the leadership positions to a specific category of historical leaders from among the former prisoners who survived the cruelty of Israeli prisons. Hamas has its own regulations, laws, electoral mechanisms and secretive nature. It does not allow campaigning, where a candidate may introduce his ideas and [platform] to convince the cadres of the movement that he has the competence and the capability to earn their vote and to represent them.”

He continued, “Unfortunately, in light of the movement’s internal electoral process, prominent figures — such as imams and preachers or former detainees in Israeli prisons, or figures who frequently make public appearances on national and religious occasions — are the most likely to win, instead of academics and people with outstanding capabilities and competencies, who would have limited public exposure.”

Ihab al-Ghusain, a former Hamas government spokesman and one of the youth leadership figures in Hamas, told Al-Monitor the movement has no specific regulations against young leaders.

"But these young members are required to prove their organizational abilities and political and field performance that allow them to grow and assume higher positions. Then, no one will stand in their way. Yet experience and seniority are needed to progress within Hamas,” Ghusain said.

Perhaps one of the most important organizational entities in Hamas that is made up of young partisan members is the Islamic Bloc, Hamas’ student wing, which carries out its activities at universities and schools.

Over the years, the Islamic Bloc (al-Kotla al-Islamiyyah) has produced model student activity leaders who grew up to hold important political and military positions within Hamas, such as Ismail Haniyeh and Yahya Sinwar in the Gaza Strip, and Jamal Mansour and Yahya Ayyash in the West Bank.

“In terms of public activity, Hamas relies on tens of thousands of young members from among students and universities' staffs," Hani Mokbel, head of the Islamic Bloc, told Al-Monitor. Any of these young members are able to hold leadership field positions. "But as we go higher in terms of leadership levels, we see that young people’s representation becomes limited, probably because of [unofficial] age standards within Hamas.”

Sari Orabi, a Palestinian expert on Islamist parties, told Al-Monitor, “Field work in Hamas is based on young members, but this is not reflected in the upper echelons of Hamas and remains limited at lower levels. Young members’ presence in political and regulatory decision-making circles is also very limited. This is why Hamas’ leadership is restricted with little alternation of power.”

He continued, “Some of Hamas’ current leaders are from among those who contributed to the movement’s foundation when they were young in the late 1970s and early 1980s. Those founders remain today at the top of Hamas’ organizational chart, although some are very old.”

The 12-member political office, which is the highest leadership body in Hamas, has no members under 50 years old; some members are in their 60s and 70s.

Some observers say Hamas' dearth of young leaders has more to do with Israeli actions in the West Bank than a hierarchical organization strategy within Hamas.

It seems that new, young Hamas members are able to access the movement’s higher echelons once they have been arrested by Israeli authorities or have faced an attempted assassination. This phenomenon isn't as prevalent in places less affected by Israeli measures, such as Gaza and abroad.

One youth activist, however, said Hamas seems to be changing, slowly.

“Hamas is showing increasing interest in its youth category," Mohammed Abu Shkian told Al-Monitor. "It created in late 2015 a department dubbed the youth department, and began expanding its communication with young people in cultural clubs and centers, rather than limiting itself to mosques. An intellectual evolution is palpable within Hamas’ youth, which have been claiming a larger representation at the leadership level. Indeed, Hamas has formed committees to provide young people with leadership training.”

Yet, leadership alternation in Hamas is still subject to historical influences. Those are coupled with a lack of interest or ability to create regulatory solutions to provide young members with greater influence. If the same people, with the same attitudes, remain in charge of organizational and political decision-making indefinitely, it could age the movement and undermine loyalty among younger people.