The Hamas movement is keen to encourage women’s participation in military and social life, depending on women to mobilize support. 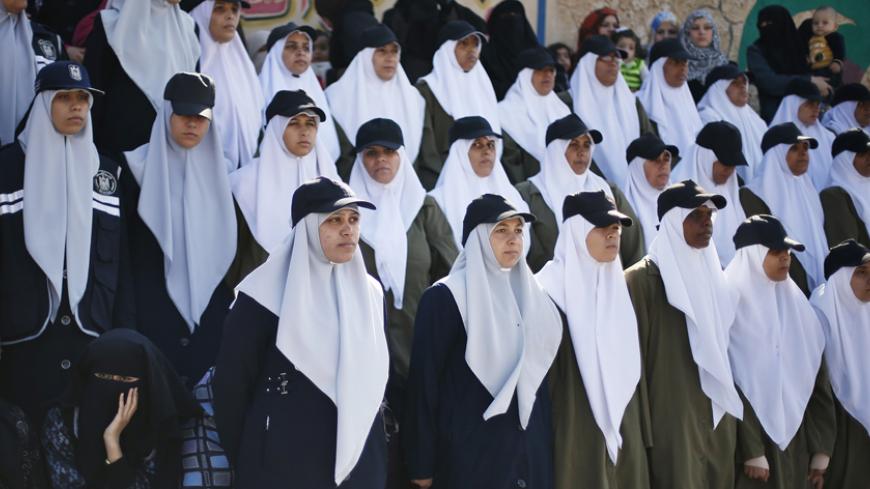 Since its inception in late 1987, Hamas has focused on women's activities, acknowledging the role of women in upbringing the individual, family and community. Hamas’ interest in women’s affairs has been evident since the early stages of the movement’s formation, when women occupied regulatory positions. Hamas formed the women’s work committee in the late 1980s as a regulatory committee like any other in the movement, with its own budget and public activities.

Rajaa al-Halabi, the head of the women's movement within Hamas, told Al-Monitor, “Hamas views women as a main pillar of Palestinian society, and not as subordinate to men. Since the movement’s inception, women have assumed advanced positions in Hamas and have left their marks in the various organizational committees, thanks to the directives of Sheikh Ahmed Yassin, the founder of the movement, who allowed in 1987 their access to senior positions within Hamas.”

Women play an essential role in Hamas both in terms of encouraging other women to support the movement or carrying out social tasks such as paying visits to citizens’ houses and spreading Hamas’ concepts among female workers and university students via the female wing of Hamas’ student arm, the Islamic Bloc.

Women within Hamas are capable of achieving significant popular mobilization and promote a religious discourse influencing Palestinian women in general, particularly those living in rural areas and refugee camps. Palestinians' conservative heritage goes in line with the religious dimensions of Hamas' political discourse.

The 2006 legislative elections represented a historic opportunity to highlight the role of women in Hamas. In a bid to encourage the participation of women in the elections, Hamas issued a statement Jan. 2, 2006, announcing its quest to elevate women, enact legislation that protects their rights and resist any attempts to marginalize their role. Six female Hamas leaders were elected to parliament in 2006: Jamila al-Shanti, Mariam Faraha, Samira Halaiqa, Mona Mansour, Huda Naim and Mariam Saleh. The former Hamas government also appointed Isra al-Mudallal as its first English-language spokeswoman in November 2013.

Despite this progress, do women’s efforts on the ground go in line with the leadership positions they hold in the movement?

Naim, a well-known female Hamas leader and member of the movement’s legislative council, told Al-Monitor, “There has been a positive shift in Hamas’ perception of women. After being [first] employed to mobilize people, they are holding leadership positions, starting with the municipalities, parliament and ministries. They have even started to look into leadership positions within the organization.”

Al-Monitor visited the headquarters of the women's movement within Hamas in Gaza City, and found a busy hive of women engaged in training, volunteer work, public relations and education committees.

Hamas’ increased interest in women can be attributed to its confrontation with Israel, as female members helped Hamas militants in some resistance actions without appearing publicly, its competition with secular forces and its need for women take on active roles. Thus, it has completely integrated women in its organizational apparatuses — not in a separate section — and they participate in the implementation of Hamas activities, but do not make decisions or create policies.

Halabi told Al-Monitor, “Women are not oppressed in Hamas, but they practice their roles and activities within the organization, in a way complementary to men in the movement, away from the dominance that others speak of. Women in Hamas are represented in the Shura Council, which is a senior organizational institution in Hamas.”

Naim, the rapporteur for the human rights committee in the Palestinian Legislative Council, told Al-Monitor, “Despite the important leap that was achieved in the recent years, the representation of women within the Hamas institutions needs to evolve, particularly in terms of their membership in Hamas’ political bureau. A debate is taking place behind the movement’s corridors to develop a certain perception on the representation of women in this senior body.”

It is important to distinguish between two important bodies within Hamas in which women seek to advance. The Shura Council, which holds a nonbinding consultative status for the leadership, includes several women. This is while the decisions of the political bureau, which consists of nearly 15 political and military leaders, are binding for Hamas, and it seems difficult for women to have access to them.

On the military level, Article 17 of the 1988 Hamas Covenant stipulates that the role of women in the battle to liberate Palestine is limited to the education of children and support for men.

It was not easy for women to participate in Hamas’ military activity, owing to Sharia bans, other religious constraints and social norms. For women to be trained by men and leave the house for long hours is not acceptable in much of Palestinian society.

Hamas’ perspective on women in active military roles was altered in January 2004, when Reem Riyashi perpetrated a suicide attack against Israel at the Erez border crossing in northern Gaza.

The Izz ad-Din al-Qassam Brigades announced in April 2007 the formation of the first female battalion within their ranks, where women receive military training, including physical and weapons training. This development in women’s military role in Hamas means that the movement has moved beyond the tenets of its founding covenant.

Hamas greatly relies on women today, especially when it comes to mobilizing the people and encouraging them to support the movement, particularly during elections and festivals. Yet, women are not being rewarded for their efforts on the ground by advancing to leadership positions within Hamas, given a number of legal and social constrictions. This means that women are progressing in Hamas slowly but steadily.