Will Fatah change approach to women during upcoming elections?

The Fatah movement in the West Bank and Gaza Strip is deploying efforts to avoid past mistakes and promote the role of women in the decision-making process ahead of the upcoming Palestinian general elections. 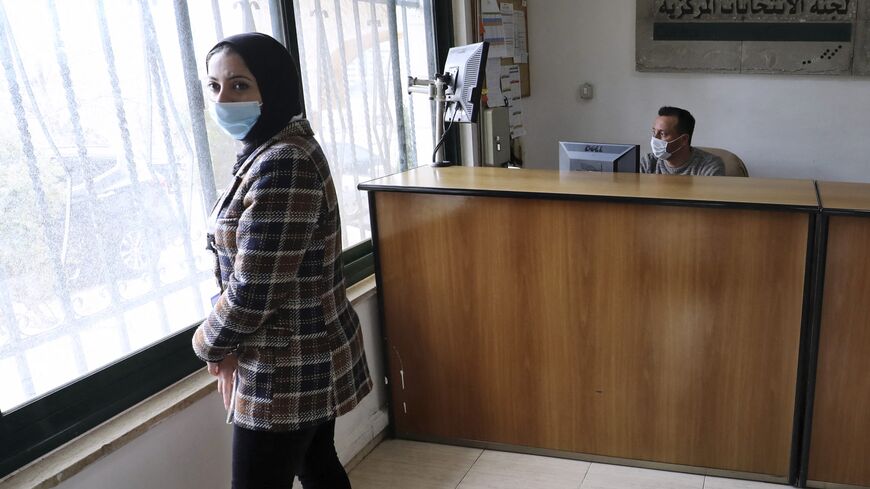 How big a role will women play in upcoming elections? Here, a woman stands in the headquarters of the Palestinian Election Commission in Ramallah in the West Bank on March 30, 2021. - ABBAS MOMANI/AFP via Getty Images

The Palestinian Fatah movement and the Democratic Reform Current headed by dismissed Fatah leader Mohammed Dahlan have been witnessing remarkable activity by female cadres ahead of the May 22 legislative elections in an attempt to avoid past errors, including overlooking the important role women play, that helped to Fatah's loss in the polls in 2006.

The neglect of women by the Fatah movement seemingly pushed women to vote for Hamas in the 2006 legislative elections, showing the need to enhance and renew women’s presence in Fatah’s leadership. This led Fatah’s Sixth Congress in 2013 to issue recommendations to promote women’s representation in the movement.

According to Article 116 of Fatah’s bylaws, “Women shall be represented in all the leadership frameworks of the movement, and leadership bodies shall guarantee them 20% at least such that this does not conflict with the applicability of texts and organizational criteria.”

However, the bylaws and recommendations have not been implemented, pointing to the marginalization of women in decision-making circles.

Kifah Farb, a member of Fatah’s Revolutionary Council in the West Bank, told Al-Monitor that the low level of women’s representation in Fatah is unjust. She added, “This applies to all Palestinian factions. There are calls for abiding by Palestinian Liberation Organization decisions for a 30% representation of women at the least.”

She said there are some indicators that the quota will be applied in Fatah’s candidacy lists, particularly since a January presidential decree dictated a quota of at least 26%.”

On March 11, Rashida Moghrabi, a member of Fatah’s Revolutionary Council, announced her resignation on her Facebook page; this was a sign of the marginalized role women play in the movement’s decision-making process.

Since the inception of the Fatah Central Committee decades ago, only three women have been members of the highest leadership body in the movement: Intissar Al-Wazir, Amal Hamad and Dalal Salameh. Only 10 women are members of the movement’s 112-member Revolutionary Council.

Subhiya al-Hasanat, a leader in the Democratic Reform Current, told Al-Monitor that one of the weaknesses of Fatah during the 2006 elections was its treatment of women as an “electoral reservoir,” saying the movement only attaches importance to women during elections.

Hasanat said, however, that neglecting women was not the only reason behind Fatah’s loss in the 2006 elections. She said Fatah had not properly prepared for the elections and had named candidates who did not enjoy popular support.

She said that since its formation, the Democratic Reform Current has been attentive to women by allowing their participation in decision-making at all organizational levels.

She said the percentage of women’s representation in the current’s list for the legislative elections will be between 25-30%. She said, “The list will include a mixture of women who have high capacity to do their duty, since the Palestinian Legislative Council is facing huge challenges due to the [Palestinian] division.”

In February 2017, the Democratic Reform Current established the Women’s Council in Gaza and tasked it with raising awareness about and further developing women’s roles in all academic, social and economic fields.

Abeer Thabet, a professor of political science at Al-Azhar University in Gaza, told Al-Monitor that a large number of qualified women are seeking to be candidates in the upcoming elections and that Fatah is insisting on the 30% minimum quota for women.

Rima Nazal, a writer on women’s issues, told Al-Monitor, “In most parties, the weakest women are selected on the electoral lists, and strong women are kept at bay, because weaker women are easier to manage.”

She called on voters, both men and women, to compare the parties’ electoral programs and performance so as not to be deceived by exaggerated wording in party platforms.

She said that blaming women in Fatah for the loss in the 2006 elections is imprecise and unscientific, because there weren’t ballots reserved to men and others to women. It is impossible to know who the women voted for, she added.

Writer and political analyst Hani Habib told Al-Monitor that all factions, including Fatah, attach theoretical importance to the role of women in decision-making, but added, “There is a gap between the media and political discourse and representation on the ground, because there is no societal or real partisan culture granting women their place.”