Palestinian feminist movements are discussing with PLO factions the possibility of increasing the female quota system, while women’s representation within Hamas remains timid. 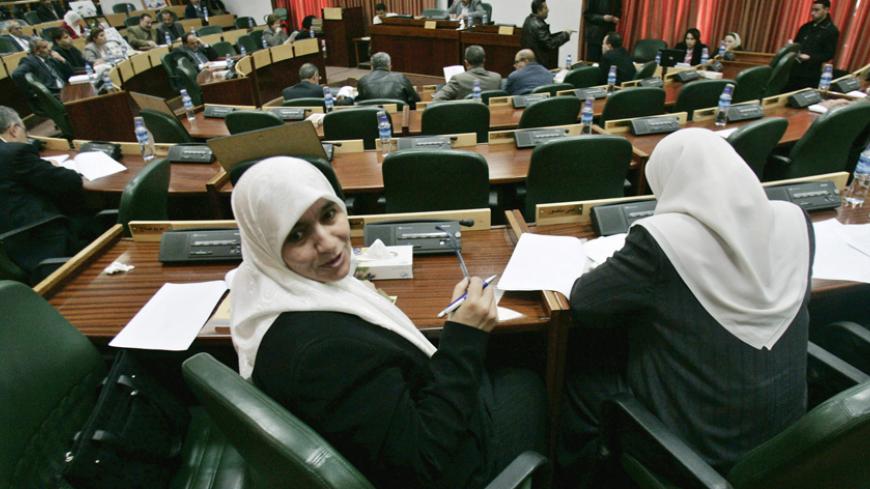 GAZA CITY, Gaza Strip — A video of a Jordanian parliament session went viral Dec. 3. The clip, shared widely as “Sit down, Hind!,” shows parliament member Yahya al-Saud cursing the quota system that brought female member Hind al-Fayez to parliament in 2013 after he repeatedly demanded that she sit down and listen to him. Though it may have angered some, the quota system is the only solution guaranteeing the presence of women in Arab parliaments.

In comparison to five women elected to parliament in 1996, 17 women won in the 2006 parliamentary elections, following feminists’ struggle to impose a 20% quota for women. Today, in coordination with feminist organizations, the General Union of Palestinian Women (GUPW) is preparing to increase the quota to 30%.

On Jan. 5, the GUPW started organizing meetings with the Palestine Liberation Organization (PLO) parties as well as with teachers, journalists and lawyers unions to discuss the increase in female representation in their councils.

GUPW activist Nawal Zaqout told Al-Monitor that there is intensive work going on to raise the quota that guarantees the presence of women in unions, political parties and parliament. She noted that this activity is part of a leap forward in the promotion of women’s participation in political decision-making positions, in collaboration with the UN Women organization.

She added, “So far, there is unanimous consent [during the GUPW meetings] on raising the women's quota in Gaza and the West Bank, including Jerusalem, to 30%” from 20%. She stressed the need for a quota in a patriarchal society.

On why the demand to raise the quota has increased at this particular time, feminist activist Andalib Adwan said that the parliamentary and presidential elections, which could be announced at any moment, must be prepared for. It is time for the feminist movement to apply pressure for the electoral law to be amended.

She told Al-Monitor, “A 20% quota was required in the 2006 elections, yet only 13% was achieved. For this reason, we are now demanding that the quota be raised to 30%, so that at least 20% of parliament seats are gained by women.”

It is noteworthy that the only competitor to candidate Yasser Arafat in the first Palestinian presidential elections in 1996 was a woman, feminist activist Samiha Khalil.

During the 2006 parliamentary elections, the West Bank allocated the 20% quota for women according to the proportional representation system, including half of the parliament’s seats, while the other half is subject to the electoral district system, which does not have a quota.

Hamas-affiliated parliament member Huda Naim told Al-Monitor, “Although the quota system does not awaken in me a sense of rivalry and competition with men, it is important at this stage.”

She added that women are unlikely to win in the elections without the quota system, and noted that no independent female candidate has won in the West Bank and Gaza without the support of the party she is affiliated with. The quota system, she said, is only applied in patriarchal communities that do not support women running for elections.

On the GUPW activities to increase the quota, Naim said that women in Hamas, including herself, are not asked to participate in the GUWP and feminist institutions’ activities for political and formal considerations.

She added, “I definitely support the 30% quota increase. We need more women in parliament to endorse laws that treat women fairly. Extraordinary efforts are [currently] needed to pass women's rights laws, given the lack of female parliament members.”

“The Shura Council is the only Hamas body where women are integrated, while there is a female counterpart to all other male-dominated bodies,” she said.

For women to win a large number of seats in the next election, more than the quota increase is needed. A shift to the proportional representation system is required, rather than the current parallel voting system. In the current voting system, 50% are elected through a proportional representation system, with the other 50% elected through contests between individual candidates in multi-member districts. The latter is highly influenced by families and tribes rather than the party-list system, heavily contributing to why women have been losing.