A political activist’s claim that the "For the Love of Egypt" alliance — which won many seats in the latest parliamentary elections — was established under the supervision of the intelligence services has divided Egyptians. 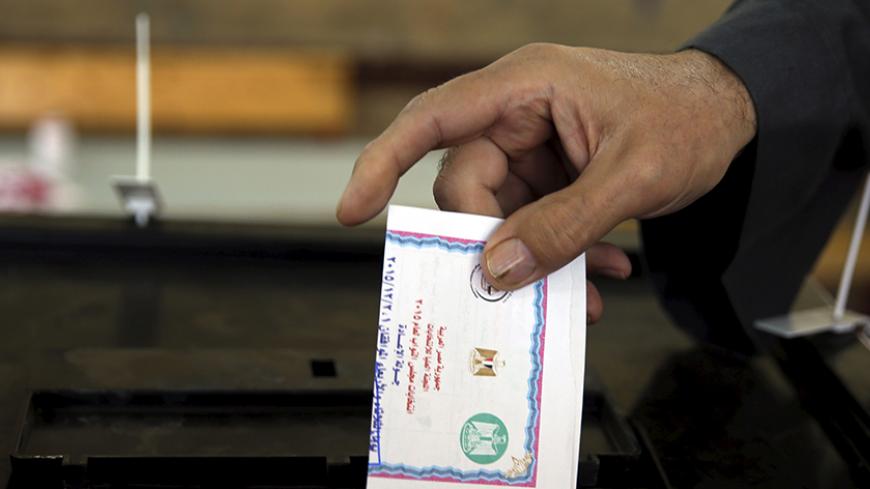 A man casts his vote at a polling station during the second phase of the parliamentary election runoff in Toukh, El-Kalubia governorate, northeast of Cairo, Dec. 1, 2015. - REUTERS/Amr Abdallah Dalsh

CAIRO — Complaints about Egypt’s recent parliamentary elections could indicate either electoral bias or just sour grapes, depending on whom you ask.

On Jan. 1, Hazem Abdel Azeem, a liberal political activist, posted on JustPaste.it “a testimonial on the president’s parliament.” He claimed that the For the Love of Egypt alliance, which won all 120 closed-list seats in the recent parliamentary election, was established under the supervision of Egypt’s General Intelligence Directorate and that the meetings about its establishment were held at GID headquarters.

Abdel Azeem said he was invited to those meetings, but he preferred to withdraw from the For the Love of Egypt alliance because of “the blatant interference” by the state agencies in the electoral process, considering it "non-neutral action," according to his post.

For the Love of Egypt’s electoral list included the Free Egyptians Party, the Wafd Party, the Nation's Future Party, as well as some independent candidates.

Yousri al-Azabawi, a researcher at the Al-Ahram Center for Political and Strategic Studies, told Al-Monitor Abdel Azeem’s claim was nothing new — merely a bid for attention that had “no political content and no repercussions, except for coverage in the media.”

“Politicians, analysts and probably many citizens already knew that For the Love of Egypt was formed under suggestions and calls from state agencies. Abdel Azeem’s testimony did not provide any evidence on the state’s bias for For the Love of Egypt in the electoral process. All of the countries make such arrangements, particularly amid deteriorating partisan life, as is the case in Egypt. This does not mean that the state showed bias during the elections,” he added.

In clarifying what is encompassed by the term “electoral process,” Azabawi said, “It consists of the enactment of laws regulating the elections, the reception of the candidates’ applications, the appeals, the campaigns, the voting, the vote count and the announcement of the results.” He explained that “the formation of alliances does not fall within the scope of official procedures for which the state's interference can be considered corruption in the elections and against the neutrality of its procedures.”

Legislation regulating elections is the first step in the electoral process Azabawi mentioned. The 2014 constitution grants appropriate representation in parliament for the youth, Christians, people with disabilities, workers and farmers under articles 11, 243 and 244. This is known as the quota system.

The quota system forced the legislative reform committee, which was tasked with drafting the electoral law, to use the closed-list system, because the party list proportional representation system allows each list to have representation in parliament, according to the percentage of votes it receives, which may not guarantee a proper representation of all of the quota groups.

Mahmoud Kbeich, a law professor at Cairo University, told Al-Monitor that the quota system cannot be used in the party list proportional representation system. He explained, “All or some marginalized groups, required to be represented according to the constitution, may be at the end of each list rather than the top of the list. The winners are those at the top of each list.”

Using the previous example with the same numbers, two Christian candidates — the first one is No. 7 on the For the Love of Egypt list and the other is No. 5 in Egyptian Front list — will never join the parliament if the elections will be done using party list proportional representation, because only the first six candidates of For the Love of Egypt list and the first four candidates of the Egyptian Front list will join the parliament according to the percentages of votes, which likely means that party list proportional representation can't guarantee the constitutional rights of the six groups of quota.

Some parties have suggested to the legislative reform committee that 40% of the seats should be won based on the party list proportional representation system, 40% for a plurality voting system [by individuals system, not a list], and 20% of the seats, which are reserved for the categories having a quota, be elected based on the closed-list system. Yet, the legislative reform committee considered it unconstitutional to combine two list systems in a single law.

Kbeich told Al-Monitor, “The Supreme Constitutional Court may have considered this law as defective, as it includes a clear discrimination in the electoral system used for the ordinary candidates and special categories candidates.”

Other political parties suggested that individual seats, rather than those reserved for the lists, be assigned to candidates of the special categories (those having a quota). Yet, Kbeich said, “It's impossible for the six categories to be represented in only three seats in governorates, such as the South Sinai governorate.”

Azabawi said, “All parties undoubtedly preferred the party list proportional representation system, because it guarantees that even the party winning 1% of the votes is represented in parliament. Moreover, they also preferred to adopt the usual division of constituencies. Yet, the Egyptian constitution is the reason why this system was adopted, while the committee tasked with the drafting of election law has no bias for or against any of the parties. This makes weak Abdel Azeem’s argument that the state is biased for the For the love of Egypt list or others.”

The international mission, which consists of two organizations to monitor the elections, along with a COMESA mission and local organizations, agreed that there were only minor violations and no counterfeiting during both rounds of the elections. The violations reported consisted of the use of bribes and campaigning around some polling centers — of which most alliances and candidates in the parliamentary elections were accused.

Regarding the candidate selection procedures, the Supreme Electoral Commission rejected six lists of candidates in the four constituencies for not completing their paperwork. However, the Administrative Court brought three of them back to the race after accepting their appeals.

The Nour Party said in an Oct. 22 statement, prior to the runoff of the first-round parliamentary elections, that it was subjected to security harassments. This came after the Nour Party list lost in the first round, and none of its individual candidates won any of the individual candidates’ seats in the first round. The party’s statement did not provide specific examples of the alleged harassment.

Naguib Sawiris, founder of the Free Egyptians Party, has said more than once that his party was harassed by security forces during the elections. This came after the party’s second-round election results declined, compared with the first round, also without providing specific examples of the alleged harassment.

Azabawi said, “Most of the complaints were probably made to justify the poor results of some parties. The elections were fair and transparent, as the monitoring organizations stated. The Administrative Court decided that many rejected lists [would] join the electoral race, which also makes Abdel Azeem’s argument weak.”