In accordance with the 2014 constitution, the disabled in Egypt are granted representation in parliament, which the Egyptian movement to empower people with disabilities is seeking to achieve through its We love Egypt list. 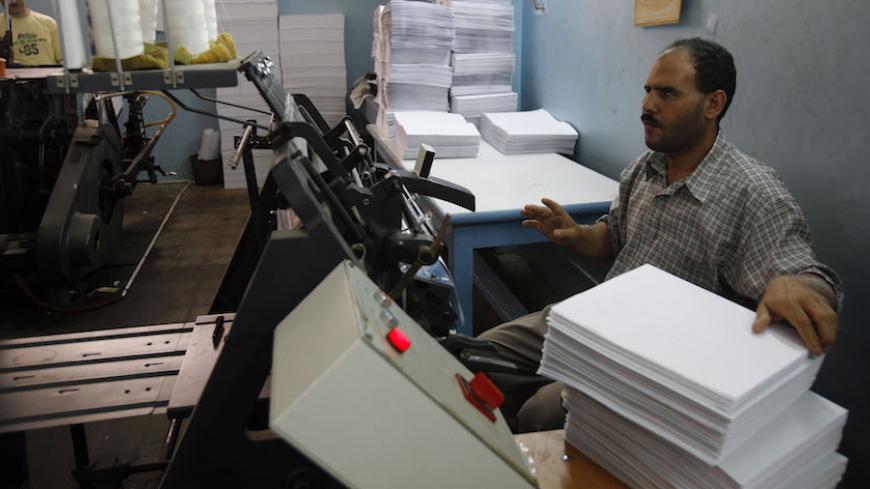 A blind Egyptian man works at a machine printing books using the braille system at the Model Center for Care and Guide the Blind in Cairo, May 15, 2008. - REUTERS/Asmaa Waguih

CAIRO — Article 244 of Egypt's 2014 constitution grants disabled Egyptians the right to appropriate representation in the next parliament. This representation has been set by the People's Assembly Law — which was considered unconstitutional in March and is currently being amended — at eight seats, out of a total of 120 seats of the electoral list system, representing one-third of the total parliamentary seats.

However, the Egyptian movement to empower people with disabilities believes that this quota is not enough. Hassan al-Sibai, the movement’s coordinator, told Al-Monitor that the constitution allocated a quota for those with disabilities for one parliamentary cycle, which has led Egyptian parties and electoral coalitions to deal with this group of voters as if their election was pro forma aimed at completing the lists' numbers.

Sibai explained that none of the people with disabilities who are qualified to represent the disabled community and their problems in parliament were selected, and he considered this to be inappropriate treatment of the disabled by the Egyptian political parties and coalitions.

According to Sibai, one of the biggest problems facing the disabled in Egypt — which requires their integration into political life — is that they face marginalization and are prevented from having access to jobs, health care and proper education suitable for their circumstances, generating major economic problems. “The people [with disabilities] who were chosen by the parties in their electoral alliances, do not suffer from these [economic] problems, as they are rich,” he said.

Masralarabia website published a report Jan. 12 on the request of parties, such as the Confrontation Party, to obtain contributions of 200,000 Egyptian pounds ($26,220) from the disabled in return for including them as candidates on the parties’ electoral lists.

On April 21, the Egyptian movement to empower people with disabilities announced in a statement its intention to field parliamentary elections with an independent list for the disabled called "We Love Egypt," given “the arbitrariness of political parties and coalitions in selecting persons with disabilities on their lists.”

Regarding the financing sources of We Love Egypt, Sibai said that the list will fund itself and the movement is not in need of extensive funding. He explained that the movement will not rely on advertisements but rather on a limited number of conferences in some areas to familiarize citizens with its electoral program, in addition to reaching out to the large base of disabled people in Egypt.

Karim al-Sayed, a professor of political science at Cairo University and a specialist in parliamentary affairs, told Al-Monitor that the Egyptian movement’s attempt to contest parliamentary elections with a list made up entirely of people with disabilities is a bold initiative that may contribute to a strong integration of people with disabilities in Egyptian political life.

According to the constitution, once disabled people are represented in one parliamentary cycle, they cannot run for another one, unless they succeed in pushing the parliament to issue a new law that guarantees people with disabilities a quota in other parliamentary cycles.

Sayed does not expect We Love Egypt to achieve good results, especially in light of the closed-list system that allows only one list to win and does not allow the competing lists to obtain parliamentary seats proportional to the ratios of the votes they obtained, as was the case in the dissolved parliament of 2012.

Sibai, on the other hand, believes that We Love Egypt can achieve success in obtaining the 45 seats it is competing for, thanks to the support of 12-14 million disabled people in Egypt. According to the law, each electoral list should include eight disabled candidates for at least eight parliamentary seats; the law does not specify the maximum number of seats people with disabilities can occupy.

The exact number of the disabled in Egypt remains unknown, as estimates range between about 700,000 to 14 million. The Ministry of Social Solidarity estimated in its official statements based on nonpublic reports issued by the Central Agency for Public Mobilization and Statistics (CAPMAS) that there were 700,000 disabled people in 2014. For his part, President Abdel Fattah al-Sisi estimated in December 2014 on Al Kahera Wal Nas TV the number of disabled people at 2-3 million.

Several media websites referred to the World Health Organization (WHO) that currently estimates the number of disabled Egyptians ranging between 12 and 14 million. CAPMAS indicated in a 1996 report on the census of people with disabilities in Egypt — which the Economic and Social Commission for Western Asia (ESCWA) referred to as part of an event about disabled people held with the cooperation of ESCWA — that it is difficult to determine their numbers and that the census results were inaccurate.

The WHO report indicated that out of the total number of disabled people in Egypt, there are about 3 million who are mentally disabled and 4 million children under the age of 18 — neither category is entitled to vote. If the WHO estimates are accurate, the total number of eligible voters with disabilities would be about 5 million at the very least.

It is possible that We Love Egypt would achieve good results if it manages to mobilize this large voting bloc in its favor. The total number of people in Egypt eligible to vote is estimated at 53 million, as per the presidential elections in May 2014, and there are nine coalitions competing for the seats allocated to the winners under the electoral list system.